Last updated November 26, 2019
Not to be confused with Soulboy (film).

Soul Boy [1] is a 2010 Kenyan drama film, written by Billy Kahora and directed by Hawa Essuman. It developed under the mentorship of German director and producer Tom Tykwer in Kibera, one of the largest slums in the African continent, in the middle of Nairobi, Kenya. The film has received five nominations at the 2011 African Movie Academy Awards. [2]

The film originated in a workshop for young film enthusiasts from Nairobi, guided by German director Tom Tykwer.

Nairobi, Kenya. 14-year-old Abila lives with his parents in Kibera, one of the largest slums in East Africa. One morning the teenager discovers his father ill and delirious. Someone has stolen his soul, mumbles the father. Abila is shocked and confused but wants to help his father and goes in search of the right remedy. Supported by his girlfriend Shiku, he embarks on an adventurous journey that leads him right to the heart of the microcosm that is his hometown.

Andrew Onyango reviewing for KenyaBuzz was mesmerized by how much "surreal" the world of the movie is, adding that the scripts use of Swahili strengthened the film's impact: "The Swahili speaking audience (particularly those exposed to the dialect being used) feel a powerful sense of identification. There is nothing like hearing it firsthand because the translation loses some of the impact of the words." [58]

Prague International Film Festival - Febiofest is the largest film festival in the Czech Republic and the second most prestigious festival in the country. The festival presents a wide spectrum of contemporary and retrospective examples of high-quality film including alternative, film-school and amateur works to a diverse viewing public.

The cinema of Kenya refers to the film industry of Kenya. Although a very small industry by western comparison, Kenya has produced or been a location for film since the early 1950s when Men Against the Sun was filmed in 1952. Although, in the United States, jungle epics that were set in the country were shot in Hollywood as early as the 1940s.

From a Whisper is a Kenyan drama film written and directed by African Movie Academy Award winner Wanuri Kahiu. The film received 12 nominations and won 5 awards at the African Movie Academy Awards in 2009, including Best Picture, Best Original Soundtrack, Best Director, Best Original Screenplay and AMAA Achievement in Editing. The film also won the Best Feature Narrative award at the 2010 Pan African Film & Arts Festival, and was honored with the 2010 BAFTA/LA Festival Choice Prize. Although the film commemorates the 10th anniversary of the August 7th terrorist bombing in Kenya in 1998, it is not about the terrorist bombing. The movie portrays a realistic story of the aftermath of the bombing, by capturing the lives of the victims and their families who had to pick up the pieces of their lives shredded by the blast.

Flying Fish is a 2011 anthology film directed by Sri Lankan filmmaker Sanjeewa Pushpakumara. It was produced with the financial support of the Hubert Bals Fund of the International Film Festival Rotterdam (IFFR). The film made its world premiere on January 28, 2011, as part of the Rotterdam festival's Tiger Awards Competition.Film has been noted for its political value, beautiful cinematography, long takes, and shocking violence

Sanjeewa Pushpakumara born on 5 May 1977 in the Eastern Province of Sri Lanka, completed his Bachelor of Arts degree at the University of Sri Jayewardenepura in 2005. In 2008, he obtained his Master's degree in Mass Communications from the University of Kelaniya. Sanjeewa, pursued a diploma in film making at the Sri Lanka National Film Corporation in 2006. In 2007, Pushpakumara received a scholarship from the Korean Culture and Tourism Ministry under its Cultural Partnership Initiative (CPI), to study film-making in the Asian Young Film Forum and also to learn Korean language at Chonbuk National University (Korea).In 2014 he obtained his advanced degree in film-making from the Chung-Ang University in South Korea as a Korean Government Scholarship Holder (KGSP). In 2009, Sanjeewa was selected to the Asian Film Academy of Busan International Film Festival.He participated in Berlin Talent Campus in 2012.

Steven Markovitz is a South African film and television producer. He has produced, co-produced and executive-produced features, documentaries and short films. Steven has been producing and distributing for over 20 years. Since 2007, he has worked all over Africa producing documentary series and fiction. He is a member of AMPAS, co-founder of Electric South & Encounters Documentary Festival and the founder of the African Screen Network.

Nairobi Half Life is a 2012 Kenyan drama film directed by David "Tosh" Gitonga. The film was selected as the Kenyan entry for the Best Foreign Language Oscar at the 85th Academy Awards, but did not make the final shortlist, and is the first time Kenya has submitted a film in this category. 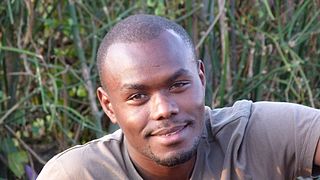 Veve is a 2014 Kenyan drama film directed by Simon Mukali. VEVE is a co-production of One Fine Day Films and Ginger Ink. 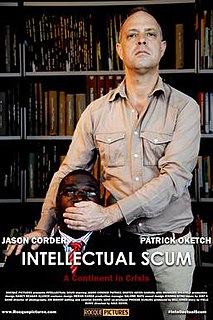 Intellectual Scum is a 2015 Kenyan short film directed by Njue Kevin. Produced by Rocque Pictures, the film is an adaptation of the controversial article 'You Lazy (Intellectual) African Scum!' by Field Ruwe, a USA based Zambian media practitioner.

Njué Kevin is a Kenyan film director, producer and screenwriter. He is best known for writing and directing the film 18 Hours which won the Best Overall Movie in Africa, AMVCA 2018. This category had never seen a Kenyan film be nominated, and so marked history as the first Kenyan film to be nominated and win in the history of the awards.

Judy Kibinge is an award-winning Kenyan filmmaker, writer and producer. She has produced, wrote, and directed a number of films such as Something Necessary (2013), Dangerous Affair (2002), and Project Daddy (2004) which are her well-known creations. She is also known for establishing DocuBox, a documentary film fund for African filmmakers to help them produce and distribute their film. She released her first film, The Aftermath, in 2002 and critics have stated that she uses her films to impart stories about Kenya, particularly those about women and others that are typically not told in mainstream Hollywood.

Kati Kati is a 2016 Kenyan drama film directed by Mbithi Masya. Kati Kati is a co-production of One Fine Day Films and Ginger Ink. At the 2016 Toronto International Film Festival, Kati Kati won the Prize of the International Federation of Film Critics (FIPRESCI) for the Discovery programme. It was selected as the Kenyan entry for the Best Foreign Language Film at the 90th Academy Awards, but it was not nominated.

The Cut is a 2017 Kenyan film directed by Peter Wangugi Gitau. 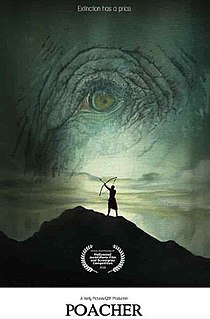