Stacy Szymaszek (born July 17, 1969 in Milwaukee, Wisconsin) is an American poet, professor, and arts administrator. [1] She was the executive director of the Poetry Project at St Mark's church from 2007 to 2018 and worked at Woodland Pattern Book Center from 1999 to 2005. She is the recipient of a 2014 New York Foundation for the Arts Fellowship in Poetry and a 2019 Foundation for Contemporary Arts grant in poetry. [2]

Szymaszek is the author of five books: A Year from Today (Nightboat Books, 2018), hart island (Nightboat Books, 2015), Emptied of All Ships (Litmus Press, 2005) and Hyperglossia (Litmus Press, 2009), [3] as well as Journal of Ugly Sites and Other Journals, which won the 2014 Ottoline Prize from Fence Books. [4] Her three newest books comprise a trilogy of diaries that trace her experiences in New York City. Szymaszek's work favors the long form and takes influence from New York School poets in incorporating and engaging with the everyday. Szymaszek's poems, as writer Kay Gabriel points out, work with Frank O'Hara's "I do this, I do that" mode of writing through experience and location. [5]

She has also authored numerous chapbooks of poetry, including austerity measures (Fewer and Further Press, 2012), Orizaba: A Voyage with Hart Crane (Faux Press, 2008), Stacy S.: Autoportraits (OMG, 2008) and Pasolini Poems (Cy Press, 2005). During her time in Milwaukee, she was the founder and editor of GAM, a free magazine featuring the work of poets living in the upper midwest. [6]

Szymaszek earned a B.A. at University of Wisconsin–Milwaukee. [7] She grew up in the Milwaukee area and attended Catholic schools before moving around in her early twenties, including a summer at Kate Millett's farm. From 1999 to 2005, she worked at Woodland Pattern Book Center in Milwaukee's Riverwest neighborhood. In 2005, she moved to New York City, where from 2007 to 2018 she was executive director of the Poetry Project at St. Mark's Church. [8] In 2018–2019, she was the Hugo Visiting Writer at the University of Montana. [9] [10] She now lives in Tucson, Arizona.

John R. Keene Jr. is a writer, translator, professor, and artist who was named a MacArthur Fellow in 2018. 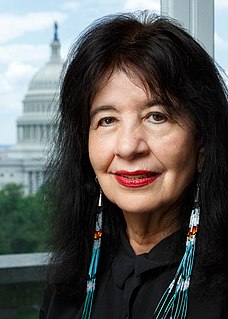 Joy Harjo is an American poet, musician, playwright, and author. She is the incumbent United States Poet Laureate, the first Native American to hold that honor. She is also only the second Poet Laureate Consultant in Poetry to serve three terms. Harjo is a member of the Muscogee Nation and belongs to Oce Vpofv. She is an important figure in the second wave of the literary Native American Renaissance of the late 20th century. She studied at the Institute of American Indian Arts, completed her undergraduate degree at University of New Mexico in 1976, and earned an MFA degree at the University of Iowa in its creative writing program.

Caroline Bergvall is a French-Norwegian poet who has lived in England since 1989. Her work includes the adaption of Old English and Old Norse texts into audio text and sound art performances.

Kathleen Fraser was a contemporary poet. She was a Guggenheim Fellow. 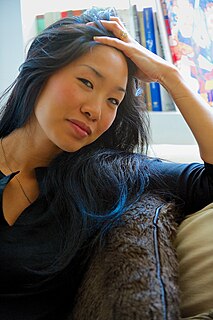 Tina Chang is an American poet, professor, editor, organizer, and public speaker. In 2010, she was named Poet Laureate of Brooklyn.

Douglas A. Martin is an American poet, a novelist and a short story writer.

Cole Swensen is an American poet, translator, editor, copywriter, and professor. Swensen was awarded a 2006 Guggenheim Fellowship and is the author of more than ten poetry collections and as many translations of works from the French. She received her B.A. and M.A. from San Francisco State University and a Ph.D. in Comparative Literature from the University of California, Santa Cruz, and served as the Director of the Creative Writing Program at the University of Denver. She taught at the Iowa Writers' Workshop at the University of Iowa until 2012 when she joined the faculty of Brown University's Literary Arts Program.

Gloria Frym is an American poet, fiction writer, and essayist.

Jessica Fisher is an American poet, translator, and critic. In 2012, she was awarded the Joseph Brodsky Rome Prize Fellowship in literature by the American Academy of Arts and Letters.

Rachel Zucker is an American poet born in New York City in 1971. She is the author of five collections of poetry, most recently, SoundMachine. She also co-edited the book Women Poets on Mentorship: Efforts and Affections with fellow poet, Arielle Greenberg.

Pamela Sneed is an American poet, performance artist, actress, activist, and teacher. Her book, Funeral Diva, is a memoir in poetry and prose about growing up during the AIDS crisis, and the winner of the 2021 Lambda Literary Award for lesbian poetry.

Christina Davis is an American poet most notably recognized for two collections of poetry that deal with philosophically questioning common ideas and emotions: An Ethic, published in 2013, and Forth A Raven, published in 2006. In An Ethic, Davis addresses the grief and darkness of a father's death, the challenges of conventional constructs of life on earth and an afterlife somewhere else. This seems to be a theme building on ideas she explored in Forth A Raven. She phases it simply as "There is no this or that world." As one reviewer wrote, "What follows is a rigorous meditation on this premise, a refusal of the notion that one passes from presence into absence, from life into death, as if by bridge or tunnel. Rather, presence and absence, life and death, coexist—and we are daily challenged to reconcile their simultaneity." 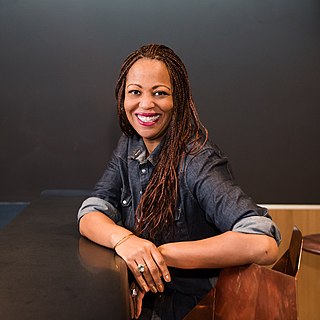 Samiya A. Bashir is an American lesbian poet and author. Much of Bashir's poetry explores the intersections of culture, change, and identity through the lens of race, gender, the body and sexuality. She is currently Associate Professor of Creative Writing at Reed College in Portland, Oregon.

Stacy Doris was a poet who wrote in English and French. Doris used the name "Madame Wiener" or «Sa Femme» in some of her French work.

Morgan Parker is an American poet, novelist, and editor. She is the author of poetry collections Other People’s Comfort Keeps Me Up At Night, There are More Beautiful Things than Beyoncé, and Magical Negro which won the National Book Critics Circle Award. She is also author of the young adult novel, Who Put This Song On.

Daniel Borzutzky is a Chicago-based poet and translator. His collection The Performance of Becoming Human won the 2016 National Book Award. 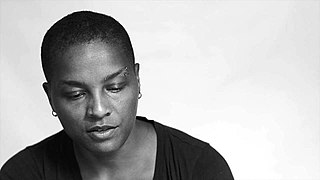 Dawn Lundy Martin is an American poet, essayist and activist. She has received a number of awards such as the Academy of American Arts and Science's May Sarton Prize for Poetry. Martin is currently faculty at University of Pittsburgh and director of the Center for African American Poetry and Poetics. Martin received the 2019 Kingsley Tufts Poetry Award for her book Good Stock, Strange Blood published by Coffee House Press.

Muriel Leung is an American writer. Her work includes the poetry collection Bone Confetti, which won the 2015 Noemi Press Book Award and Imagine Us, The Swarm, which received the Nightboat’s Poetry Prize. She has received multiple writing fellowships, and her work was nominated for a Pushcart Prize.

Kay Gabriel is an essayist and poet. Gabriel and Andrea Abi-Karam co-edited an anthology of trans and gender non-conforming poetry, titled We Want It All: An Anthology of Radical Trans Poetics, published by Nightboat Books in 2020. Her writing and poetry has appeared in The Brooklyn Rail, Social Text, The Recluse, andThe Believer amongst others. She lives and works in New York.