Standard Brands made several acquisitions. It bought Planters in 1960, and the Curtiss Candy Company in 1964. In 1979, it acquired Inver House scotch. [3]

The company merged with Nabisco in 1981 to form Nabisco Brands, Inc. [4]

Baking powder is a dry chemical leavening agent, a mixture of a carbonate or bicarbonate and a weak acid. The base and acid are prevented from reacting prematurely by the inclusion of a buffer such as cornstarch. Baking powder is used to increase the volume and lighten the texture of baked goods. It works by releasing carbon dioxide gas into a batter or dough through an acid–base reaction, causing bubbles in the wet mixture to expand and thus leavening the mixture. The first single-acting baking powder, which releases carbon dioxide at room temperature as soon as it is dampened, was developed by food manufacturer Alfred Bird in England in 1843. The first double-acting baking powder, which releases some carbon dioxide when dampened, and later releases more of the gas when heated by baking, was first developed by Eben Norton Horsford in the U.S. in the 1860s. 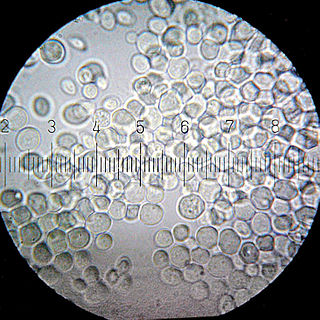 Baker's yeast is the common name for the strains of yeast commonly used in baking bread and other bakery products, serving as a leavening agent which causes the bread to rise by converting the fermentable sugars present in the dough into carbon dioxide and ethanol. Baker's yeast is of the species Saccharomyces cerevisiae, and is the same species as the kind commonly used in alcoholic fermentation, which is called brewer's yeast. Baker's yeast is also a single-cell microorganism found on and around the human body.

A biscuit is a flour-based baked food product. In most countries, particularly in the Commonwealth and Ireland, biscuits are typically hard, flat and unleavened. They are usually sweet and may be made with sugar, chocolate, icing, jam, ginger or cinnamon. They can also be savoury and similar to crackers. Types of biscuit include sandwich biscuits, digestive biscuits, ginger biscuits, shortbread biscuits, chocolate chip cookies, chocolate-coated marshmallow treats, Anzac biscuits, biscotti and speculaas. In most of North America, nearly all hard sweet biscuits are called "cookies", while the term "biscuit" refers to a soft, leavened quick bread similar to a scone; see biscuit (bread).

General Foods Corporation was a company whose direct predecessor was established in the United States by Charles William Post as the Postum Cereal Company in 1895. The name "General Foods" was adopted in 1929, after several corporate acquisitions, by Marjorie Post after she inherited the established cereal business from her father C. W. Post. In November 1985, General Foods was acquired by Philip Morris Companies for $5.6 billion, the largest non-oil acquisition to that time. In December 1988, Philip Morris acquired Kraft Foods Inc., and, in 1990, combined the two food companies as Kraft Foods. "General Foods" was dropped from the corporate name in 1995; a line of caffeinated hot beverage mixes continued to carry the General Foods International name until 2010.

Nutritional yeast, also referred to as nooch or hippy dust, is a deactivated yeast, often a strain of Saccharomyces cerevisiae, that is sold commercially as a food product. It is sold in the form of yellow flakes, granules, or powder and can be found in the bulk aisle of most natural food stores. It is popular with vegans and vegetarians and may be used as an ingredient in recipes or as a condiment.

Fleischmann's vodka is an 80 proof vodka distilled from grain.

Associated British Foods plc (ABF) is a British multinational food processing and retailing company headquartered in London, England. Its ingredients division is the world's second-largest producer of both sugar and baker's yeast and a major producer of other ingredients including emulsifiers, enzymes and lactose. Its grocery division is a major manufacturer of both branded and private label grocery products and includes the brands Mazola, Ovaltine, Ryvita, Jordans and Twinings. Its retail division, Primark, has some 384 stores across several countries, predominantly Germany, Ireland, Netherlands, Spain, and the UK. ACH Food Companies is an American subsidiary.

A saltine or soda cracker is a thin, usually square cracker made from white flour, yeast, and baking soda, with most varieties lightly sprinkled with coarse salt. It has perforations over its surface, as well as a distinctively dry and crisp texture. 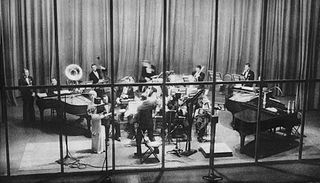 The Fleischmann's Yeast Hour was a pioneering musical variety radio program broadcast on NBC from 1929 to 1936, when it became The Royal Gelatin Hour, continuing until 1939. This program was sponsored by Fleischmann’s Yeast, a popular brand of yeast.

Fleischmann's Yeast is an American brand of yeast founded by a Hungarian-American businessman Charles Louis Fleischmann. It is currently owned by Associated British Foods and is sold to both consumer and industrial markets in the United States and Canada.

Julius Augustus Fleischmann was an American businessman, the long-time president of Fleischmann's Yeast, and a former mayor of Cincinnati. A bon vivant, sailor, and sportsman, he was the son of yeast magnate Charles Louis Fleischmann. 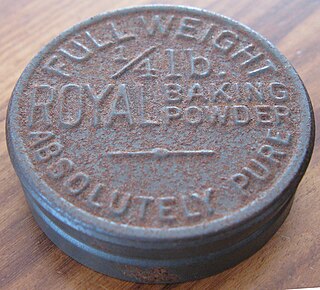 The Royal Baking Powder Company was one of the largest producers of baking powder in the US. 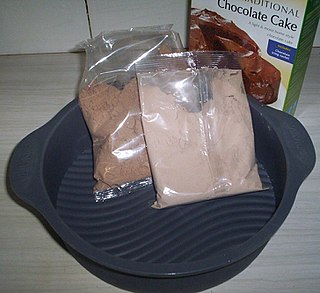 A baking mix is a pre-mixed formulation of ingredients used for the cooking of baked goods. Baking mixes may be commercially manufactured or homemade. Baking mixes that cater to particular dietary needs, such as gluten-free baking mixes or kosher baking mixes, can be bought in many places.

B&G Foods is an American holding company for branded foods. It was founded in 1889 to sell pickles, relish and condiments. The B&G name is from the Bloch and Guggenheimer families, pickle merchants in Manhattan. It is based in Parsippany, New Jersey and has about 2,500 employees. Kenneth G. Romanzi is the company's CEO and president. B&G has been publicly traded for more than a decade as of 2018 and has been acquiring orphaned brands as part of its growth strategy. Currently, B&G sells frozen and shelf-stable foods.