Steve Ella (born 28 July 1960) is an Australian former rugby league footballer who played in the 1980s. He was a utility back for the Parramatta Eels, New South Wales and Australia, playing in 4 Tests for Australia between 1983 and 1985. He is a cousin of the Ella brothers who were prominent in Australian rugby union in the 1980s.

Steve Ella had a ten-year career with Parramatta playing every position in the Eels’ backline, though mostly playing at either centre or five-eighth.

Nicknamed the "Zip Zip Man", Ella was a member of Parramatta's star studded backline of the early 1980s, alongside Brett Kenny, Mick Cronin, Peter Sterling and Eric Grothe, Sr.. It was only the presence of five-eighth Kenny and the partnership he had with halfback Sterling that saw Ella play most of his first grade games in the centres where Cronin he formed the NSWRL premiership's most lethal centre pairing alongside.

When Ella returned to Parramatta early in the 1986 season, his career took a downturn that began when he suffered a gashed hand in early May, [6] and then a shoulder injury in the Panasonic Cup semi-final against Manly. [7] This shoulder injury recurred in June [8] and again after Ella played two more games in July. [9] After an arthroscope revealed ligament damage in Ella’s shoulder, [10] he missed five more games but an intensive course in physiotherapy allowed him to return and participate in a fourth premiership team before a full-scale off-season surgery. [11] However, in his second match of 1987 Ella slipped his shoulder and missed the rest of the season after a series of shoulder problems. There would be an arthroscopy [12] in March featuring the removal of loose bone fragments, [13] and a second full-scale surgery at the end of May. [14] Steve Ella would return for the 1988 season and escape injuries, producing several very good displays for a struggling Parramatta team. [15] Steve Ella finished his career in 1989 as captain of Wakefield Trinity in 1988–89. Ella did return to Parramatta for the 1989 season, but did not play a single game due to injury. After a specialist advised him not to risk further damage to his shoulder, [16] Ella announced his retirement in July two weeks shy of his twenty-ninth birthday.

Ella scored 544 career points for Parramatta in 156 first grade premiership games putting him in third place on the club's all-time points list. In 1982 he was the season's top try-scorer and also set the club record with a total of 23 tries in a season, until Semi Radradra scored a total of 24 tries in the 2015 season thus breaking the record. He scored 92 career tries for Parramatta placing him in fourth place on the club's all time tryscoring table behind Jarryd Hayne, Brett Kenny and Luke Burt.

Steve Ella made seven State of Origin appearances for New South Wales between 1983 and 1985.

He was first selected for the Blues in Game 1 of the 1983 State of Origin series at Lang Park in Brisbane. After originally being named in the starting side, at the last moment Blues coach Ted Glossop decided to start veteran Manly-Warringah pivot Alan Thompson instead and play Ella from the bench. The late change didn't work and after a poor game from Thompson, Ella came on in the second half and scored a try to give NSW a chance at victory, though Queensland went on to win the game 24—12. He was then selected in the centres alongside Mick Cronin for Game 2 at the Sydney Cricket Ground where he scored a try in the Blues' 10—6 triumph in muddy conditions for their sole win of the series. That game was notable because other than fullback Marty Gurr from Eastern Suburbs, the entire NSW backline consisted of Parramatta players (Grothe and Hunt on the wings, Ella and Cronin in the centres and Kenny and Sterling the halves). The NSW side that night was captained by Parramatta captain Ray Price while Eels forward Stan Jurd was on the bench. He retained his place in the side for Game 3 of the series in Brisbane, though Qld, led by their captain and Test 5/8 Wally Lewis outclassed NSW 43—22 after leading by 33—0 midway through the second half. [17]

Ella then played Games 1 and 3 of 1984 and in all three games of 1985 when the Blues eventually had a series triumph over Queensland.

At the national level, he was selected for the 1982 Kangaroo tour of Great Britain and France and appeared in twelve minor games, though he didn't play a Test on tour. In the tour match against Wales in Cardiff, Ella scored four tries equaling the record for an Australian in a full international. On that same tour in a game in France against Aquitaine in Villeneuve he scored seven tries equaling a record set by Cec Blinkhorn in the 1920s.

Ella also made two appearances for NSW City. He made his first appearance for City in 1983, playing 5/8 and scoring a try in their 30—14 win over NSW Country in Newcastle. His last appearance, also in Newcastle, came in City's 18—12 win in 1985 with Ella again playing five-eighth. [19] 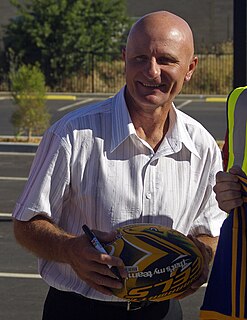 Peter Maxwell John Sterling OAM nicknamed Sterlo, is an Australian rugby league commentator, television personality and former player. He was one of the all-time great halfbacks and a major contributor to Parramatta Eels' dominance of the New South Wales Rugby League premiership in the 1980s. Sterling played eighteen Tests for the Australian national team between 1982 and 1988. He also played in thirteen State of Origins for New South Wales, winning man of the match on four occasions. Sterling played in four premiership-winning sides with Parramatta in 1981–1983 and 1986 and has been inducted into the Australian Rugby League Hall of Fame. His time spent playing for English club Hull F.C. also earned him membership in their hall of fame.

Eric "Guru" Grothe Sr., also known by the nickname of "Guru", is an Australian former professional rugby league footballer who played in the 1970s and 1980s. A New South Wales and Australian representative wing, he played club football for the Parramatta Eels with whom he won four NSWRL premierships. Since retiring, Grothe has been named amongst the nation's finest footballers of the 20th century 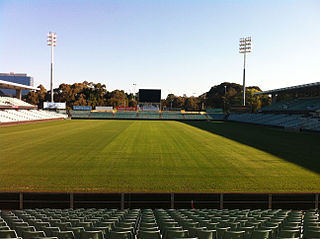 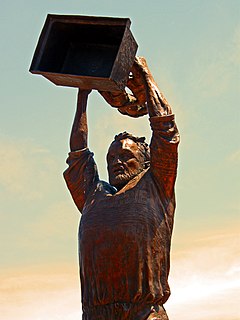 Raymond Allan Price OAM, is an Australian former dual-code international rugby union and rugby league footballer. He was nicknamed “Mr Perpetual Motion” for his hard, intimidating style of play in league at lock forward. Price played rugby league for Sydney's Parramatta Eels club, with whom he won four NSWRL premierships, a Dally M Medal and a Rothmans Medal. He also played in State of Origin for New South Wales.

Jack Gibson OAM was an Australian rugby league coach, player, and commentator. He is widely considered one of the greatest coaches in the sport's history. Nicknamed 'Supercoach', he was highly regarded not only for his coaching record but also for his thirst for innovation, as he introduced new coaching and training methods into the sport in the 1970s, and 1980s, when first-grade rugby league was then still played and coached on a semi-professional basis.

Brett "Bert" Edward Kenny is an Australian former professional rugby league footballer who played in the 1980s and 1990s. He was a centre and five-eighth for the Australian national team and New South Wales Blues representative sides, and the Parramatta Eels. He played in 17 Tests, made 17 State of Origin appearances and won 4 premierships with Parramatta. He is considered one of the nation's finest footballers of the 20th century.

Jarrod McCracken is a New Zealand former rugby league footballer who played in the 1990s and 2000s. He is a former captain of the New Zealand national rugby league team and is the son of New Zealand rugby league international, Ken McCracken. McCracken played club football in Australia, captaining both the Parramatta Eels and Wests Tigers during his career which ended with a spear tackle which he successfully sued for. During his time in the game, McCracken was regarded as one of the hardest running and most damaging centres in the world.

The 1981 New South Wales Rugby Football League premiership was the 74th season of Sydney's professional rugby league football competition, Australia's first. Twelve clubs, including six of 1908's foundation teams and another six from around Sydney competed for the J J Giltinan Shield and WD & HO Wills Cup during the season, which culminated in a grand final between the Parramatta and Newtown clubs. NSWRFL clubs also competed in the 1981 Tooth Cup and players from NSWRFL clubs were selected to represent the New South Wales team.

The 1982 NSWRFL season was the 75th season of professional rugby league football in Australia and saw the New South Wales Rugby Football League’s first expansion since 1967 with the introduction of the first two clubs from outside the Sydney area in over half a century: the Canberra Raiders and the Illawarra Steelers. Thus a total of 14 clubs competed for the J.J. Giltinan Shield and newly-created Winfield Cup during the season, which culminated in a grand final between the Parramatta and Manly-Warringah clubs. This season, NSWRFL teams also competed for the 1982 KB Cup which was won by Manly-Warringah.

The 1986 New South Wales Rugby League premiership was the seventy-ninth season of professional rugby league football in Australia. Thirteen clubs competed for the J J Giltinan Shield and Winfield Cup during the season, which culminated in a grand final between the Parramatta Eels and Canterbury-Bankstown Bulldogs which featured the introduction of the Clive Churchill Medal. This season, NSWRL teams also competed for the 1986 National Panasonic Cup.

The 1981 State of Origin game was the second such match between arch rivals Queensland and New South Wales to be played under State of Origin selection rules. Again it was played as the third game of an already-decided 3-game series. New South Wales' victories in the first two games under the "state of residency" selection rules were, however, the last matches of this kind to ever be played as the following year the Origin concept was fully embraced.

The 1983 State of Origin series was the second time the annual three-game series between the New South Wales and Queensland rugby league teams was played entirely under "state of origin" selection rules.

Justin Horo is a New Zealand professional rugby league footballer who last played as a second-row, lock and hooker for Wakefield Trinity in the Super League. He previously played for the Parramatta Eels and the Manly Warringah Sea Eagles in the NRL. The Skip of the SPC