Stuart William Copeland (born 19 January 1968) is an Australian politician. He was a National/Liberal National from 2001 to 2009, representing the district of Cunningham.

Copeland won preselection to contest the state seat of Cunningham for the National Party defeating the Mayor of the Jondaryan Shire Peter Taylor. Taylor went on to be elected Mayor of the Toowoomba Regional Council in 2008.

Copeland was elected at the February 2001 State election after a three cornered contest with the Liberal Party. [1] He was one of only 11 National Party MPs to form the official Opposition following Premier Peter Beattie's landslide win gaining 66 seats in the 89 seat Assembly. Ray Hopper MP, elected as an Independent for the seat of Darling Downs, joined the Nationals in December 2001. [2]

Copeland was appointed Shadow Minister for Families, Disabilities, Youth and The Arts, and went on to hold the portfolios of Education, Training, Multicultural Policy, Health, Open Government, Justice and Attorney General.

In 2007 Copeland was appointed Leader of Opposition Business. [3]

During Question Time on 22 March 2005, as Shadow Minister for Health, Copeland asked the then Minister for Health, Gordon Nuttall MP, a question on an internal Queensland Health investigation into allegations against the competence of Jayant Patel, a surgeon at Bundaberg Base Hospital. Soon after that morning's Question Time, the Member for Burnett, Rob Messenger MP, made a five-minute ‘Matters of Public Interest’ speech. The speech contained serious allegations against the clinical competence of a Dr Patel, an overseas trained surgeon working at the Bundaberg Base Hospital. [4]

The Doctor Death scandal and other problems within Queensland Health dominated Queensland politics for a significant period.

On Friday 8 July 2005, in a public hearing of a Queensland parliamentary estimates committee, 'Estimates Committee D - Health', Copeland questioned Health Minister Gordon Nuttall over his knowledge of the problems surrounding the proficiencies of Overseas Trained Doctors. At the time, the minister was accompanied by senior officers of Queensland Health, including the then Director General of Queensland Health (Dr Buckland) and the then Senior Executive Director, Health Services (Dr Scott).

Nuttall denied ever having been briefed on problems associated with Overseas Trained Doctors, but was directly contradicted by Dr Scott who advised the committee that Nuttall had been briefed. This led to accusations Nuttall had lied to the Committee, then an offence under Section 57 of the Queenslands Criminal Code.

In August 2005, Nuttall stepped aside from the Ministry while the Crime and Misconduct Commission (CMC) investigated claims he had given a false answer to a Parliamentary estimates committee regarding his prior knowledge of problems with overseas-trained doctors. The Commission reported back in December 2005, recommending the Attorney-General prosecute Nuttall under section 57 of the Criminal Code. The prosecution was not proceeded with as Premier Beattie recalled Parliament to revoke the relevant section of the Criminal Code so Parliament could deal with such matters itself under contempt of parliament provisions.

Nuttall resigned from the Ministry on 7 December 2005. [5] As a result of the Nuttall case, Lying to Parliament remains a powerful political issue in Queensland with the LNP promising during the 2012 election campaign to re-introduce laws to make it illegal to lie to Parliament. [6]

In the State electoral redistribution prior to the 2009 Queensland election, the electorate of Cunningham was abolished and divided between the existing electorates of Toowoomba South and Southern Downs and the new electorate of Condamine. [7]

Under the terms of the constitution of the newly formed LNP following the amalgamation of the National and Liberal Parties in Queensland, all sitting Members of Parliament, State and Federal, were automatically endorsed (or “grandfathered”) for their next election. In the case of a redistribution the LNP's constitution stated “If a redistribution changes the boundaries of a current State or Federal electorate, the sitting Member will be entitled to claim the electorate that contains 50.1% of the enrolments in the member’s old seat and contest it as the sole candidate of the Party for that seat at the next State or Federal election”. [8]

The majority of the new Condamine's voters came from Darling Downs, held by fellow LNP member Ray Hopper, who like Copeland was from the National side of the merger. Under LNP rules, Hopper was automatically preselected for Condamine, and Copeland was effectively barred from standing for the LNP in any seat containing part of the now-abolished Cunningham.

It had been reported that Mike Horan, the member for Toowoomba South, had intended to retire and hand his seat to Copeland. Horan was also from the National side of the merger. However, this did not eventuate and Copeland was left without a seat. [9]

Despite having previously been nominated by Lawrence Springborg as a potential leader, [10] Copeland announced he would be retiring and moved to the backbench.

At the beginning of the election campaign, Copeland resigned from the LNP and announced his intention to stand as an independent in Condamine. He pushed Labor into third place on the primary vote, but was soundly defeated by Hopper when all preferences were distributed.

Following his departure from Parliament, Copeland was employed by the University of Southern Queensland as the Principal Manager, Government and Community in USQ's Office of External Relations. [11]

In September 2009, the Bligh Government appointed Copeland to serve as a Director on the Board of Powerlink, a Government Owned Corporation. [12]

In 2011, Copeland was appointed as State Director of The Nationals in Victoria. [13]

Copeland is married to Rae McCaull, a former State Secretary of The Nationals in Queensland, and they have two children. 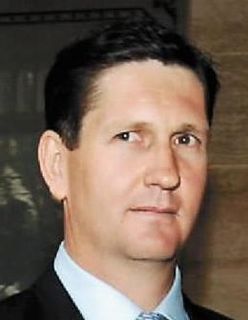 Toowoomba South is an electoral district of the Legislative Assembly in the Australian state of Queensland. It was created with the 1972 redistribution, and replaced the abolished Toowoomba East.

Cunningham was an electoral district of the Legislative Assembly in the Australian state of Queensland from 1888 to 2009.

Condamine is an electoral district of the Legislative Assembly in the Australian state of Queensland.

Raymond Gordon Hopper is a former Australian politician. He was a member of the Legislative Assembly of Queensland from 2001 to 2015. Originally elected as the member for Darling Downs as an independent in 2001, he joined the National Party later that year and the Liberal National Party in 2008. 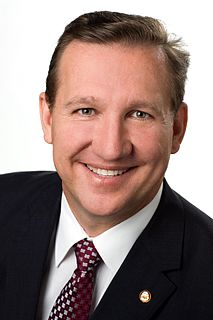 David Francis Gibson is a former Australian politician who served as the 18th member for Gympie in the Legislative Assembly of Queensland from 2006 to 2015. In January 2015 Mr Gibson retired from State politics. 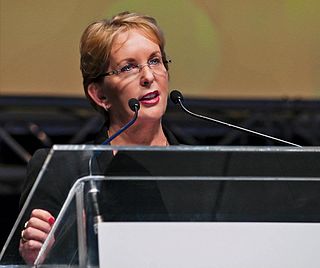 Rosslyn Mary Bates is an Australian politician. Bates has been a Liberal National Party member of the Parliament of Queensland since March 2009, representing the electorate of Mudgeeraba.

The electoral district of Aubigny was a Legislative Assembly electorate in the state of Queensland. It was first created in a redistribution ahead of the 1873 colonial election, and existed until the 1972 state election.

Katter's Australian Party (KAP) is a political party in Australia. It was founded by Bob Katter, the independent and former Nationals MP for the seat of Kennedy, with a registration application lodged to the Australian Electoral Commission in 2011.

Verity Mary Barton is an Australian politician. She was the LNP member of the Legislative Assembly of Queensland for Broadwater from 2012 to 2015. She defeated Peta-Kaye Croft at the 2012 state election and was re-elected at the 2015 election, before losing LNP preselection for the 2017 election to former MP David Crisafulli.

Robert Carl Ignatius Katter is an Australian politician. He serves as the member of the Legislative Assembly of Queensland for Traeger, having previously represented Mount Isa from 2012 to 2017. He is the leader of Katter's Australian Party, having taken over from his father, Bob Katter in February 2020.

Trevor John Watts is an Australian Liberal National politician who is the member of the Legislative Assembly of Queensland for Toowoomba North, having defeated Kerry Shine at the 2012 state election.

Glenn James Butcher is an Australian politician. He has been the Labor member for Gladstone in the Queensland Legislative Assembly since 2015. The seat had been held by retiring independent MP Liz Cunningham since 1995.

David Carl Janetzki is an Australian politician. He was elected to the Queensland Legislative Assembly representing the seat of Toowoomba South for the Liberal National Party at a Toowoomba South state by-election in July 2016. 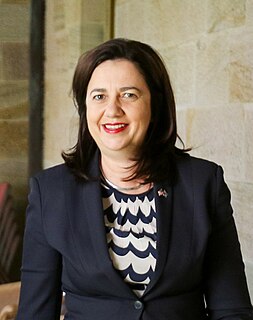 The 2020 Queensland state election is scheduled to be held on Saturday 31 October 2020 to elect the 57th Parliament of Queensland. All 93 seats in the Legislative Assembly of the unicameral parliament will be up for election.