Sustainable art is art in harmony with the key principles of sustainability, which include ecology, social justice, non-violence and grassroots democracy. [1]

Sustainable art may also be understood as art that is produced with consideration for the wider impact of the work and its reception in relationship to its environments (social, economic, biophysical, historical and cultural).

According to the contemporary art historians and curators Maja and Reuben Fowkes, the origins of sustainable art can be traced to the conceptual art of the late 1960s and early 1970s, with its stress on dematerialisation and questioning of the functioning of the art system. [2] They also connect the rise of the concept of sustainability to the ending of the Cold War in 1989 and the emergence of a new awareness of the global character of ecological and social problems. [3] Sustainable art adopts, according to these authors, a critical position towards some key practitioners in the land art movement of the 1960s, who showed little concern for the environmental consequences of treating the landscape like a giant canvas with a bulldozer for a brush. [4] They have questioned the polemical division between 'autonomous' and 'instrumental' art originating with modernism, arguing that it is 'autonomy that gives art, as well as artists as social actors, the potential to be free and able to offer alternatives to dominant ideological paradigms.' [5]

Since 2005 there is a Sustainable Arts Biennale running at Ihlienworth near Hamburg, Germany, curated by the German conceptional artist and curator Samuel J. Fleiner. There are a range of interpretations over the relations between art and sustainability, besides the term 'sustainable art' promoted by Maja and Reuben Fowkes: Other authors prefer the broader notions of 'sustainability arts' or 'art and sustainability' (e.g. Sacha Kagan and Volker Kirchberg. [6] Still others explicitly rejected the use of the term 'sustainable art', referring instead to 'artistic work that inspires us to think about sustainability" (Margot Käßmann). [7]

Professional discussion of the relationship of contemporary art to notions of sustainability blossomed across Europe in the early years 2000, with e.g. the conference of the German Society for Political Culture (Instituts für Kulturpolitik der Kulturpolitischen Gesellschaft e.V.), in January 2002 at the Art Academy of Berlin, and the 'Tutzinger Manifest'. [8] An International Symposium on Sustainability and Contemporary Art took place at Central European University, in Budapest (Hungary) in March 2006. This was the first in a series of international symposia organised by Maja and Reuben Fowkes bringing together contemporary artists, philosophers, environmental sciences and activists to explore common ground around issues such as 'Exit or Activism' (2008), 'Hard Realities and the New Materiality' (2009) and 'Art, Post-Fordism and Eco-Critique' (2010).. In March–April 2007 at the Leuphana University Lüneburg, the Arts Research Network of the European Sociological Association focused its attention on the recent movements and approaches to 'arts and sustainability' at its biennial conference. [9]

Key texts in the emerging field of sustainable art include 'Kultur - Kunst - Nachhaltigkeit' (2002) by Hildegard Kurt and Bernd Wagner, [10] ‘The Principles of Sustainability in Contemporary Art’ (2006) by Maja and Reuben Fowkes [11] and 'Art and Sustainability' (2011) by Sacha Kagan. [12] A collection of interdisciplinary analyses of the arts and cultures with relationship to sustainability is available in 'Sustainability: a new frontier for the arts and cultures' (2008) edited by Sacha Kagan and Volker Kirchberg. [13]

Exhibitions devoted explicitly to "sustainable art" include e.g. ‘Beyond Green: Towards a Sustainable Art’ at the Smart Museum in Chicago in November 2005. [14] For an analysis of the conflictual politics of sustainability and the ambiguity of the term sustainability (which oscillates between "ecological sustainability" and "economic sustainable development," see TJ Demos, “The Politics of Sustainability: Art and Ecology” (2009). [15] For a recent account of the multi-faceted role of contemporary art in highlighting environmental issues, expressing criticism towards unsustainable factors in society, and offering imaginative solutions for the achievement of sustainability, see Maja and Reuben Fowkes's essay on 'Art and Sustainability' in Enough for All Forever (2012). [16]

Modern sustainable artists include artists who are using non-toxic, sustainable materials in their art practices as well as integrating conceptual ideas of sustainability into their work.

The term public art refers to a specific art genre with its own professional and critical discourse. It represents art in any media whose form, function and meaning are created for the general public through a public process. Public art is visually and physically accessible to the public - it is installed or staged in public space or the public realm, usually outside. Public art embodies public or universal concepts rather than commercial, partisan or personal concepts or interests, and it has clear aesthetic qualities in form or theme. Notably, public art is also the direct or indirect product of a public process of creation, procurement, and/or maintenance. Environmental art is a range of artistic practices encompassing both historical approaches to nature in art and more recent ecological and politically motivated types of works. Environmental art has evolved away from formal concerns, worked out with earth as a sculptural material, towards a deeper relationship to systems, processes and phenomena in relationship to social concerns. Integrated social and ecological approaches developed as an ethical, restorative stance emerged in the 1990s. Over the past ten years environmental art has become a focal point of exhibitions around the world as the social and cultural aspects of climate change come to the forefront.

Nico Stehr was "Karl Mannheim Professor for Cultural Studies" at the Zeppelin University in Friedrichshafen / Germany and Founding Director of the European Center for Sustainability Research.

The University of Luxembourg is a public research university with an international, multilingual and interdisciplinary character, situated on Belval Campus and in Luxembourg City, Luxembourg.

Gregory A. Cajete is a Tewa author and professor from Santa Clara Pueblo, New Mexico. He has pioneered reconciling indigenous perspectives in sciences with a Western academic setting. His focus is teaching "culturally based science, with its emphasis on health and wellness."

Contemporary African art is commonly understood to be art made by artists in Africa and the African diaspora in the post-independence era. However, there are about as many understandings of contemporary African art as there are curators, scholars and artists working in that field. All three terms of this "wide-reaching non-category [sic]" are problematic in themselves: What exactly is "contemporary", what makes art "African", and when are we talking about art and not any other kind of creative expression? Western scholars and curators have made numerous attempts at defining contemporary African art in the 1990s and early 2000s and proposed a range of categories and genres. They triggered heated debates and controversies especially on the foundations of postcolonial critique. Recent trends indicate a far more relaxed engagement with definitions and identity ascriptions. The global presence and entanglement of Africa and its contemporary artists have become a widely acknowledged fact that still requires and provokes critical reflection, but finds itself beyond the pressure of self-justification.

Ecological art is an art genre and artistic practice that seeks to preserve, remediate and/or vitalize the life forms, resources and ecology of Earth, by applying the principles of ecosystems to living species and their habitats throughout the lithosphere, atmosphere, biosphere, and hydrosphere, including wilderness, rural, suburban and urban locations. It is a distinct genre from Environmental art in that it involves functional ecological systems-restoration, as well as socially engaged, activist, community-based interventions. Ecological art also addresses politics, culture, economics, ethics and aesthetics as they impact the conditions of ecosystems. Ecological art practitioners include artists, scientists, philosophers and activists who often collaborate on restoration, remediation and public awareness projects.

Susanne Tunn is a German sculptor. She is well known for her big sculptures made from stone, but works as well in other natural materials such as tin, wood, concrete, plants or dust. Whether she is working with outsize or tiny formats, they always emit a strong physical effect.

Gabriele Klein is a sociologist, dance theorist and professor at the University of Hamburg.

Marina Gržinić is a philosopher, theoretician and artist from Ljubljana. She is a prominent contemporary theoretical and critical figure in Slovenia. Since 1993 she is employed at the Institute of Philosophy at the Scientific and Research Center of the Slovenian Academy of Science and Arts. Today, she serves as a professor and research adviser. For her scientific work, she has received the Golden SASA sign in 2007. Since 2003, she has also served as Full Professor at the Academy of Fine Arts in Vienna, Austria. She publishes extensively, lectures worldwide, and is involved in video art since 1982.

Ecovention was a term invented by Amy Lipton and Sue Spaid in 1999 to refer to an ecological art intervention in environmental degradation. The Ecovention movement in art is associated with land art, earthworks, and environmental art, and landscape architecture, but remains its own distinct category. Many ecoventions bear tendencies similar to public works projects such as sewage and waste-water treatment plants, public gardens, landfills, mines, and sustainable building projects.

Aviva Rahmani is an Ecological artist whose public and ecological art projects have involved collaborative interdisciplinary community teams with scientists, planners, environmentalists and other artists. Her projects range from complete landscape restorations to museum venues that reference painting, sound and photography. 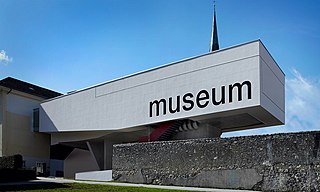 The Museum der Völker in the Austrian Schwaz in the county of Tyrol was founded in 1995 as a cultural association Haus der Völker by Gert Chesi and belongs to the well known Ethnology museums in Europe. After a new construction and remodeling the exhibition operation opened on the 12th of April 2013 as Museum der Völker. Translated the name means museum of the peoples or museum of the tribes.

The Institute for Contemporary Art is a transnational research centre focused on East European art and ecology and operates across the fields of art history, contemporary art and ecological thought. The institute collaborates with universities and art spaces both in Central Europe and across the continent.

Tina Sauerlaender is a Berlin-based independent curator and writer. She is the co-founder, director and head curator of peer to space, a platform and exhibition hub for curatorial projects founded in Munich, Germany in 2010.

The Belconnen Arts Centre, in the national capital Canberra, was opened in 2009, which aims to be the centre of arts and culture to celebrate, record meaningful journeys, share stories and make memories. The facility is owned by the ACT government and managed by Belconnen Arts Center Incorporated. The centre is operated by a small group of staff supported by numerous volunteers who work together to provide a wide range of activities to engage the community in Belconnen and other areas. The core concept of the Belconnen Art Center is to inspire love and participation in the arts, and link to the diverse population of Canberra through a variety of artistic practices, including dance, music, visual arts, drama and more. The Belconnen Art Center places inclusive community art and cultural development at the forefront and center to develop, share and celebrate creativity.