In mathematics, a tangle is generally one of two related concepts:

(A quite different use of 'tangle' appears in Graph minors X. Obstructions to tree-decomposition by N. Robertson and P. D. Seymour, Journal of Combinatorial Theory B 59 (1991) 153–190, who used it to describe separation in graphs. This usage has been extended to matroids.)

The balance of this article discusses Conway's sense of tangles; for the link theory sense, see that article.

Two n-tangles are considered equivalent if there is an ambient isotopy of one tangle to the other keeping the boundary of the 3-ball fixed. Tangle theory can be considered analogous to knot theory except instead of closed loops we use strings whose ends are nailed down. See also braid theory.

Without loss of generality, consider the marked points on the 3-ball boundary to lie on a great circle. The tangle can be arranged to be in general position with respect to the projection onto the flat disc bounded by the great circle. The projection then gives us a tangle diagram, where we make note of over and undercrossings as with knot diagrams.

A rational tangle is a 2-tangle that is homeomorphic to the trivial 2-tangle by a map of pairs consisting of the 3-ball and two arcs. The four endpoints of the arcs on the boundary circle of a tangle diagram are usually referred as NE, NW, SW, SE, with the symbols referring to the compass directions.

We can describe such a diagram by considering the numbers given by consecutive twists around the same set of endpoints, e.g. (2, 1, -3) means start with two horizontal arcs, then 2 twists using NE/SE endpoints, then 1 twist using SW/SE endpoints, and then 3 twists using NE/SE endpoints but twisting in the opposite direction from before. The list begins with 0 if you start with two vertical arcs. The diagram with two horizontal arcs is then (0), but we assign (0, 0) to the diagram with vertical arcs. A convention is needed to describe a "positive" or "negative" twist. Often, "rational tangle" refers to a list of numbers representing a simple diagram as described.

The fraction of a rational tangle

is then defined as the number given by the continued fraction

. Conway proved that the fraction is well-defined and completely determines the rational tangle up to tangle equivalence. [1] An accessible proof of this fact is given in:. [2] Conway also defined a fraction of an arbitrary tangle by using the Alexander polynomial.

There is an "arithmetic" of tangles with addition, multiplication, and reciprocal operations. An algebraic tangle is obtained from the addition and multiplication of rational tangles.

One motivation for Conway's study of tangles was to provide a notation for knots more systematic than the traditional enumeration found in tables.

Tangles have been shown to be useful in studying DNA topology. The action of a given enzyme can be analysed with the help of tangle theory. [3] 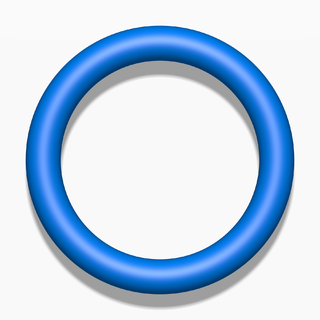 In mathematics, homology is a general way of associating a sequence of algebraic objects such as abelian groups or modules to other mathematical objects such as topological spaces. Homology groups were originally defined in algebraic topology. Similar constructions are available in a wide variety of other contexts, such as abstract algebra, groups, Lie algebras, Galois theory, and algebraic geometry. 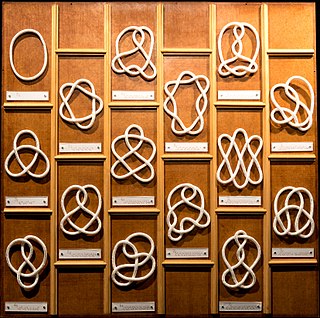 In topology, two continuous functions from one topological space to another are called homotopic if one can be "continuously deformed" into the other, such a deformation being called a homotopy between the two functions. A notable use of homotopy is the definition of homotopy groups and cohomotopy groups, important invariants in algebraic topology. 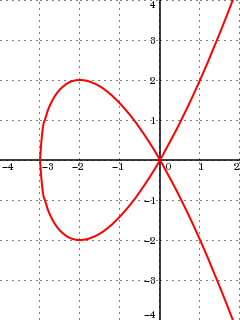 Skein relations are a mathematical tool used to study knots. A central question in the mathematical theory of knots is whether two knot diagrams represent the same knot. One way to answer the question is using knot polynomials, which are invariants of the knot. If two diagrams have different polynomials, they represent different knots. In general, the converse does not hold. 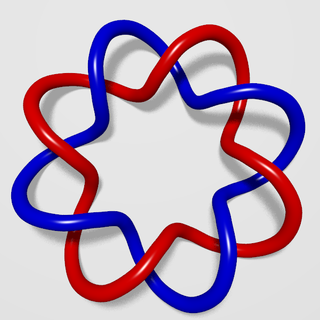 In knot theory, there are several competing notions of the quantity writhe, or Wr. In one sense, it is purely a property of an oriented link diagram and assumes integer values. In another sense, it is a quantity that describes the amount of "coiling" of a mathematical knot in three-dimensional space and assumes real numbers as values. In both cases, writhe is a geometric quantity, meaning that while deforming a curve in such a way that does not change its topology, one may still change its writhe.

In mathematics, the Kirby calculus in geometric topology, named after Robion Kirby, is a method for modifying framed links in the 3-sphere using a finite set of moves, the Kirby moves. Using four-dimensional Cerf theory, he proved that if M and N are 3-manifolds, resulting from Dehn surgery on framed links L and J respectively, then they are homeomorphic if and only if L and J are related by a sequence of Kirby moves. According to the Lickorish–Wallace theorem any closed orientable 3-manifold is obtained by such surgery on some link in the 3-sphere. 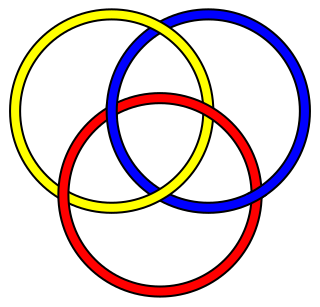 In the mathematical field of knot theory, a mutation is an operation on a knot that can produce different knots. Suppose K is a knot given in the form of a knot diagram. Consider a disc D in the projection plane of the diagram whose boundary circle intersects K exactly four times. We may suppose that the disc is geometrically round and the four points of intersection on its boundary with K are equally spaced. The part of the knot inside the disc is a tangle. There are two reflections that switch pairs of endpoints of the tangle. There is also a rotation that results from composition of the reflections. A mutation replaces the original tangle by a tangle given by any of these operations. The result will always be a knot and is called a mutant of K.

In knot theory, Conway notation, invented by John Horton Conway, is a way of describing knots that makes many of their properties clear. It composes a knot using certain operations on tangles to construct it.