Last updated February 26, 2019
Not to be confused with Team Specialized–lululemon.

Tanja Schmidt-Hennes is a former German professional cyclist. She was part of the 2007 Team Flexpoint and the 2008 Team Specialized Designs for Women. She retired in 2009.

Francis Mourey is a French professional cyclo-cross and road bicycle racer for UCI ProTeam Arkéa–Samsic. He won the Tro-Bro Léon in 2013, leading home an FDJ clean sweep of the podium as teammates Johan Le Bon and Anthony Geslin followed him across the finish line. In October 2015 Mouray announced that he would leave FDJ and join Bretagne–Séché Environnement for the 2016 season, reuniting him with former FDJ teammates Pierrick Fedrigo, Yauheni Hutarovich and Arnaud Gérard.

Team Flexpoint was a women's professional cycling team based in Netherlands and is title sponsored by Flexpoint. The team consists of two sections: UCI Women's Tour and the Cyclo-Cross. 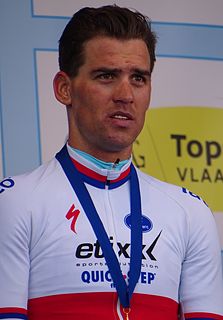 Zdeněk Štybar is a Czech professional cyclist, who currently rides for UCI WorldTeam Deceuninck–Quick-Step. While best known as a cyclo-cross racer, in 2011 Štybar began his professional road career while continuing to race cyclo-cross.

Emma Jane Pooley is an English sportswoman and presenter on the Global Cycling Network. A former professional cyclist who specialised in time trials and hilly races, she later transferred to endurance running, duathlon and triathlon, and is currently a professional triathlete and duathlete, and the reigning quadruple world champion in long distance duathlon.

Mitchelton–Scott is a women's professional cycling team based in Australia, sponsored by Orica for its first five years. Riders for Mitchelton–Scott compete in the UCI Women's World Tour and other elite women's events throughout the world.

Boels–Dolmans Pro Cycling is a professional cycling team based in the Netherlands, which competes in elite road bicycle racing events such as the UCI Women's World Tours. The title sponsors are the Dutch plant hire company Boels Rental and Dolmans Landscaping, a Dutch civil engineering company.

Thalita de Jong is a Dutch racing cyclist. She competed in the 2013 UCI women's team time trial in Florence. She won gold at the 2016 UCI Cyclo-cross World Championships in Zolder, Belgium. After five years with Rabo–Liv, in August 2016 Lares–Waowdeals announced that de Jong would join them for the 2017 season, leading the team on the road and in cyclo-cross. She is the older sister of fellow professional cyclist, Demi de Jong. De Jong's suffered a 2017 cyclocross season ending injury, falling at the Hoogerheide World Cup. Medical issues plagued her 2017 road season, by the end of the year, de Jong signed with the former Sport Vlaanderen–Guill D'or as it became an international team in 2018.

FDJ Nouvelle-Aquitaine Futuroscope is a professional Women's road bicycle racing team which is based in France. The team competes in various UCI Women's road races.

SAS–Macogep was a women's professional cycling team initially based in France and then later in Canada that competed in elite road bicycle racing.

Marcel Meisen is a German cyclo-cross cyclist, who currently rides for UCI Professional Continental team Corendon–Circus. He represented his nation in the men's elite event at the 2016 UCI Cyclo-cross World Championships in Heusden-Zolder.

Team Farm Frites–Hartol was a Dutch registered professional Women's cycling team which competed between 1999 and 2004.