The Apprentice: Martha Stewart is a reality game show and a spin-off from the series, The Apprentice , that ran in the fall of 2005. Broadcast on NBC, the show featured business tycoon Martha Stewart. Tasks were centered on Stewart's areas of expertise: media, culinary arts, entertaining, decorating, crafts, design, merchandising, and style. The tone of the show was somewhat muted compared to the original, as Stewart brought her own sensibilities to the elimination process, often simply saying goodbye, in contrast to original series host Donald Trump's catchphrase: "You're fired." She also wrote a cordial letter to the candidate who was fired; many times she took subtle jabs at the fired candidate and gave frank reasons for why the candidate did not succeed on the show. Several segments featuring Stewart were filmed at her home in Bedford, New York because at the time, she was serving the five-month house arrest portion of her ImClone scandal conviction. [1]

The two teams, Matchstick and Primarius, competed in 11 challenges. Overall, Primarius won eight, while Matchstick (candidates were reshuffled after Matchstick lost several times in a row) won only three.

The show's theme song is "Sweet Dreams (Are Made of This)" by Eurythmics. The logo is a businesswoman in a dress running with a bag instead of a businessman running with a briefcase. The background music is written by David Vanacore, Mark T, Williams, and Jeff Lippencott.

Despite the fairly big initial hype, ratings for this spin-off were relatively weak. This show averaged only 7 million viewers, and garnered a mediocre 2.5 average in the very important demographic of 18- to 49-year-old viewers. However, this program aired against very tough competition, including ABC's massive hit Lost . After the second episode, the show was moved from the 8 p.m. time slot to the 9 p.m. slot, and in spite of facing Lost, saw a slight increase in ratings.

There have been numerous rumors thrown out as to why the show failed, including: "too much" Martha Stewart (her Martha daytime program and this prime time program), confusion between this version and Trump's version which airs the day after (on Thursday nights), apathy over reality shows in general, NBC's declining fortunes, fatigue with the Apprentice franchise itself, and weak casting, although some felt the cast was superior to Apprentice 4, which ran concurrently. Trump blamed the Martha series for the declining ratings of his own version, even though the ratings for his show began to fall over a year before Martha's version premiered. Stewart responded in turn that she was supposed to have "fired" Trump in the premiere episode, making her a successor to Trump rather than the host of a spinoff. In mid-November 2005, NBC announced that it would not bring back the show for a second season, although the network and Stewart claimed that the show was initially planned as a one-season endeavor.

Within a few years of the end of the series, three of the top runners-up (Bethenny, Marcela, and Leslie) were participating in other television ventures, with second-place finisher Bethenny Frankel parlaying her fame from the inaugural cast The Real Housewives of New York City into further reality shows, television hosting, books, and a successful business, Skinnygirl Cocktails. Fourth-place finisher Ryan Danz appeared on the 21st season of The Amazing Race alongside his girlfriend Abbie Ginsberg. They finished in 5th place. [2] A third contestant, Shawn Killinger, would go on to be a popular on air host at QVC.

Week 1: Once Upon a Time and Dream

Week 6: Every Dog Has His Day

Week 7: Swimming Against the Tide

Week 12: The Interviews and the Ultimate Task

The first season of The Apprentice aired on NBC in the winter and spring of 2004. It featured 16 candidates.

The Apprentice 2 is the second season of The Apprentice, which began on September 9, 2004, on NBC. Although this season did not match the ratings of the first and dropped out of the Top 10 Nielsen, it still performed strongly overall, ranking No. 11 with an average of 16.14 million viewers.

The Apprentice 3 is the third season of The Apprentice. It premiered January 20, 2005 on NBC. This was the last season to land in the Top 20 Nielsen ratings, ranking at #15, with an average of 13.96 million viewers. The only season nominated for an Emmy Award.

The Apprentice 5 is the fifth season of The Apprentice, with Donald Trump as the executive producer and host. Applications were available online and filming occurred in the fall of 2005. Sean Yazbeck was named the winner and hired by Donald Trump as the new Apprentice during the season finale. Lee Bienstock, the runner-up to Yazbeck, proved to be very competitive and was hired outside of television a few months later.

The Apprentice: Los Angeles is the sixth installment of the US version of The Apprentice reality television show. It was confirmed on November 30, 2005. Like the other Apprentice seasons, Donald Trump is the executive producer and host in his quest to hire a sixth apprentice. In a departure from the previous five Apprentice seasons, this one was shot in Los Angeles, California. As with seasons two through five, this season featured 18 contestants. Ivanka Trump made her debut as a full-time boardroom judge this season. Donald Trump Jr. also made his debut as a full-time judge this season. 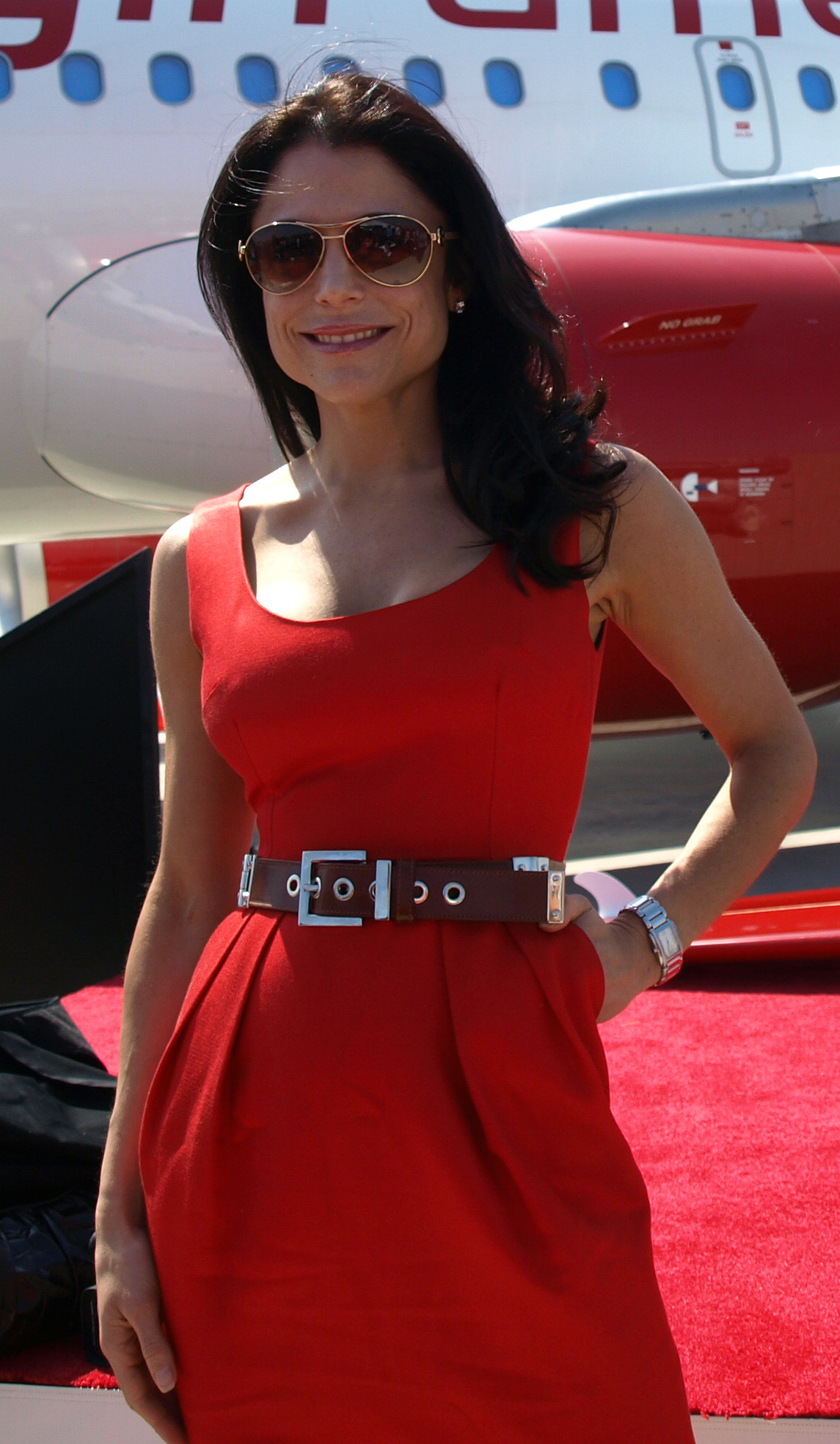 Bethenny Frankel is an American businesswoman, television personality, entrepreneur, philanthropist, and author. She starred in the Bravo television series The Real Housewives of New York City, having appeared in eight of its thirteen seasons since its 2008 premiere. Prior to this, she was the runner-up on the NBC reality competition series The Apprentice: Martha Stewart in 2005. She has gone on to headline several series of her own: the Bravo spin-offs Bethenny Ever After (2010–2012) and Bethenny & Fredrik (2018), the FOX daytime talk show Bethenny (2013–2014), and the HBO Max reality competition series The Big Shot with Bethenny (2021).

The Celebrity Apprentice is the seventh installment of the reality game show The Apprentice, and the first of The Celebrity Apprentice. This season features celebrity candidates vying for the title of Donald Trump's, "Best Business Brain," as a way to revitalize the series, with the winner donating their proceeds to charity. This installment marked the series' return to New York after spending the previous season in Los Angeles and features abstract paintings by Seattle-based artist Maeve Harris. The series premiered on NBC on January 3, 2008 at 9:00PM.

The Apprentice 4 is the fourth season of The Apprentice, with Donald Trump as the executive producer and host. The show was aired on Thursday nights at 9 p.m. on NBC and started September 22, 2005.

The Apprentice 10 is the tenth and final original format installment of the United States version of international franchise and reality game series The Apprentice. For this particular season, the show departed from The Celebrity Apprentice and returned to its precursor, featuring unknowns as apprentices instead of celebrities. Not since season six, during the 2006–07 television season, did the show use this format. The theme of the season is "second chance" and the contestants are those affected by the Great Recession.

The Celebrity Apprentice 4 is the eleventh installment of the reality game show Celebrity Apprentice, which premiered March 6, 2011. Country music star John Rich was named the winner defeating actress Marlee Matlin. Lil Jon, La Toya Jackson, Gary Busey, and Lisa Rinna all returned for All-Star Celebrity Apprentice. Jackson and Busey placed twelfth and sixth, respectively, and both won $20,000 for their charities while Lil Jon and Rinna were both semifinalists placing third and fourth, respectively; Jon raised $160,000 and Rinna raised $504,500 resulting in her improving immensely from her first season.

The Celebrity Apprentice 5 is the fifth installment of the reality game show The Celebrity Apprentice. On May 15, 2011, NBC announced that the show would be returning for a fifth season in 2012. The following day, at NBC's annual upfront presentations to advertisers, Donald Trump confirmed that he would be hosting the fifth season. On January 4, 2012, Trump officially announced the cast on Today and NBC issued a press release with more details. On January 13, 2012, NBC announced the fifth season would premiere February 19, 2012, and would be the first season to air each week's finale live. The network announced that it would air a one-hour version of the previous week's episode prior to the airing of new episodes on February 26 and March 4 at 8 p.m.

The Celebrity Apprentice Australia is a celebrity version of The Apprentice Australia series. It began to air on the Nine Network on 24 October 2011, with the founder and chairman of Wizard Home Loans, Mark Bouris, returning as the chief executive officer. Brad Seymore and Deborah Thomas acted as boardroom advisors. The series is narrated by Andrew Daddo. Comedian Julia Morris was the inaugural celebrity winner, defeating choreographer and So You Think You Can Dance Australia judge Jason Coleman in the final boardroom.

The second season of The Celebrity Apprentice Australia began airing on 18 April 2012 on the Nine Network. The series was commissioned in late 2011 following the popularity of the first celebrity season, and will be the third edition of The Apprentice Australia overall. The official cast was announced in January 2012, with filming beginning on 15 January 2012. Mark Bouris returned as CEO, with his son Dane replacing Brad Seymour as boardroom advisor, alongside Deborah Thomas. TV personality Ian "Dicko" Dickson was the celebrity winner, defeating reality star Nathan Jolliffe in the final boardroom.

The third season of The Celebrity Apprentice Australia began airing on 30 April 2013 on the Nine Network. The series was announced following the conclusion of the second season in 2012. Mark Bouris returned as CEO, his boardroom advisors were again Dane Bouris and Deborah Thomas. The official cast was announced on the Celebrity Apprentice Australia Facebook page on 30 January 2013. Olympic swimmer Stephanie Rice was the winner this season, beating out Olympic sprinter John Steffenson, Socialite Roxy Jacenko, and retired boxer Jeff Fenech.

Celebrity Apprentice Ireland is an Irish reality television series, in which a group of Irish celebrities compete for the chance to win €25,000 for their chosen charity.

The Apprentice: ONE Championship Edition is a reality television program that premiered in Asia on 18 March 2021 and concluded on 10 June 2021. On 3 December 2021, the show won two major categories at the 2021 Asian Academy Creative Awards for Best Non-Scripted Entertainment and Best Adaptation of an Existing Format. It began broadcasting worldwide in June 2021. Although the series was filmed in Asia, it has no relation to The Apprentice Asia, and it is the first-ever global edition of The Apprentice co-owned by MGM and ONE Championship. On 1 February 2022, it became the first version of the franchise to stream on Netflix in over 150 countries.