The Big Cartoon DataBase (or BCDB for short) is an online database of information about animated cartoons, animated feature films, animated television shows, and cartoon shorts.

The BCDB project began in 1996 as a list of Disney animated features on creator Dave Koch's local computer. [1] In response to increasing interest in the material, the database went online in 1998 as a searchable resource dedicated to compiling information about cartoons, including production details such as voice actors, producers, and directors, as well as plot summaries and user reviews of cartoons. [2] In 2003, BCDB became a 501(c) non-profit corporation. [1] On June 24, 2009, it was announced by creator Dave Koch on his BCDB forums that the site had 100,000 titles. [3]

One feature of the BCDB is its "Top Rated" page which provides a listing of the top 25 animated films as voted by the registered users of the website. Ratings are shown based on top score as well as the cartoons that receive the highest number of votes. Users are given the option of rating a movie from "1" (lowest) to "10" (highest). To safeguard against attempts to skew the data, the DataBase employs data filters and a vote quota in an attempt to give an accurate Bayesian estimate. The BCDB also has a lowest-20 rated cartoons feature which, based on the same data, shows the least liked cartoons in the database. [4]

BCDB also includes a linked, online forum, where users express their opinions about cartoons, and/or ask questions about them. The forum is available to all registered users, and is actively moderated by a team of moderators and administrators.

Other features include news items related to the animation industry and the recently added image gallery, which allows users to see images of various cartoon characters taken from popular films.

In 2002, The San Diego Union Tribune listed BCDB as a "top site" and wrote "with more than 42,000 cartoons, 2,000 series[,] and 1,300 cartoon reviews, this may be one of the Internet's largest searchable databases of cartoons". [5] In 2005, Apple Hot News wrote "The Big Cartoon Database is the place to find in depth information about any cartoon ever made". [6] In 2006, it was reported by the Reference and User Services Association, in their Eighth Annual List of Best Free Reference Web Sites, that "The Big Cartoon Database is the definitive Web compendium for anyone interested in the history of animation." [2]

The Weekenders is an American animated television series created by Doug Langdale. It centers on the weekend life of four 12-year-old 7th graders: Tino, Lor, Carver, and Tish. The series initially aired on ABC and UPN, but was later moved to Toon Disney.

The Buzz on Maggie is an American-Canadian animated television series created by Dave Polsky for Disney Channel. The series centers on an ambitious and expressive tween fly named Maggie Pesky and her family and friends. The show is set in Stickyfeet, a city for insects located in a junkyard. While conceptualizing the series, Polsky wanted it to contain a playful aspect at adolescence and director Dave Wasson formed the overall look of the characters, being heavily influenced by early Walt Disney cartoon shorts. The Buzz on Maggie was Disney's first series to be fully animated in Adobe Flash, a process done by Bardel Entertainment and Future Thought Productions.

The Simpsons: Cartoon Studio is a computer program based on the animated television series The Simpsons that was released for PC and Mac computers in 1996 by Fox Interactive. It allows users to create their own Simpsons cartoons, using characters, sounds, music, and locations from the show. The cast members of The Simpsons provided their voices for the program. The Simpsons Cartoon Studio has received generally positive reviews, although there has been some criticism too.

The Illuminated Film Company is a British animation company founded in 1993 by Iain Harvey. 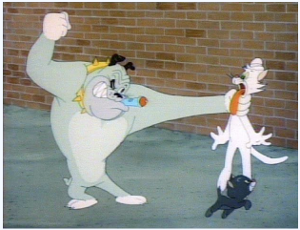 This is a list of events related to film and television animation of 1940.

The year 1979 in animation involved some events.

The year 1972 in animation involved some events.