The Bulldog Breed is a 1960 British comedy film starring Norman Wisdom and directed by Robert Asher. [1]

Norman Puckle (Norman Wisdom), a well-meaning but clumsy grocer's assistant, cannot seem to do anything right. After being rejected by Marlene, the love of his life, he attempts suicide, but cannot even do that. He is saved from jumping off a cliff at "Lover's Leap" by a Royal Navy petty officer. He persuades Puckle to join the Royal Navy, where he will meet "lots of girls".

Life in the Navy proves not to be as rosy as described, and Puckle fails at every task during basic training. But despite this, he is regarded by the Admiral in charge of a rocket project to be a "typical average British sailor", and chosen to be the first man to fly into outer space in an experimental rocket.

Puckle fails at every stage of his training and is court-martialled, but successfully pleads for a final chance to prove himself. By accident, he takes the place of an astronaut and leaves Earth in the rocket. Equally by accident, he manages to return. He crash-lands on a Pacific island and ends up in the arms of a compliant local maiden.

The film features early appearances by future British film stars Michael Caine and Oliver Reed who share a scene together with Wisdom. It takes place in a cinema lobby, where Norman gets into a fight with a gang of Teddy Boys (one of which is played by Reed), only to be helped by some sailors, who include Caine.

The film was made with co-operation from the Royal Navy, and features several of the Type 14 Blackwood-class frigates. An early scene shows a flotilla of these small frigates sailing out of Portland harbour, led by HMS Murray (F91).

Variety wrote, "the film stands or falls by Wisdom and though the actor, as always, seems to be trying rather too hard, his general good humor and energy carry him through the various situations entertainingly...Wisdom is surrounded by some very capable performers, notably Ian Hunter as the pompous admiral and Edward Chapman as an even more pompous character." [2] 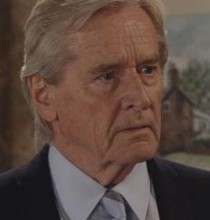 Kenneth "Ken" Barlow is a fictional character from the British ITV soap opera Coronation Street, played by William Roache. Barlow was created by Tony Warren as one of Coronation Street's original characters, and December 2020 marked Ken's 60th anniversary onscreen. He debuted in the soap's first episode on 9 December 1960. Having appeared in the role continuously since that date, Roache is the longest-serving actor in a televised soap opera, and was honoured at the 2010 Guinness World Records ceremony for the achievement, having surpassed actor Don Hastings from the American soap opera As the World Turns, who previously held this title. Roache stated in 2010 that he had no plans to leave the role and would remain in Coronation Street for as long as the producers would have him. 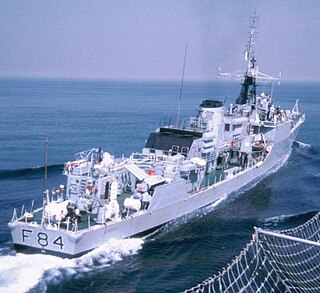 The Type 14 Blackwood class were a ship class of minimal "second-rate" anti-submarine warfare frigates. Built for the Royal Navy during the 1950s at a time of increasing threat from the Soviet Union's submarine fleet, they served until the late 1970s. Twelve ships of this class served with the Royal Navy and a further three were built for the Indian Navy.

The Bedford Incident is a 1965 British-American Cold War film starring Richard Widmark and Sidney Poitier and co-produced by Widmark. The cast also features Eric Portman, James MacArthur, Martin Balsam and Wally Cox, as well as early appearances by Donald Sutherland and Ed Bishop. The screenplay by James Poe is based on the 1963 book by Mark Rascovich, which borrowed from the plot of Herman Melville's Moby-Dick; at one point in the film, the captain is advised he is "not chasing whales now". 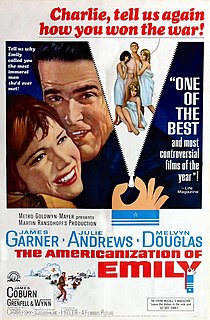 The Americanization of Emily is a 1964 American black-and-white romantic dark comedy-drama war film written by Paddy Chayefsky, produced by Martin Ransohoff, directed by Arthur Hiller and starring James Garner, Julie Andrews, Melvyn Douglas and James Coburn. The film also features Joyce Grenfell, Keenan Wynn and William Windom. Chayefsky's screenplay was loosely adapted from the 1959 novel of the same name by William Bradford Huie, who had been a SeaBee officer during the Normandy Invasion. The film is set in London during World War II in the weeks leading up to D-Day in 1944.

The Imperial Russian Navy was the navy of the Russian Empire from 1696 to 1917. It was formally established in 1696 and lasted until being dissolved during the February Revolution of 1917. It developed from a smaller force that had existed prior to Tsar Peter the Great's founding of the modern Russian Navy during the Second Azov campaign. It was expanded in the second half of the 18th century and reached its peak strength by the early part of the 19th century, behind only the British and French fleets in terms of size.

HMS Murray (F91) was one of a dozen Blackwood-class frigate of second-rate anti-submarine frigates built for the Royal Navy in the 1950s. She was named for George Murray, who served during the late 18th and early 19th centuries. 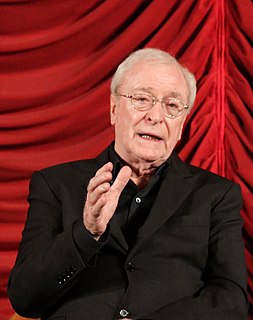 Michael Caine is an English actor who has appeared in over 130 films and has had multiple television appearances. Caine's acting career began in the 1950s, when he was cast in many small, often uncredited roles in British films. Caine gained recognition as one of the most famous actors of the 1960s through his breakthrough role in the film Zulu (1964). He then portrayed spy Harry Palmer in the films The Ipcress File (1965), Funeral in Berlin (1966) and Billion Dollar Brain (1967). He also had starring roles in The Italian Job and Battle of Britain. His role in Sleuth (1972) led him to an Academy Award for Best Actor nomination. Caine has won a Best Supporting Actor Oscar for the films Hannah and Her Sisters (1986) and The Cider House Rules (1999). More recently, Caine has gained a new following through his collaborations with British-American filmmaker Christopher Nolan in the Dark Knight Trilogy films, as well as Inception (2010) and Interstellar (2014).

We Joined the Navy is a 1962 British comedy film directed by Wendy Toye and starring Kenneth More, Lloyd Nolan, Joan O'Brien, Derek Fowlds, Graham Crowden, Esma Cannon and John Le Mesurier. Produced by Daniel M. Angel, it was based on the novel of the same name by John Winton a former Royal Navy lieutenant commander.

Sailor Beware! is a 1956 British romantic comedy film directed by Gordon Parry. It was released as Panic in the Parlor in the United States. 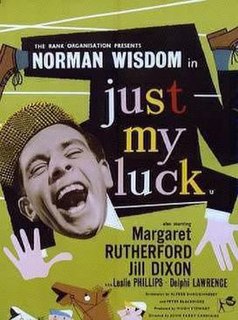 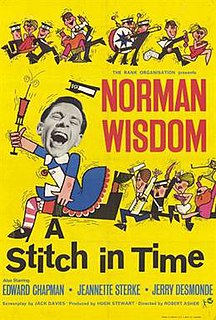 William Patrick Roache is an English actor. He is best known for playing Ken Barlow on the long-running soap opera Coronation Street since it was first broadcast on 9 December 1960. He is listed in the Guinness World Records as the longest-serving male television star in a continuous role.