The Carpentered Hen and Other Tame Creatures

The Carpentered Hen is the first poetry collection and first published book by John Updike, published by Harper in 1958.

Updike remarked in an interview collected by the Poetry Foundation that "I began as a writer of light verse, and have tried to carry over into my serious or lyric verse something of the strictness and liveliness of the lesser form." [1] The poet Thomas M. Disch noted that because Updike was such a well-known novelist, his poetry "could be mistaken as a hobby or a foible"; Disch saw Updike's light verse instead as a poetry of "epigrammatical lucidity." [2] His poetry has been praised for its engagement with "a variety of forms and topics," its "wit and precision," and for its depiction of topics familiar to American readers. [1]

"Why the Telephone Wires Dip..."

The collection's seventh poem, "Why the Telephone Wires Dip and the Poles Are Cracked and Crooked," is carved in full on the reverse side of the writer's gravestone.

"The old men say young men in gray hung this thread across our plains acres and acres ago. But we, the enlightened, know in point of fact it's what remains of the flight of a marvellous crow no one saw: Each pole, a caw."

This volume and its follow-up, Telephone Poles , was republished in a single-volume edition titled Verses. Several of the pieces in both were again reprinted in the author's collected edition, Collected Poems, published by Knopf in 1993. 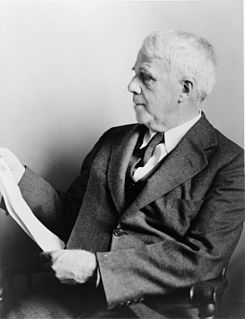 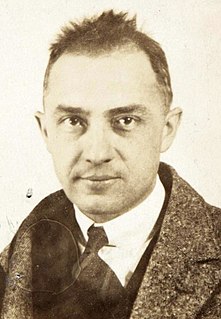 Thomas Michael Disch was an American science fiction author and poet. He won the Hugo Award for Best Related Book – previously called "Best Non-Fiction Book" – in 1999, and he had two other Hugo nominations and nine Nebula Award nominations to his credit, plus one win of the John W. Campbell Memorial Award, a Rhysling Award, and two Seiun Awards, among others.

Robert Elwood Bly is an American poet, essayist, activist and leader of the mythopoetic men's movement. His best-known prose book is Iron John: A Book About Men (1990), which spent 62 weeks on The New York Times Best Seller list, and is a key text of the mythopoetic men's movement. He won the 1968 National Book Award for Poetry for his book The Light Around the Body. 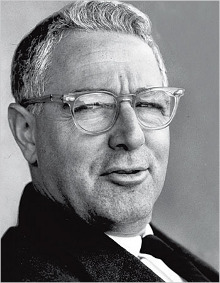 Thomson William "Thom" Gunn, was an English poet who was praised for his early verses in England, where he was associated with The Movement, and his later poetry in America, even after moving towards a looser, free-verse style. After relocating from England to San Francisco, Gunn wrote about gay-related topics—particularly in his most famous work, The Man With Night Sweats in 1992—as well as drug use, sex and his bohemian lifestyle. He won major literary awards; his best poems were said to have a compact philosophical elegance.

David Lehman is an American poet, non-fiction writer, and literary critic, and the founder and series editor for The Best American Poetry. He was a writer and freelance journalist for fifteen years, writing for such publications as Newsweek, The Wall Street Journal, and The New York Times. In 2006, Lehman served as Editor for the new Oxford Book of American Poetry. He taught and was the Poetry Coordinator at The New School in New York City until May 2018. 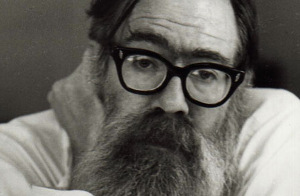 New Formalism is a literary movement in late 20th- and 21st-century American poetry that promotes a return to rhymed, metrical, and narrative poetry. New Formalism and the New Narrative are far the most controversial responses within American poetry to the dominant position of free verse and confessional poetry. 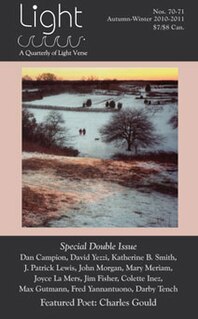 Light is an online journal which bills itself as "America's oldest and best-known journal of light verse."

Robert Arthur Wallace was an American poet. He was born in Springfield, Missouri on January 10, 1932, as the only child of Tincy Stough Wallace and Roy Franklin Wallace. He died April 9, 1999, in Cleveland, Ohio. Wallace was buried at the Lakeview Cemetery there. He served two years in the U.S. Army and was discharged as a private first class.