The Era was a British weekly paper, published from 1838 to 1939. Originally a general newspaper, it became noted for its sports coverage, and later for its theatrical content.

The Era was established in 1838 by a body of shareholders consisting of licensed victuallers and other people connected with their trade. The journal was intended to be a weekly organ of the public-house interest, just as the Morning Advertiser was then its daily organ. In the first two or three years of its existence, its political stance was broadly Liberal. Its first editor, Leitch Ritchie, proved too liberal for his board of directors, and in addition to editorial clashes, the paper was a commercial failure. Ritchie was succeeded by Frederick Ledger, who became sole proprietor as well as editor. He edited the paper for more than thirty years, gradually changing its politics from Liberalism to moderate Conservatism. Politics, however, ceased to be a major concern of The Era. Its great features after it came into the hands of Ledger were sport, freemasonry and the theatre. A contemporary observer remarked, "To the latter subject it has always devoted a very large part of its space. In relation indeed to the amount and accuracy of its theatrical intelligence, it far surpasses every other weekly journal." [1]

In an 1856 advertisement, The Era claimed to be the "largest Newspaper in the World, containing Sixty-four Columns of closely-printed matter in small type. It is the only Weekly Newspaper combining all the advantages of a first-rate Sporting Journal, with those of a Family Newspaper. Literature and the Metropolitan and Provincial Drama has more space allotted to them in the Era than in any other Journal. The Operatic and Musical Intelligence, Home and Continental, is always most copious and interesting." The Era became regarded as "Invaluable for reviews, news, and general theatrical information and gossip. Also of value are the assorted advertisements by and for actors and companies" [1]

The theatrical historian W. J. MacQueen-Pope described The Era as "The Actor's Bible", with the theatrical coverage gradually assuming prominence over all else:

By degrees and largely because of increasing advertisements, The Era began to take more and more interest in theatrical affairs and gave weekly reports of theatrical happenings in London and the great provincial cities.... [A]s Music Hall grew so the space devoted to it grew; The Era became the great theatrical journal and every member of the profession, stage or hall, just had to buy it although the price was steep, it remained at 6d. for many years. However, to be seen walking along the street with The Era under the arm, its title displayed for the passer-by to read, proved to all that the person carrying it was a "Pro". [2]

The Era was the longest running theatrical trade paper [3] and continued to publish until the beginning of World War II, although its popularity and importance had long since declined. [2] 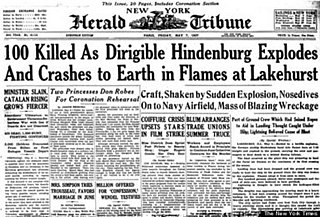 The Daily Sport was a tabloid newspaper published in the United Kingdom by Daily Sport Ltd., which specialised in celebrity news and softcore pornographic stories and images. The daily paper was launched in 1991 by David Sullivan, following its former Sunday sister title, Sunday Sport. It ceased publication and entered administration on 1 April 2011. 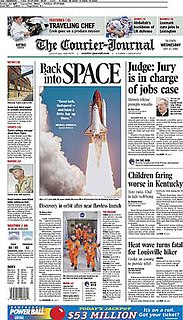 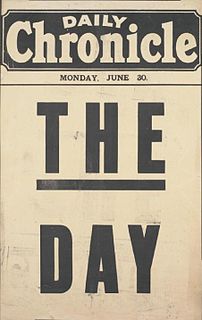 The Daily Chronicle was a British newspaper that was published from 1872 to 1930 when it merged with the Daily News to become the News Chronicle. 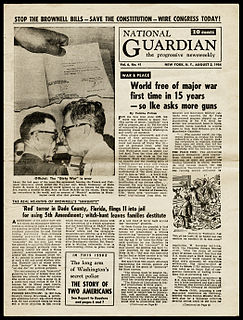 The National Guardian, later known as The Guardian, was a radical leftist independent weekly newspaper established in 1948 in New York City. The paper was founded by James Aronson, Cedric Belfrage and John T. McManus in connection with the 1948 Presidential campaign of Henry A. Wallace under the Progressive Party banner. Although independent of any political party, the National Guardian was initially close to the ideological orbit of the pro-Moscow Communist Party USA.

The Badger Herald is a newspaper serving the University of Wisconsin–Madison community, founded in 1969. The paper is published Monday through Friday during the academic year and once during the summer. Available at newsstands across campus and downtown Madison, Wisconsin and published on the web, it has a print circulation of 6,000.

The Student Life is a student newspaper covering the Claremont Colleges (5Cs), a consortium of liberal arts colleges in Claremont, California. It is published weekly each Friday during the academic year, typically spans roughly ten pages per issue, and is primarily funded by the student governments of the colleges.

The Sun News-Pictorial was a morning daily tabloid newspaper published in Melbourne, Victoria, from 1922 until its merger in 1990 with The Herald to form the Herald Sun.

The history of American newspapers begins in the early 18th century with the publication of the first colonial newspapers. American newspapers began as modest affairs—a sideline for printers. They became a political force in the campaign for American independence. Following independence the first amendment to U.S. Constitution guaranteed freedom of the press. The U.S. Postal Service Act of 1792 provided substantial subsidies: Newspapers were delivered up to 100 miles for a penny and beyond for 1.5 cents, when first class postage ranged from six cents to a quarter.

Japanese newspapers, similar to their worldwide counterparts, run the gamut from general news-oriented papers to special interest newspapers devoted to economics, sports, literature, industry, and trade. Newspapers are circulated either nationally, by region, by each prefecture, or by each city. Some newspapers publish as often as two times a day while others publish weekly, monthly, quarterly, or even yearly. The five leading national daily newspapers in Japan are the Asahi Shimbun, Mainichi Shimbun, the Yomiuri Shimbun, Sankei Shimbun and the Nikkei Shimbun. The first two are generally considered liberal/left leaning while the latter three are considered conservative/right leaning. The most popular national daily English-language newspaper in Japan is The Japan Times. 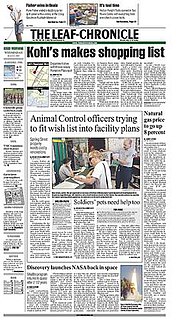 The Leaf-Chronicle is a newspaper in the state of Tennessee, founded, officially, in 1808. 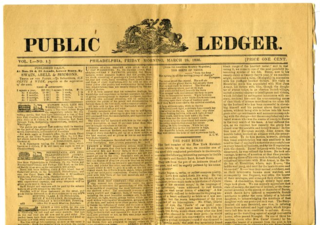 The Public Ledger was a daily newspaper in Philadelphia, Pennsylvania, published from March 25, 1836 to January 1942. Its motto was "Virtue Liberty and Independence". For a time, it was Philadelphia's most popular newspaper, but circulation declined in the mid-1930s. It also operated a syndicate, the Ledger Syndicate, from 1915 until 1946. 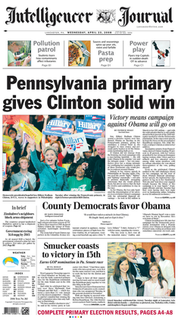 The 19th-century Catholic periodical literature is unique in many respects. Most of the periodical publications in mainly Catholic countries can be regarded as "Catholic" literature up to a few decades before 1800: the editorial line is implicitly Catholic in most instances.

The Legal Intelligencer is the oldest daily law journal published in the United States, and serves the legal community of Philadelphia and surrounding areas. The paper was founded in 1843 by Philadelphia attorney Henry E. Wallace.

The Sunday Mercury (1839–1896) was a weekly Sunday newspaper published in New York City that grew to become the highest-circulation weekly newspaper in the United States at its peak. It was known for publishing and popularizing the work of many notable 19th-century writers, including Charles Farrar Browne and Robert Henry Newell, and was the first Eastern paper to publish Mark Twain. It was also the first newspaper to provide regular coverage of baseball, and was popular for the extensive war correspondence from soldiers it published during the Civil War.

The Chicago Maroon, the independent student newspaper of the University of Chicago, is a weekly publication founded in 1892. During autumn, winter, and spring quarters of the academic year, the Maroon publishes every Wednesday. The paper consists of five sections: news, opinion ("Viewpoints"), arts, sports, and Grey City. In the late summer, it publishes its annual orientation Issue (O-Issue) for entering first-year students, including sections on the University and the city of Chicago.

There were five important periods in the history of Canadian newspapers' responsible for the eventual development of the modern newspaper. These are the "Transplant Period" from 1750–1800, when printing and newspapers initially came to Canada as publications of government news and proclamations; followed by the "Partisan Period from 1800–1850," when individual printers and editors played a growing role in politics. The "Nation Building Period from 1850–1900," when Canadian editors began the work of establishing a common nationalistic view of Canadian society. The "Modern period" from 1900 to 1980s saw the professionalization of the industry and the growth of chains. "Current history" since the 1990s saw outside interests take over the chains, as they faced new competition from the Internet.

The Farmer's Sun was a progressive weekly periodical published in Ontario from 1892 until 1934. It was, at various times, the official organ of several successive political movements: the Patrons of Industry, the Farmers Association of Ontario, and the United Farmers of Ontario, and supporting the idea of a progressive farmers' political party.