Last updated November 30, 2019
For the Australian newspaper once known by the same name, see The Australasian Chronicle.

The Morning Chronicle and London Advertiser was founded in 1769 by William Woodfall as publisher, editor, and reporter. [2] [6] [7] [8] [9] From 1769 to 1789 the editor was William Woodfall. (In 1789 he sold his interest in the Morning Chronicle and in the same year founded The Diary, or Woodfall's Register, which was the first to fully report on proceedings in Parliament as a regular feature. Since note-taking was prohibited, he worked from memory, at least to the extent of writing notes outside the chamber.) [10] [11] Woodfall's journalism slanted toward the Whig party in the House of Commons.

Newspapers of the time were subject to persecution by the government, and in typical fashion Woodfall was convicted of libel and spent a year in Newgate prison in 1779; a similar fate also befell some of his successors.

The Chronicle was bought by James Perry in 1789, bringing the journal firmly down on the Whig side against the Tory-owned London Gazette . Circulation increased, and by 1810, the typical sale was 7,000 copies. The content often came from journalists labelled as radicals, a dangerous connotation in the aftermath of the French Revolution. William Hazlitt joined to report on Parliament in 1813, by which time several charges of libel and seditious libel had been levelled against the newspaper and its contributors at one time or another, Perry being sentenced to three months in gaol in 1798. Woodfall died in 1803.

Perry was succeeded by John Black, probably in 1817 when Perry developed a severe illness. It was Black who later employed Dickens, Mayhew, and John Stuart Mill. William Innel(l) Clement (the owner of several titles) purchased the Morning Chronicle on the death of James Perry in 1821 for £42,000, raising most of the purchase money by bills. The transaction involved him with Messrs. Hurst & Robinson, the publishers, and their bankruptcy in 1825 hit him very hard. After losing annually on the Morning Chronicle, Clement sold it to John Easthope in 1834 for £16,500.

Charles Dickens began reporting for the Chronicle in 1834. It was in this medium that he also began publishing short stories under the pseudonym "Boz".

The articles by Henry Mayhew were published in 1849, accompanied by similar articles about other regions of the country, written by other journalists. 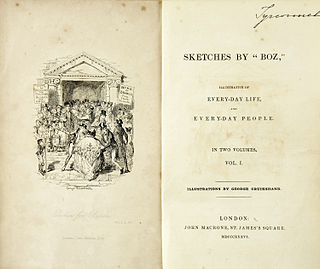 Henry Sampson Woodfall was an English printer and journalist. He was born and lived in London.

Edmund Hodgson Yates was a British journalist, novelist and dramatist.

London Labour and the London Poor is a work of Victorian journalism by Henry Mayhew. In the 1840s he observed, documented, and described the state of working people in London for a series of articles in a newspaper, the Morning Chronicle, that were later compiled into book form.

The Kingston Whig-Standard is a newspaper in Kingston, Ontario, Canada. It is published five days a week, from Tuesday to Saturday. It publishes a mix of community, national and international news and is currently owned by Postmedia. It has ISSN 1197-4397.

Letters of Junius is a collection of private and open letters critical of the government of King George III from an anonymous polemicist (Junius) later proven to be Philip Francis, as well as other letters in-reply from people to whom Junius had written between 1769 and 1772. The collection was published in two volumes in 1772 by Henry Sampson Woodfall, the owner and editor of a London newspaper, the Public Advertiser. 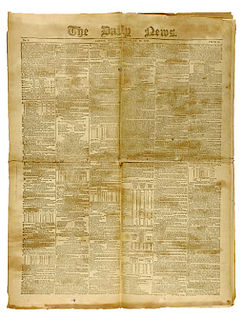 The Daily News was a national daily newspaper in the United Kingdom.

William Woodfall was an English printer and publisher in the 18th century. 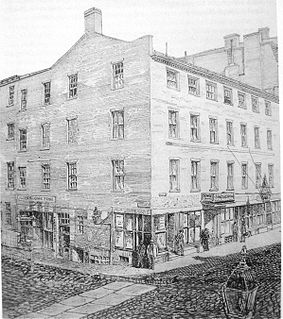 The Concert Hall (1752–1869) was a performance and meeting space in Boston, Massachusetts, located at Hanover Street and Queen Street. Meetings, dinners, concerts, and other cultural events took place in the hall.

John Black was a British journalist and newspaper editor.

Tavistock House was the London home of the noted British author Charles Dickens and his family from 1851 to 1860. At Tavistock House Dickens wrote Bleak House, Hard Times, Little Dorrit and A Tale of Two Cities. He also put on amateur theatricals there which are described in John Forster's Life of Charles Dickens. Later, it was the home of William and Georgina Weldon, whose lodger was the French composer Charles Gounod, who composed part of his opera Polyeucte at the house.

William Mudford, was a British writer, essayist, translator of literary works and journalist. He also wrote critical and philosophical essays and reviews. His 1829 novel The Five Nights of St. Albans: A Romance of the Sixteenth Century received a good review from John Gibson Lockhart, an achievement which was considered a rare distinction. Mudford also published short fictional stories which were featured in periodicals such as Blackwood's Edinburgh Magazine, Fraser's Magazine, and Bentley's Miscellany. His short story The Iron Shroud, about an iron torture chamber which shrinks through mechanical action and eventually crushes the victim inside, was first published in August 1830 by Blackwood's Edinburgh Magazine, and later republished separately in 1839 and 1840 with the subtitle "Italian Revenge". Edgar Allan Poe is considered to have been influenced by The Iron Shroud when he wrote The Pit and the Pendulum having got his idea for the shrinking chamber from Mudford's story. Mudford was born in London, where his father made a living as a shopkeeper in Piccadilly. He was influenced by John Milton, Joseph Addison, Samuel Johnson, William Cowper, William Collins, Mark Akenside, Thomas Gray, and Oliver Goldsmith.

James Wroe (1788–1844), was the only editor of the radical reformist newspaper the Manchester Observer, the journalist who named the incident known as the Peterloo massacre, and the writer of pamphlets as a result that brought about the Reform Act 1832.

The True Sun was a London, pro-Whig, evening newspaper that was first published on 5 March 1832 and ceased publication in December 1837. It was published daily except Sundays. 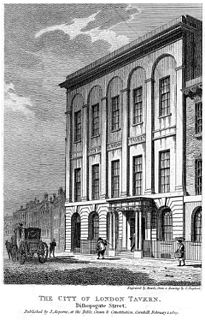 The City of London Tavern or London Tavern was a notable meeting place in London during the 18th and 19th centuries. A place of business where people gathered to drink alcoholic beverages and be served food, the tavern was situated in Bishopsgate in the City of London. The original tavern was destroyed in a fire on 7 November 1765 and the new building was designed by William Jupp the elder and opened in September 1768. In 1828, the proprietor was Charles Bleaden. The building was demolished in 1876. The tavern boasted a large and well-decorated dining room with Corinthian columns. It hosted numerous public and private meetings held to rally support to various political, charitable and other causes.

William Cunliffe Lister was a British Whig politician, and barrister.