The Glen Bridge is a two lane bridge that carries NY 28 across the Hudson River connecting Johnsburg, New York with Chester, built in 1959. [2]

New York State Route 28 (NY 28) is a state highway extending for 281.69 miles (453.34 km) in the shape of a "C" between the Hudson Valley city of Kingston and southern Warren County in the U.S. state of New York. Along the way, it intersects several major routes, including Interstate 88 (I-88), U.S. Route 20 (US 20), and the New York State Thruway twice. The southern terminus of NY 28 is at NY 32 in Kingston and the northern terminus is at US 9 in Warrensburg. In Kingston, NY 28 is co-designated as Interstate 587 from its southern terminus at NY 32 to the roundabout linking it to the Thruway (I-87).

Johnsburg is a town in the northwest corner of Warren County, New York, United States. It is part of the Glens Falls Metropolitan Statistical Area. The town population was 2,450 at the 2000 census. The town is named after John Thurman, an early settler and founder. Johnsburg is the largest town in Warren County by area.

Interstate 87 (I-87) is a 333.49-mile-long (536.70 km) Interstate Highway located entirely within the U.S. state of New York, and is most of the main highway between New York City and Montreal. The highway begins in the Bronx borough of New York City, just north of the Triborough Bridge. From there, the route runs northward through the Hudson Valley, the Capital District, and the easternmost part of the North Country to the Canadian border in the Town of Champlain. At its north end, I-87 continues into Quebec as Autoroute 15 (A-15). I-87 connects with several regionally important roads: I-95 in New York City, New York State Route 17 near Harriman, I-84 near Newburgh, and I-90 in Albany. The route is the longest intrastate Interstate Highway in the Interstate Highway System. The highway is not contiguous with I-87 in North Carolina.

Hudson Falls is a village located in Washington County, New York, USA. The village is in the southwest of the town of Kingsbury, on US Route 4. Hudson Falls is part of the Glens Falls Metropolitan Statistical Area. As of the 2000 census, the village had a population of 6,927. It was the county seat of Washington County until 1994, when the county seat was moved to Fort Edward. 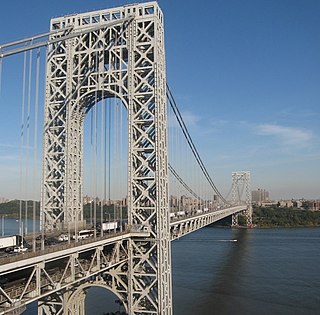 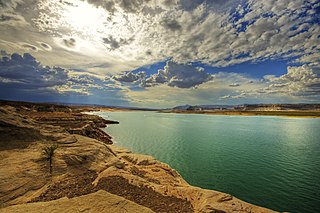 The Hudson Valley comprises the valley of the Hudson River and its adjacent communities in the U.S. state of New York, from the cities of Albany and Troy southward to Yonkers in Westchester County. Depending upon the definition delineating its boundaries, the Hudson Valley encompasses a growing metropolis which is home to between 3 and 3.5 million residents centered along the north-south axis of the Hudson River.

Watkins Glen State Park is located in the village of Watkins Glen, south of Seneca Lake in Schuyler County in New York's Finger Lakes region. The park's lower part is near the village, while the upper part is open woodland. It was opened to the public in 1863 and was privately run as a tourist resort until 1906, when it was purchased by New York State. Initially known as Watkins Glen State Reservation, the park was first managed by the American Scenic and Historic Preservation Society before being turned over to full state control in 1911. Since 1924, it has been managed by the Finger Lakes Region of the New York State Office of Parks, Recreation and Historic Preservation. 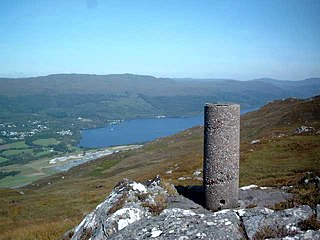 The Great Glen, also known as Glen Albyn or Glen More is a long and straight glen in Scotland running for 62 miles (100 km) from Inverness on the edge of Moray Firth, to Fort William at the head of Loch Linnhe.

U.S. Route 4 is a 253-mile (407 km) long United States highway that runs from East Greenbush, New York, in the west to Portsmouth, New Hampshire, in the east, traversing Vermont. 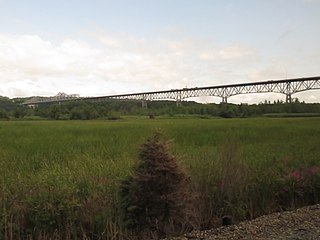 The Rip Van Winkle Bridge is a cantilever bridge spanning the Hudson River between Hudson, New York and Catskill, New York. The structure carries NY 23 across the river, connecting US 9W and NY 385 on the west side with NY 9G on the east side. The bridge is named after the 1819 short story of the same name by Washington Irving, which mentions Hudson and Catskill.

The Mid-Hudson Bridge is a toll suspension bridge which carries US 44 and NY 55 across the Hudson River between Poughkeepsie and Highland in the state of New York. Governor and local resident Franklin D. Roosevelt and his wife Eleanor attended the opening ceremony on August 25, 1930. The bridge was renamed the "Franklin D. Roosevelt Mid-Hudson Bridge" in 1994 though the span is rarely referred to by its official name.

The Kingston–Rhinecliff Bridge or George Clinton Memorial Bridge is a continuous under-deck truss bridge that carries NY 199 across the Hudson River in New York State north of the City of Kingston and the hamlet of Rhinecliff. It was opened to traffic on February 2, 1957 as a two-lane bridge, although it was not actually complete. Formal opening was May 11, 1957. The original cost was $17.5 million. 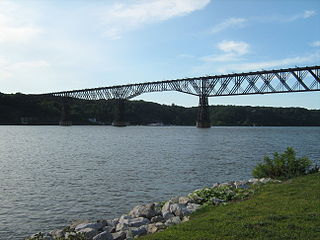 The Walkway over the Hudson is a steel cantilever bridge spanning the Hudson River between Poughkeepsie, New York, on the east bank and Highland, New York, on the west bank. Built as a double track railroad bridge, it was completed on January 1, 1889, and formed part of the Maybrook Railroad Line of the New Haven Railroad. 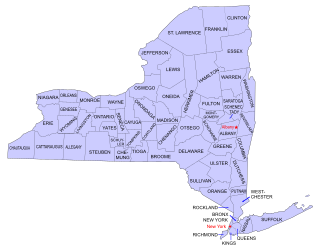 U.S. Route 9 (US 9) is a part of the U.S. Highway System that runs from Laurel, Delaware, to Champlain, New York. In New York, US 9 extends 324.72 miles (522.59 km) from the George Washington Bridge in Manhattan to an interchange with Interstate 87 (I-87) just south of the Canada–United States border in the town of Champlain. US 9 is the longest north–south U.S. Highway in New York; additionally, the portion of US 9 in New York accounts for more than half of the highway's total length. 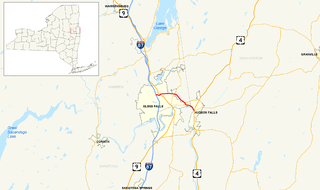 New York State Route 254 (NY 254) is a state highway that extends for 6.01 miles (9.67 km) through Warren and Washington counties in the Capital District of New York in the United States. The route runs from exit 19 along the Adirondack Northway in Queensbury and follows Aviation Road, Quaker Road, and Lower Warren Street through Queensbury to Hudson Falls, where it terminates at an intersection with U.S. Route 4 (US 4) in the center of the village. 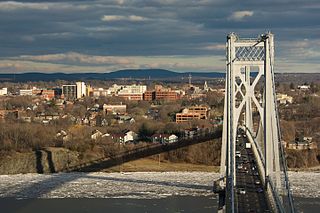 Franny Reese State Park is a 251-acre (1.02 km2) state park located in the Town of Lloyd in Ulster County, New York. The park is managed by Scenic Hudson and is part of the Palisades Interstate Park system. 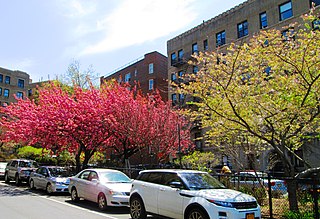 Plaza Lafayette is a small, 0.09-acre (0.036 ha) park and surrounding streets in the Hudson Heights neighborhood of Washington Heights, Manhattan, New York City. Named after the Marquis de Lafayette, the French hero of the American Revolution, the park is roughly trapezoidal in shape, and is bounded by Riverside Drive – originally called Boulevard Lafayette in this area – on the west, the westbound lane of West 181st Street – also called "Plaza Lafayette" here – on the north, the eastbound lane of West 181st Street/Plaza Lafayette on the south, and Haven Avenue on the east. The land was acquired by the city on February 23, 1918. 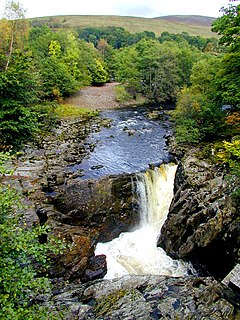 The River Spean flows from Loch Laggan in a westerly direction to join the River Lochy at Gairlochy in the Great Glen in the West Highlands of Scotland. Major tributaries of the Spean include the left-bank Abhainn Ghuilbinn and River Treig, the right-bank River Roy and the left-bank river known as The Cour. The river is accompanied by the A86 road for almost its entire length, running from (upper) Loch Laggan west to Spean Bridge. The river is spanned by a bridge carrying the A82 road near its junction with the A86 at Spean Bridge. A minor road bridges the Spean just above the falls at Inverlair. Two further road crossings exist - a private estate road across the short stretch of river between upper Loch Laggan and the Laggan reservoir and a road traversing the top of Laggan Dam. The West Highland Line crosses the river near Tulloch Station and follows its north bank before re-crossing a mile to the east of Spean Bridge. A branch of the railway formerly continued west beside the river from Spean Bridge, crossing it once again to the west of the village.