The Old Curiosity Shop is a 1984 Australian animated film based on the 1841 novel by Charles Dickens about a young girl (Nell) who lives with her grandfather in a shop, and what happens after they are evicted from the shop by Quilp, a moneylender. [1] It was made by Burbank Films who produced a number of animated films based on classic novels. [2] Their slate cost an estimated $11 million. [3] The Dickens films sold to 20th Century Fox in the US and to the Seven Network in Australia. [4]

The Strathfield massacre was a shooting rampage at a shopping mall in Strathfield, Sydney, Australia, on 17 August 1991. The shooter was Wade Frankum, who killed himself as police arrived at the scene. The incident left eight dead and six wounded.

The South Australian Open was a golf tournament on the PGA Tour of Australasia and the Nationwide Tour.

John Saunderson is an Australian politician and trade unionist. He was an Australian Labor Party member of the Australian House of Representatives from 1983 to 1990, representing the electorates of Deakin (1983–84) and Aston (1984-90). 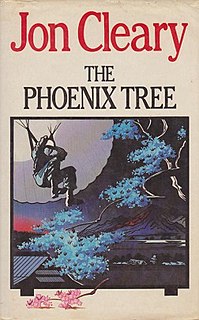 The Phoenix Tree is a 1984 novel from Australian author Jon Cleary set in Japan during the last days of World War II.

Igor Auzins is an Australian filmmaker. He joined Crawford Productions in 1969 and worked as a cameraman, then a director. He made documentaries for the South Australian Film Corporation, TV commercials, tele movies and features.

Deadline is a 1981 Australian-American made-for-television thriller drama film directed by Arch Nicholson and co-produced by the Australian division of Hanna-Barbera and New South Wales Film Corporation.

Big Toys is a 1977 Australian play by Patrick White. It was his first play in 14 years.

Water Under the Bridge is a 1980 miniseries based on the 1977 novel by Sumner Locke Elliott.

Eureka Stockade is a 1984 Australian miniseries based on the battle of Eureka Stockade. It reunited the producer, writer and star of A Town Like Alice.

All the Green Year is a 1980 Australian television series based on a novel about three boys growing up near Melbourne on the eve of the Great Depression.

"A Time to Speak" is a 1965 Australian television film, which aired on ABC. It is a period drama set around 1900. It was written by Noel Robinson. This was the third production to appear in three weeks.

Wednesday Theatre is a 1960s Australian anthology show which aired on the ABC.

"The Affair" is a 1965 Australian television play based on the novel by C. P. Snow. It starred Roger Climpson, Richard Meikle and Anne Haddy and aired on the ABC as part of Wednesday Theatre.

"A Ride on the Big Dipper" is a 1967 Australian television play. It screened as part of Wednesday Theatre and had a running time of one hour.

Sara Dowse is an American-born Australian feminist, author, critic, social commentator, and visual artist. Her novels include Schemetime published in 1990, Sapphires, and As the Lonely Fly, and she has contributed reviews, articles, essays, stories, and poetry to a range of print and online publications. Dowse posted a blog, Charlotte is Moved with political, social and artistic themes, from 2013 to 2016.

The Nedlands Masters was a professional golf tournament in Australia, held at the Nedlands Golf Club in Nedlands, Perth, Western Australia. It was first played in 1947, again in 1950, and then annually from 1962. Like the Masters Tournament, the winner of the tournament was presented with a green jacket.