The Secret Adventures of Tom Thumb

The story follows the tiny Tom Thumb as he is abducted from his loving parents and taken to an experimental laboratory, and his subsequent escape. He discovers a community of similarly-sized people living in a swamp, who help him on his journey to return to his parents. The film is largely dialogue-free, limited mostly to grunts and other non-verbal vocalisations.

Inside an artificial insemination factory, a mechanical wasp hovering around the establishment is crushed to death by the machinery's gears, causing its vitals to drop into one of the jars on the conveyor belt. This results in a woman giving birth to a thumb-sized fetus-like child in her and her husband's house in a grim and slum urban town. Outside, a man in a black suit witnesses the whole scene and goes to an alley to encounter Pa Thumb, who picks up a ventriloquist box-shaped doll house to make his son's bedroom. The man simply grins at the him but leaves when he gets creeped out by the ventriloquist's dummy at the window of a toy shop.

Pa and Ma Thumb raise their son and decide to call him "Tom Thumb".

The Secret Adventures of Tom Thumb was made using a combination of stop-motion animation and pixilation (live actors posed and shot frame-by-frame), often with live actors and puppets sharing the frame. It was originally commissioned as a 10-minute short for BBC2's Christmas programming, but was rejected for being too dark for the festive season. The short version nevertheless garnered critical acclaim through showings at animation festivals, and a feature-length version was commissioned by the BBC a year later. 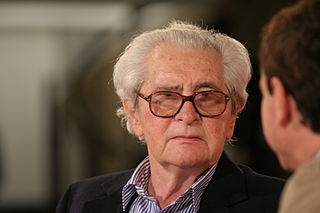 Břetislav Pojar was a Czech puppeteer, animator and director of short and feature films.

Pannonia Film Studio is the largest animation studio in Hungary, based in the capital of Budapest.

Ferenc Cakó is a Hungarian artist whose specialty is performing sand animation.

Gergely Sárközy is a Hungarian musician who plays guitar, lute, lute-harpsichord, viola bastarda, and organ. He has produced numerous recordings and has helped in the creation of animated film soundtracks including that of A nyár szemei for which he won an Award for Best Sound Engineering together with Nikolai Ivanov Neikov at the 4th Kecskemét Animation Film Festival.

István Orosz is a Hungarian painter, printmaker, graphic designer and animated film director. He is known for his mathematically inspired works, impossible objects, optical illusions, double-meaning images and anamorphoses. The geometric art of István Orosz, with forced perspectives and optical illusions, has been compared to works by M. C. Escher. 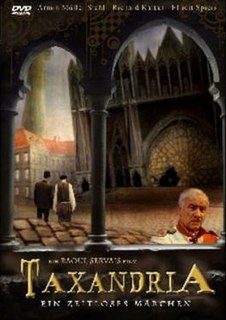 Taxandria is a partially animated fantasy film by Raoul Servais, collaborating on a script with Frank Daniel and French writer Alain Robbe-Grillet, and starring, among others, Armin Mueller-Stahl. Being Servais's first and to date only feature film, Taxandria is notable for the use of Servais's distinct animation style, the servaisgraphie, as well as its connection to the Belgian graphic novel series Les Cités Obscures whose creator François Schuiten was the film's production designer.

Raoul Servais is a Belgian filmmaker, animator, and comics artist. He is a fundamental figure of the Belgian animation scene, as well as the founder of the animation faculty of the Royal Academy of Fine Arts (KASK). He was born in Ostend. Servais was awarded with Lifetime Achievement Award at the World Festival of Animated Film - Animafest Zagreb in 2016. He is best known for the 1979 animated film Harpya. At the 9th Magritte Awards, Servais received an Honorary Magritte Award from the Académie André Delvaux.

bolexbrothers was an independent British animation studio founded by Dave Borthwick and Dave Alex Riddett in Bristol, UK. The studio specialised in stop motion and pixilation animation, producing numerous short films and commercials, as well as two feature films, The Secret Adventures of Tom Thumb (1993) and The Magic Roundabout, (2005). The studio was named after the Bolex brand of 16mm cameras once popular with animators and was first established as a collective of artists in the 1980s before becoming a company in 1991 and running to roughly 2008.

Ferenc Rofusz is a Hungarian animator. He is known for the 1980 Academy Award-winning animated short The Fly.

Maestro is a 2005 Hungarian computer-animated short film written, produced and directed by Géza M. Tóth. It won the Amaryllis Tamás Award at the 7th Kecskemét Animation Film Festival, and was nominated for Best Animated Short Film at the 79th Academy Awards in 2007. Composer Attila Pacsay wrote the film's music. 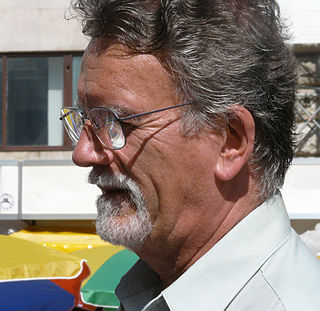 Marcell Jankovics is a Hungarian graphic artist, film director, animator and author. He received his Oscar nomination for the 1974 animated short movie Sisyphus. That movie was used for a GMC Yukon Hybrid ad during the 2008 Super Bowl based on an agreement between the Hungarian film studio Pannónia and GM. He also received a Palme d'Or for the short movie The Struggle at the 1977 Cannes Film Festival. He has been presented multiple awards at the Kecskemét Animation Film Festival since 1985. In 2009, he was presented the Leonardo da Vinci World Award of Arts His fourth feature film The Tragedy of Man was in production from 1988 until its release in 2011.

Jean-François Laguionie is a French animator, film director and producer of animation.

Zoltán Szilágyi Varga is a Hungarian graphic artist and animation director. He has received Béla Balázs Prize for his work, and has been honored at five separate Kecskemét Animation Film Festivals (KAFF), winning two memorial awards as well as prizes for Best Animation, Best Visual Language, and Best Script twice each.

Toys in the Attic is a 2009 internationally co-produced stop-motion animated fantasy comedy thriller family film directed by Jiří Barta and written by Edgar Dutka and Barta which depicts a community of toys and other objects in an attic who come to life when no human is around. It is an international co-production between the Czech Republic, France, Japan and Slovakia. The film was released first in the Czech Republic on 5 March 2009 and has been shown subtitled at film festivals internationally. An American dub – adapted, produced and directed by Vivian Schilling and performed by actors including Forest Whitaker, Joan Cusack, Cary Elwes and Schilling herself – has been recorded, which the film was first shown with on 3 March 2012 at the New York International Children's Film Festival and was released nationally on 24 August 2012 by Hannover House.

Kecskemét Animation Film Festival (KAFF) is an animated film festival held biennially during the month of June in Kecskemét, Hungary. Although the bulk of the festival is oriented toward efforts in Hungarian animation, the associated KAFF-sponsored Festival of European Animated Feature Films and TV Specials has opened the festival to international works as well. The festival was first held in 1985 and was opened to international works of animation in 1996.

The Painting is a 2011 French animated film directed by Jean-François Laguionie.