The Surfaris are an American surf rock band formed in Glendora, California, United States, in 1962. [1] [2] They are best known for two songs that hit the charts in the Los Angeles area, and nationally by May 1963: "Surfer Joe" and "Wipe Out", which were the A-side and B-side of the same 45 rpm single.

The Surfaris were inducted into the Musicians Hall of Fame and Museum in 2019 for their hit instrumental song, "Wipe Out".

In the fall of 1962, Southern California high school students Jim Fuller and Pat Connolly competed against Bob Berryhill in a local talent show and wanted to create a band. Fuller and Connoly called Berryhill one day to ask if he wanted to practice, since he had an amp. After practicing the two planned told Berryhill they were going meet with drummer Ron Wilson at a high school dance. That night they played their first dance at Pomona Catholic High School after a football game. "Wipe Out" was written and recorded by the quartet later that winter, with the song reaching No. 2 nationally in 1963 before becoming an international # 1 hit. [1]

Wilson's energetic drum solo made "Wipe Out" one of the best-remembered drum solos instrumental songs of the period. "Wipe Out" is also remembered particularly for its introduction. Before the music starts, Berryhill's dad found a piece of plywood in back of the studio and Pat broke the board (imitating a breaking surf board) over the mic, followed by a maniacal laugh and the words "Wipe Out" spoken by band manager Dale Smallin. "Wipe Out" was written in the studio by the four original members (Berryhill, Connolly, Fuller, and Wilson). It was initially issued on the tiny DFS label (#11/12) in January 1963. It was reissued on the tiny Princess label (#50) in February 1963. It was picked up by Dot (45-16479) in April 1963, and reissued as Dot 45-144 in April 1965. It sold over one million copies and was awarded a gold disc. [3]

Following the death of television personality Morton Downey Jr., news reports and obituaries incorrectly credited him as the composer of "Wipe Out" (as well as the Chantays' "Pipeline"). [4] As of 2010 [update] , Downey's official website continued to make this claim but it has been changed to state he "also played major roles in the production of the hit surf music-era songs "Pipeline" and "Wipeout" which was not the case." [5]

The band released a series of records, with two other singles, "Surfer Joe" (written and sung by Wilson) and "Point Panic" (another group-composed instrumental), having an impact on the charts. Point Panic is a renowned surfing venue in Hawaii after which the song was named.

The original 1963 membership remained intact until August 1965 when Connolly departed before their Japanese tour. Ken Forssi replaced him on bass for the tour. [1] Fuller resigned after the tour and the band folded in early 1966. Forssi died from a brain tumor in 1998. [1]

Ron Wilson died of a brain aneurysm on May 12, 1989, one month short of his 45th birthday. Wilson had released an album of his songs, entitled Lost In The Surf, on Bennet House Records of Grass Valley, California, which was recorded in June 1987. A very small number of cassettes of this album were produced. Lost in the Surf included a cover of "Louie Louie", complete with Scottish bagpipes.

Jim Pash, who played saxophone in the earlier formation and was later a guitarist, died April 29, 2005 of heart failure at age 56.

Jim Fuller played with a newly formed Surfaris in the 1980s with Pash and Berryhill. After Berryhill left to start his own Surfaris due to conflicts, Fuller's band in the mid-'80s, added new players such as Kelly Lammers, Robert Watson, Jay Truax, Paul Johnson (Mr. Moto), and Dave Raven, among others all concurrent with his own side band, Jim Fuller and the Beatnik until his passing on March 3, 2017 in Monrovia, California at age 69. [6] [7]

On June 25, 2019, The New York Times Magazine listed The Surfaris among hundreds of artists whose material was reportedly destroyed in the 2008 Universal fire. [8]

Bob Berryhill, the last original member playing professionally, currently performs worldwide as The Surfaris with his wife Gene Berryhill and sons, Deven and Joel Berryhill. [1] In 2003, Berryhill's band recorded Wipe Out and 8 new original songs, which is what he wanted to do for the first Wipe Out session in 1962. At the time, the boys just 15 and 17 years old were forced to play other writers' songs, not by The Surfaris, which were later replaced by the company's players while The Surfaris were on tour. Law suits ensued in favor of The Surfaris. In 2015, Berryhill recorded and released a critically acclaimed album entitled The Surfaris Hurley Sessions. 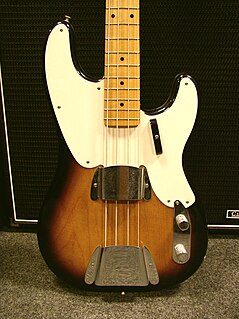 Surf music is rock music associated with surf culture, particularly as found in Southern California. It was especially popular from 1962 to 1964 in two major forms. The first is instrumental surf, distinguished by reverb-heavy electric guitars played to evoke the sound of crashing waves, largely pioneered by Dick Dale and the Del-Tones. The second is vocal surf, which took elements of the original surf sound and added vocal harmonies, a movement led by the Beach Boys.

The Trashmen were a surf rock band formed in Minneapolis, Minnesota, in 1962. The original lineup of the group featured guitarists Tony Andreason and Dal Winslow, bassist Bob Reed, and drummer Steve Wahrer.

The Lively Ones were an instrumental surf rock band from USA, active in Southern California in the 1960s. They played live mostly in California and Arizona. They recorded for Del-Fi records with production from Bob Keane. They recorded mostly cover songs, but there were a few originals.

James Evans Fuller was the lead guitarist and co-songwriter of 1960s rock band The Surfaris.

Surfbeat was the first album recorded by the Los Angeles-based surf rock group The Challengers. They recorded the album in a 3½ hour session at the end of 1962. The album was released in early 1963 and became a huge hit, helping to propel the surf genre. It was sought by collectors for many years and gained great notoriety in the obscure surf market. In 1994, Sundazed records, a company with a lot of vintage surf at its disposal, released the album on CD with two bonus tracks.

The Bel-Airs were an early and influential surf rock band from South Bay, Los Angeles, active in the early 1960s.

Live Bootleg '82 is the title of a live album by rock band Daniel Amos, released on Stunt Records in 1990. 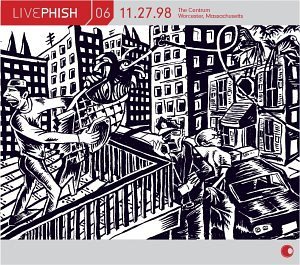 Live Phish Vol. 6 was recorded live on the first night of a three night stand at the Worcester Centrum in Worcester, Massachusetts, on November 27, 1998. 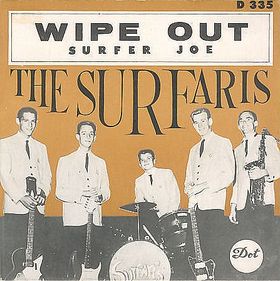 "Wipe Out" is a surf rock instrumental composed by Bob Berryhill, Pat Connolly, Jim Fuller and Ron Wilson. Composed in the form of twelve-bar blues, the tune was first performed and recorded by the Surfaris, who became famous with the single in 1963.

Ronald Lee Wilson was an American musician and recording artist, best known as an original member and drummer of The Surfaris, an early surf music group of the 1960s. Wilson's energetic drum solo on "Wipe Out" made it the best-remembered instrumental song of the period. 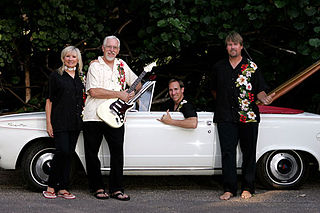 Bob Berryhill was a member of The Surfaris and co-writer and recording artist of "Wipe Out" and other Surfaris' hits. In 1960, when Berryhill was 13, he took a trip to the Hawaiian Islands and learned to surf and play ukulele. On returning to California, he began working seriously on guitar and two years later, "Wipe Out" was born. His role of rhythm guitar merged into lead guitar later with his new band, The Surfaris featuring Bob Berryhill.

James Edward Pash was an American musician and recording artist. Pash was originally the surf saxophonist for The Surfaris, an early California surf rock group in the 1960s, known for the 1963 instrument hit "Wipe Out". In later years, Pash dedicated his time to his Harp of David project, a recreation of the original harp and song melodies used by King David of the Bible.

The Original Surfaris were a surf music band from California. They were active from the early to mid 1960s and had singles released on various labels which included the Del-Fi, Northridge and Reprise labels.

"Church Key" is a classic instrumental single that was released by California surf group The Revels on Tony Hilder's Impact Records label in 1960. It was a hit for the group and later a hit for Dave Myers and his Surf-Tones.

Dave Myers and The Surftones were a Southern California surf group who are most likely remembered for the few singles they recorded in the 1960s which include their cover of The Revels hit "Church Key" and their time at the Rendezvous Ballroom in Balboa, California.

Wipe Out is the debut studio album by The Surfaris, released in 1963. It contains their best known song "Wipe Out". 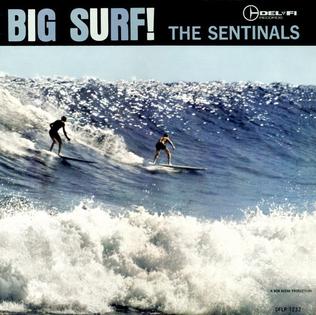 "Exotic" is a song composed by Bruce Morgan and recorded by various bands back in 1963 when it was first released. 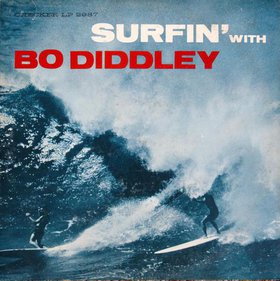 Surfin' with Bo Diddley is the tenth studio album by blues musician Bo Diddley released on the Checker label in 1963.