These 13 is a 1931 collection of short stories written by William Faulkner, and dedicated to his first daughter, Alabama, who died nine days after her birth on January 11, 1931, and to his wife Estelle. No longer in print, These 13 is now a collector's item.

"Red Leaves" is a short story by American author William Faulkner. First published in the Saturday Evening Post on October 25, 1930, it was one of Faulkner's first stories to appear in a national magazine. The next year the story was included in These 13, Faulkner's first collection of short stories.

"That Evening Sun" is a short story by the American author William Faulkner, published in 1931 on the collection These 13, which included Faulkner's most anthologized story, "A Rose for Emily". The story was originally published, in a slightly different form, as "That Evening Sun Go Down" in The American Mercury in March of the same year. "That Evening Sun" is a dark portrait of white Southerners' indifference to the crippling fears of one of their black employees, Nancy. The story is narrated by Quentin Compson, one of Faulkner's most memorable characters, and concerns the reactions of him and his two siblings, Caddy and Jason, to an adult world that they do not fully understand. The black washerwoman, Nancy Mannigoe, fears that her common-law husband Jesus is seeking to murder her because she is pregnant with a white man's child. The title is thought to be taken from the song Saint Louis Blues, originally composed by W.C. Handy, but popularized by Bessie Smith and Louis Armstrong in 1927. Faulkner first came across Handy's music when the latter played dances in Oxford, Mississippi. Though the song is never explicitly referenced in the text, Faulkner employs a number of blues tropes to structure the plot and develop racial stereotypes. Scholar Ken Bennett notes that "the image of the 'evening sun' is a common one in black religious music. For example, the spiritual 'It's Gettin' Late Over in the Evenin', the Sun Most Down,' based on Revelation 20, uses the image of the evening sun to suggest the coming of death and judgment." 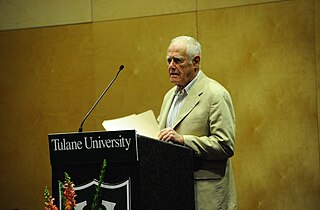 James Arnold Horowitz, better known as James Salter, his pen name and later-adopted legal name, was an American novelist and short-story writer. Originally a career officer and pilot in the United States Air Force, he resigned from the military in 1957 following the successful publication of his first novel, The Hunters. 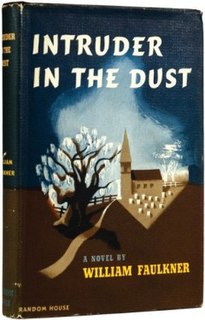 Intruder in the Dust is a novel by the Nobel Prize–winning American author William Faulkner published in 1948.

Edward Paul Jones is an American novelist and short story writer. His 2003 novel The Known World received the Pulitzer Prize for Fiction and the International IMPAC Dublin Literary Award.

Walter Abish is an Austrian-American author of experimental novels and short stories. He was awarded an MacArthur Fellowship in 1987.

"Dry September" is a short story by William Faulkner. Published in 1931, it describes a lynch mob forming on a hot September evening to avenge an alleged insult or attack upon a white woman by a black watchman, Will Mayes. Told in five parts, the story includes the perspective of the rumored female victim, Miss Minnie Cooper, and of the mob's leader, John McLendon. It is one of Faulkner's shorter stories.

"Shingles for the Lord" is a short story written by the American author William Faulkner, first published in The Saturday Evening Post in 1943. The story takes place in Faulkner's Yoknapatawpha County focusing on Res Grier, a struggling farmer, as he joins his neighbors in roofing the old church house and is narrated by his son in colloquial language. The story is on the surface a comic diversion, developing a plot similar to that of a situation comedy in which the attempt of one character to outsmart the others leads him to a sort of banishment or ostracism from which he must recuperate himself in order to reclaim his place in the community. 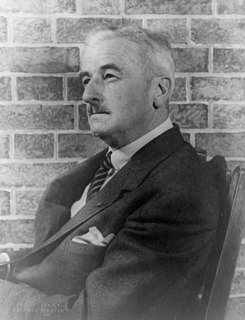 Whit Burnett was an American writer and writing teacher who founded and edited the literary magazine Story. In the 1940s, Story was an important magazine in that it published the first or early works of many writers who went on to become major authors. Not only did Burnett prove to be a valuable literary birddog for new talent, but Story remained a respectable though low-paying alternative for stories rejected by the large-circulation slick magazines published on glossy paper like Collier's or The Saturday Evening Post or the somewhat more prestigious and literary slick magazines such as The New Yorker. While Story paid poorly compared to the slicks and even the pulps and successor digest-sized magazines of its day, it paid better than most of, and had similar cachet to, the university-based and the other independent "little magazines" of its era.