Thirst for Blood, Hunger for Flesh

Thirst for Blood, Hunger for Flesh is a compilation album by Abscess featuring tracks from various demos, EPs, splits, and singles. It was released by Necroharmonic Productions in 2003.

Abscess was an American death metal band from Oakland, California. The band was formed in June 1994 by Chris Reifert and Danny Coralles, both former members of Autopsy. Abscess disbanded in 2010. 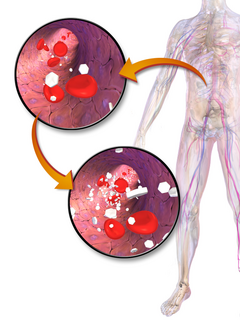 Hyperglycemia, also known as high blood sugar, is a condition in which an excessive amount of glucose circulates in the blood plasma. This is generally a blood sugar level higher than 11.1 mmol/l (200 mg/dl), but symptoms may not start to become noticeable until even higher values such as 15–20 mmol/l (~250–300 mg/dl). A subject with a consistent range between ~5.6 and ~7 mmol/l is considered slightly hyperglycemic, while above 7 mmol/l is generally held to have diabetes. For diabetics, glucose levels that are considered to be too hyperglycemic can vary from person to person, mainly due to the person's renal threshold of glucose and overall glucose tolerance. On average however, chronic levels above 10–12 mmol/L can produce noticeable organ damage over time. 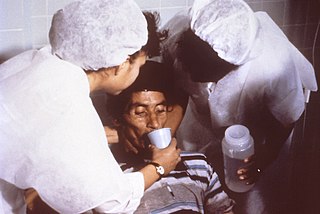 In physiology, dehydration is a deficit of total body water, with an accompanying disruption of metabolic processes. It occurs when free water loss exceeds free water intake, usually due to exercise, disease, or high environmental temperature. Mild dehydration can also be caused by immersion diuresis, which may increase risk of decompression sickness in divers. 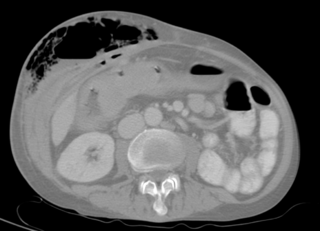 A fistula is an abnormal connection between two hollow spaces, such as blood vessels, intestines, or other hollow organs. Fistulas are usually caused by injury or surgery, but they can also result from an infection or inflammation. Fistulas are generally a disease condition, but they may be surgically created for therapeutic reasons. 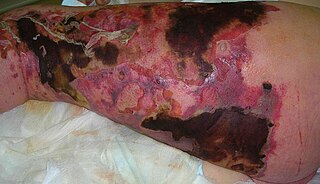 Necrotizing fasciitis (NF), commonly known as flesh-eating disease, is an infection that results in the death of parts of the body's soft tissue. It is a severe disease of sudden onset that spreads rapidly. Symptoms include red or purple skin in the affected area, severe pain, fever, and vomiting. The most commonly affected areas are the limbs and perineum. 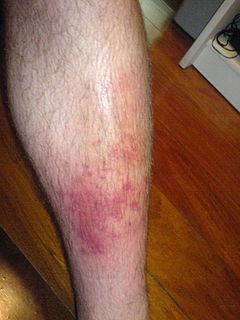 Cellulitis is a bacterial infection involving the inner layers of the skin. It specifically affects the dermis and subcutaneous fat. Signs and symptoms include an area of redness which increases in size over a few days. The borders of the area of redness are generally not sharp and the skin may be swollen. While the redness often turns white when pressure is applied, this is not always the case. The area of infection is usually painful. Lymphatic vessels may occasionally be involved, and the person may have a fever and feel tired.

The Swadesh list is a classic compilation of basic concepts for the purposes of historical-comparative linguistics. Translations of the Swadesh list into a set of languages allow researchers to quantify the interrelatedness of those languages. The Swadesh list is named after linguist Morris Swadesh. It is used in lexicostatistics and glottochronology. Because there are several different lists, some authors also refer to "Swadesh lists".

ICD-9-CM Volume 3 is a system of procedural codes used by health insurers to classify medical procedures for billing purposes. It is a subset of the International Statistical Classification of Diseases and Related Health Problems (ICD) 9-CM. Volumes 1 and 2 are used for diagnostic codes. 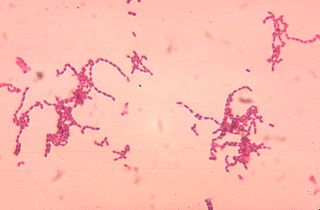 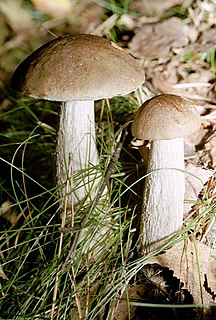 Leccinum scabrum, commonly known as the rough-stemmed bolete, scaber stalk, and birch bolete, is an edible mushroom in the family Boletaceae, and was formerly classified as Boletus scaber. The birch bolete is widespread in Europe, in the Himalayas in Asia, and elsewhere in the Northern Hemisphere, occurring only in mycorrhizal association with birch trees. It fruits from June to October. This mushroom is also becoming increasingly common in Australia and New Zealand where it is likely introduced.

Hyperosmolar hyperglycemic state (HHS) is a complication of diabetes mellitus in which high blood sugar results in high osmolarity without significant ketoacidosis. Symptoms include signs of dehydration, weakness, legs cramps, vision problems, and an altered level of consciousness. Onset is typically over days to weeks. Complications may include seizures, disseminated intravascular coagulopathy, mesenteric artery occlusion, or rhabdomyolysis.

Desomorphine is a synthetic opioid developed by Roche, with powerful, fast-acting effects, such as sedation and analgesia. It was first discovered and patented by a German team working for Knoll in 1922 but wasn't generally recognized. It was later synthesized in 1932 by Lyndon Frederick Small, who also successfully patented it in 1934 in the United States, desomorphine was used in Switzerland under the brand name Permonid and was described as having a fast onset and a short duration of action, with relatively little nausea compared to equivalent doses of morphine. Dose-by-dose it is eight to ten times more potent than morphine.

A amoebic liver abscess is a type of liver abscess caused by amebiasis. It is the involvement of liver tissue by trophozoites of the organism Entamoeba histolytica and of is abscess due to necrosis. 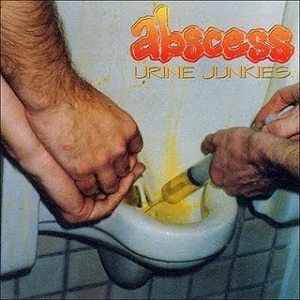 Urine Junkies is a compilation album by the death metal band Abscess featuring tracks from various demos and EPs. It was released by Relapse Records in 1995.