Last updated September 27, 2020
This article is about the death metal band. For the medical condition, see Abscess.

Abscess was an American death metal band from Oakland, California, United States. The band was formed in June 1994 by Chris Reifert and Danny Coralles, both former members of Autopsy. [1] Abscess disbanded in 2010.

F-Minus was an American hardcore punk band formed in 1995 in Huntington Beach, California, United States, started by Jen Johnson and Brad Logan. F-Minus was known for their dueling male and female vocals in songs that were sometimes as short as 12 seconds. Before breaking up in 2004, their last album was recorded by Steve Albini. Throughout their career, they covered such bands as Antidote, Black Randy and the Metro Squad, 7 Seconds, Negative Approach, and Agnostic Front. Brad Logan currently runs his own record label Blacknoise, and is also member of the New York band Leftöver Crack. Jen Johnson currently is the designer and owner of clothing label E.C. Star, and also is a member of the California band Ammunition Affair. 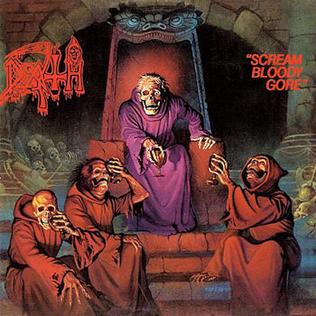 Scream Bloody Gore is the debut studio album by American death metal band Death, released on May 25, 1987, through Combat Records. It is considered by some to be "the first true death metal record". Chuck Schuldiner plays bass and guitar, wrote all the songs on the album and provided all the vocals. John Hand is noted on the cover as playing rhythm guitar, though this was incorrect and Hand was only in the band for a short period and was not on the recording. This is also the only Death album to feature drummer Chris Reifert, who had joined for the Mutilation demo, and the only one of the band's albums to not be recorded at Morrisound Recording.

The Undead is an American horror punk band formed in 1980 in the East Village, New York City, United States, by Bobby Steele, Chris "Jack" Natz (bass) and Patrick Blanck (drums). They were one of the pioneers in the New York hardcore scene. 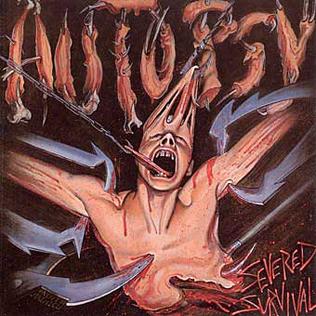 Severed Survival is the debut album by Autopsy released in 1989. This album somewhat continues in the style of Reifert's former band Death. Lyrically the band thrives heavily on horror and gore concepts; nevertheless these are not inspired directly by horror movies, although the title track is based on Stephen King's short story "Survivor Type." The album was very influential for future death metal acts such as Cannibal Corpse, Entombed, and Dismember. It was also a pioneer of gore lyrics. The album features Steve DiGiorgio on bass.

Acts of the Unspeakable is the third album by the American death metal band Autopsy. It saw a progression into punk-inspired death metal, and was the only album to feature Josh Barohn on bass.

Shitfun is the fourth studio album by Autopsy, released in 1995. It was their last album before their fourteen-year break up from 1995 to 2009. In 2003, it was re-released with ten bonus live tracks.

Damned and Mummified is a 2004 album by Abscess; released on Red Stream.

Horrorhammer is the fifth album by Abscess. It was released on April 24, 2007 on Tyrant Syndicate Productions.

Hades Rise is an album by the Norwegian black/thrash metal band Aura Noir. It features guest appearances by Danny Coralles and Blasphemer (ex-Mayhem). Art direction was by Carl-Michael Eide, layout by Justin Bartlett.

Danny Coralles is one of the current guitarist in the band Autopsy and was co-founder with drummer Chris Reifert of Abscess. Autopsy is back again and have been so since 2009 which is currently producing new material and is actively playing selected venues throughout the world. Danny, prior to forming Abscess along with Reifert have been continuous bandmates then and now in Autopsy as well as collaborations with Frank "Killjoy" Pucci in the now defunct supergroup The Ravenous, and separate side projects, Eat My Fuk and Doomed. 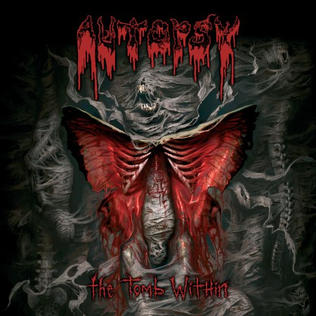 The Tomb Within is an EP by the American death metal band Autopsy, released September 13, 2010 on Peaceville Records on CD and 12” vinyl. This is the first recording Autopsy made after their split-up in 1995 and reunion in 2010. The 12” vinyl edition of The Tomb Within, limited to 1000 numbered copies, comes with a free poster of cover artwork.

Macabre Eternal is the fifth album by the American death metal band Autopsy, released on May 16, 2011, on the label Peaceville Records. It is the first studio album Autopsy have released after their 1995 disbandment and 2009 reunion. The first album to feature bassist Joe Trevisano. It is also the first album since 1989's Severed Survival not to feature any short tracks.

Deranged is a Swedish death metal band formed in 1991. The band was named after the movie Deranged.

Malignant Tumour is a Czech rock band, formed in 1991 in Ostrava.

The Headless Ritual is the sixth studio album by Autopsy, released in 2013 through Peaceville Records. It is the second album since the band's 2009 reunion.

Tourniquets, Hacksaws and Graves is the seventh studio album by American death metal band Autopsy. It was released in April 2014. As with all Autopsy albums, it was released through Peaceville Records, and as with all albums since the band's 2009 reunion, it is produced by Adam Munoz alongside the band.