Tormented is an album by Abscess released in 2000.

Planescape: Torment is a role-playing video game developed by Black Isle Studios and published by Interplay Entertainment. Released for Microsoft Windows on December 12, 1999, the game takes place in locations from the multiverse of Planescape, a Dungeons & Dragons (D&D) fantasy campaign setting. The game's engine is a modified version of the Infinity Engine, which was used for BioWare's Baldur's Gate, a previous D&D game set in the Forgotten Realms.

The biblical term "proselyte" is an anglicization of the Koine Greek term προσήλυτος (proselytos), as used in the Septuagint for "stranger", i.e. a "newcomer to Israel"; a "sojourner in the land", and in the Greek New Testament for a first-century convert to Judaism, generally from Ancient Greek religion. It is a translation of the Biblical Hebrew phrase גר תושב.

Results from Norwegian football in 2001.

In Christian theology, Hell is the place or state into which by God's definitive judgment unrepentant sinners pass either immediately after death or in the general judgment. Its character is inferred from teaching in the biblical texts, some of which, interpreted literally, have given rise to the popular idea of Hell.

In Islamic belief, Maalik denotes an angel in Hell/Purgatory who administrates the Hellfire, assisted by 19 mysterious guards known as Zabaniyya. In the Qur'an, Maalik is mentioned in Sura 43:77 as the chief of angels of hell. However the Qur'an itself does neither explain nor specifically describe the origin, purpose or character of Maalik, but Islamic traditions expands the depictions with extra-quranic narratives. Actually the earliest codices offer various alternative spellings of this word including malak meaning "angel", instead of a proper name. 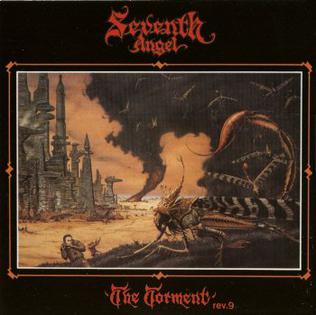 The Torment is the first studio album by the British thrash metal band Seventh Angel, released on Music for Nations label in 1990. The album established the band as "one of England's leading thrash metal bands" by The Daily Telegraph. In 2010, HM Magazine ranked it number 51 on the Top 100 Christian Metal Albums of All Time list.

Ravenous is the score for the film of the same name. It was written and performed by Damon Albarn and Michael Nyman. The score was actually not a collaboration, according to Nyman: "Ravenous was a joint composition in the sense that Damon Albarn composed 60% of the tracks and I did the rest." It features Nyman's first writing for banjo since his 1981 self-titled album.

There are multiple waterfalls in the basin of the North Fork Cascade River, a river in the North Cascades of Washington that drains to the Cascade River. Many of these are taller than the more famous waterfalls in North America, but do not receive much attention due to their remoteness.

The 1971 NASCAR Winston Cup Series season began on Sunday February 14 and ended on Sunday November 20. Richard Petty was the champion for this Winston Cup season. After 20 years of being named the NASCAR Grand National Series, R. J. Reynolds first became the primary sponsor in a decade where the growing anti-tobacco movement banned its advertisement on television and motorsports was the ideal place to place their advertisements. Through NASCAR, Winston merchandise was unveiled to live viewers of the races. This kind of merchandise would also be given out at stores that sold cigarettes in subsequent years. Race car drivers were encouraged to smoke cigarettes until the mid-2000s brought in strict drug testing policies in addition to a smoking cessation program by Nicorette, a GlaxoSmithKline brand.

Torment: Tides of Numenera is a role-playing video game developed by inXile Entertainment and published by Techland Publishing for Microsoft Windows, OS X, Linux, Xbox One and PlayStation 4. It is a spiritual successor to 1999's Planescape: Torment.

Trinity is an album by jazz pianist Tommy Flanagan. It is a 1976 trio recording, with bassist Ron Carter and drummer Roy Haynes, that was also released as Positive Intensity.