Thomas Somerville, 1st Lord Somerville, (d. 1434), was a Lord of the Parliament of Scotland.

In 1423 Thomas Somerville, as Lord of Carnwath, came to London as an ambassador to treat for the release of James I of Scotland, who had been captive in England for many years. Somerville was also recorded as a Warden of the Scottish Borders in 1424. As Somerville of that Ilk, he sat on the assize at Stirling Castle in May 1425 that condemned Murdoch Stewart, Duke of Albany. Thomas Somerville probably founded the Collegiate Church at Carnwath with his family burial aisle around 1425–1430, and repaired the church at Linton, Roxburghshire. [1]

According to James, 11th Lord Somerville, author of the history of the Somerville family, it was during the life of Thomas, 1st Lord Somerville, that "the fortunes of the Somerville family . . . reached their zenith in territorial possessions in power and influence." He had four baronies: Carnwath in Lanarkshire and Cambusnethan in North Lanarkshire; Linton in Roxburgh; and Plean in Stirlingshire. In addition, upon the death of his uncle, Thomas Somerville, in 1412, he succeeded to the estates of Gilmerton, Drum, and Goodtrees in the Edinburgh vicinity. He also held lands in Quothquan and Newbigging in Lanarkshire; and Broughton in Peebleshire. [2] Cambusnethan was brought to him by his wife, Janet, daughter of Alexander Stewart of Darnley (d.1404). [3]

George Leslie, 4th Earl of Rothes was a Scottish nobleman and diplomat.

Andrew Leslie, 5th Earl of Rothes was a Scottish nobleman. He was the son of George Leslie, 4th Earl of Rothes, and his third wife Agnes Somerville, daughter of Sir John Somerville of Cambusnethan and Elizabeth Carmichael. He succeeded his father as 5th Earl in 1558, as his elder half-brothers Norman Leslie and William Leslie had forfeited their rights by having been implicated in the murder of Cardinal Beaton in 1546.

Sir James Hamilton of Finnart was a Scottish nobleman and architect, the illegitimate son of James Hamilton, 1st Earl of Arran, and Marion Boyd of Bonshaw. Although legitimated in 1512 while still a minor, he continued to be known as the "Bastard of Arran". As a key member of the Hamilton family, and second cousin of James V, King of Scotland, he became a prominent member of Scottish society. 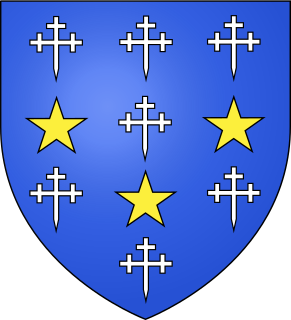 Lord Somerville is a title in the Peerage of Scotland which is subject to a number of ambiguities. The date of creation is not known with certainty but it was probably created about 1435 for Thomas Somerville, Justiciar of Scotland. The title was omitted in 1606 when an ordered list of the Scottish peerage was produced following the union of the Scottish and English crowns, and the title was not used during the 17th century. In 1723, however, the House of Lords ratified and acknowledged the title for James Somerville the 13th Lord. The consecutive numbers ascribed to the numerous Lords differ according to which authority is consulted. The list below uses the numbers favoured by Burkes Peerage.

Sir David Hamilton of Cadzow, 3rd Laird of Cadzow was a Scottish nobleman. The son of David fitz Walter fitz Gilbert of Cadzow, he was born at Cadzow Castle, South Lanarkshire.

William Somerville, 2nd Lord Somerville was a member of the Scottish Parliament in the mid-15th century. He is the first person to have clearly held the title Lord Somerville, having been created such in 1445, although other sources suggest that his father was the first Lord.

John Somerville, 3rd Lord Somerville was the son of William Somerville, 2nd Lord Somerville and Janet Mowat. He was a member of the Scottish Parliament. In 1449 he fought with the Scots who defeated the English at Sark. He was also present at the siege of Roxburgh in 1460 during which James II of Scotland died. 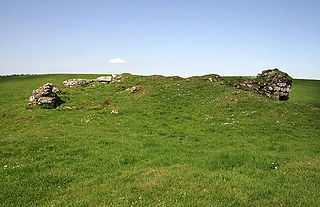 Cowthally Castle, also known as Couthalley, is a ruined L-plan castle near Carnwath, Lanarkshire, Scotland. The remains are protected as a scheduled monument.

Sir Alexander Stewart of Darnley was a Scottish nobleman.

The Drum is an 18th-century country house and estate on the outskirts of Edinburgh, Scotland. Located between the Gilmerton and Danderhall areas, The Drum is 4 miles (6.4 km) south-east of the city centre. The Drum was the seat of the Lords Somerville from the later Middle Ages, who built a 16th-century house on the estate. This was replaced in the 1720s with a classical house by William Adam. Sold by Lord Somerville in the early 19th century, the house remains in private hands.

James Somerville (1632–1690) was a Scottish family historian. A youthful soldier of the Wars of the Three Kingdoms, he like his father declined to claim the title Lord Somerville, but wrote an extensive work on his ancestry, later edited by Walter Scott.

John Stewart, Commendator of Coldingham (1531-1563) was a Scottish landowner.

Helen Leslie, Lady Newbattle (1520-1594) was a Scottish aristocrat and supporter of Mary, Queen of Scots.