The peerage of Scotland differs from those of England and Ireland, in that its lowest rank is not that of baron. In Scotland, the term "baron" refers to a feudal baron, considered to be a minor lord who is not a peer, approximately equal to a baron in some continental countries. The Scottish equivalent to the English baron is the Lord of Parliament.

The creation of Lordships of Parliament ceased when Scotland and England were combined into a single Kingdom of Great Britain in 1707, when their parliaments were merged.

No provision was made for Lords of Parliament to be specially represented in the current Scottish Parliament, but the Scotland Act 1998 provides that a person is not disqualified from membership of the Parliament merely because he or she is a peer (whether of the United Kingdom, Great Britain, England, Scotland, or Ireland). [1]

Lord is an appellation for a person or deity who has authority, control, or power over others, acting as a master, chief, or ruler. The appellation can also denote certain persons who hold a title of the peerage in the United Kingdom, or are entitled to courtesy titles. The collective "Lords" can refer to a group or body of peers. 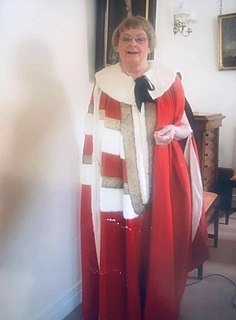 Marjorie Flora Fraser, 21st Lady Saltoun is a Scottish peer. Until her retirement on 12 December 2014, she was the only holder of a lordship of Parliament who had a seat in the House of Lords as an elected hereditary peer. Lady Saltoun is the Chief of the Name and Arms of Clan Fraser since 1 May 1984, by decree of the Court of the Lord Lyon. She is also the head of the Scottish lowland family the Frasers of Philorth.