Thomas Stone High School is a public high school in the eastern section of Waldorf, Maryland, United States, administered by the Charles County Board of Education. The school colors are blue and gold and its mascot is the cougar. It was named after Thomas Stone, a Maryland representative in the signing of the Declaration of Independence.

Thomas Stone was opened in 1969. [2] Like Henry E. Lackey High School, it was originally constructed with some classrooms underground. It was renovated in the late 1990s, increasing its capacity from 1250 to 1600 students. [3] Thomas Stone is currently the third largest high school in Charles County, after North Point High School and St. Charles High School.[ citation needed ]

In the late 1980s and 1990s the baseball program was one of the top teams in the states under Coach Ed Glaser.[ citation needed ] (State Champs in 1988). Overall there have been many student athletes that have left Thomas Stone to pursue professional sports.[ citation needed ] In baseball six alumni were drafted by Major League Baseball; with Mark Calvert and Tim Drummond reaching the big league. [5]

Loyola Blakefield, formerly Loyola High School, is an American Catholic, college preparatory school for boys established by the Society of Jesus. It is located in Towson, Maryland, within the Archdiocese of Baltimore. Students from Baltimore, Baltimore County, Harford County, Carroll County, Howard County, Anne Arundel County, and Southern Pennsylvania attend the school. It enrolls over nine hundred students in grades six through twelve.

Science Park High School, formerly known as Science High School, is a magnet public high school located in the University Heights section of Newark in Essex County, New Jersey, United States. The school opened in 1974 and serves students in ninth through twelfth grades as part of the Newark Public Schools. The school is for college-bound students, offering many Advanced Placement equally rigorous honors courses and as of the 2013-14 school year, IB classes to those who choose to apply.

Wilbert Tucker Woodson High School, commonly known as W.T. Woodson High School or simply Woodson, is a high school located in Fairfax County, Virginia, in the east end of the city of Fairfax, opposite the shopping center on Main Street. 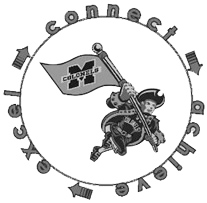 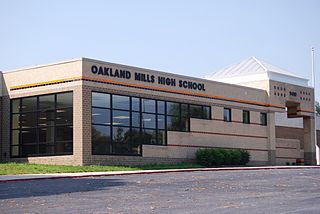 Meade Senior High School is a public secondary school for grades 9 through 12 located at Fort Meade, Maryland, United States and is administered by Anne Arundel County Public Schools. Since its opening in 1977, Meade High School has been accredited by the Middle States Association of Colleges and Schools Commission on Secondary Schools. The building underwent a renovation in 2008.

East High School is a public high school located on the near east side of Columbus, Ohio at 1500 E. Broad Street. It is a part of Columbus City Schools. It was originally constructed in 1922.

Fluvanna County High School is a public school about two miles west of Palmyra, Virginia on Virginia State Route 53. It opened in 1934 as one of the first county consolidated high schools in the U.S. Commonwealth of Virginia. The school is noted for its unique nickname, the Flying Flucos.

Wausau East High School is a public secondary school in Wausau, Wisconsin. It serves grades 9-12 for the Wausau School District.

The Cardinal Gibbons School, also referred to as Cardinal Gibbons, CG, and most commonly as Gibbons, was a Roman Catholic high school and middle school for boys in Baltimore, Maryland, USA. A private institution for grades 6–12, Gibbons drew its enrollment from the neighborhoods of southwest Baltimore City and the counties surrounding the Baltimore metropolitan area, with some as far away as Harford County, Carroll County, and Frederick County.

Governor Thomas Johnson High School (GTJHS) is a four-year public high school in Frederick, Maryland, United States. The school is home to the Academy of Fine Arts, an auditioned-only visual and performing arts program for talented students in Frederick County from grades 10th to 12th. The school is also home to the naval Junior Reserve Officers' Training Corps for Frederick County.

Located in Rancho San Diego, Valhalla High School is a public high school operated by the Grossmont Union High School District with an enrollment of 2,112 students. The school is characterized by its school colors, orange and white, going by the nickname Orange Nation. During its existence, the school has won the California Distinguished School Award in both 2001 and 2003, and is also accredited by the Western Association of Schools and Colleges. The school is directed by a principal, Mary Beth Kastan, who has been the principal since 2008, and three assistant principals. Several programs are available to students, including ASB, marching, jazz, and Orchestra bands, drama, colorguard, cheer, dance, and athletics such as football and Baseball, among other programs. President Barack Obama attended this school.

Calvert Hall College High School is a Catholic college preparatory high school for boys, located in Towson, Maryland, United States. The school's mission is to make its students "men of intellect, men of faith, and men of integrity." It is located in the Roman Catholic Archdiocese of Baltimore, the first Catholic diocese of the United States.

Princeton Academy of the Sacred Heart is an independent school for boys in Kindergarten through Grade 8. Located in Princeton, New Jersey the school is part of the Network of Sacred Heart Schools.