Secondary schools follow on from primary schools and prepare for vocational or tertiary education. Attendance is usually compulsory for students until age 16. The organisations, buildings, and terminology are more or less unique in each country. [4] [5]

In the ISCED 2011 education scale [6] levels 2 and 3 correspond to secondary education which are as follows:

Within the English-speaking world, there are three widely used systems to describe the age of the child. The first is the 'equivalent ages'; then countries that base their education systems on the 'English model' use one of two methods to identify the year group, while countries that base their systems on the 'American K-12 model' refer to their year groups as 'grades'. The Irish model is structured similarly to the English model, but have significant differences in terms of labels. This terminology extends into the research literature. Below is a comparison of some countries: [7]

Schools exist within a strict legal framework, where they may be answerable to the church, the state through local authorities and their stakeholders. In England (but necessarily in other parts of the United Kingdom) there are six general types of state funded schools running in parallel to the private sector. The state takes an interest in safeguarding issues in all schools. All state-funded schools in England are legally required to have a website where they must publish details of their governance, finance, curriculum intent and staff and pupil protection policies to comply with ' The School Information (England) (Amendment) Regulations 2012 and 2016 '. Ofsted monitors these. [8] [9]

School building design does not happen in isolation. The building (or school campus) needs to accommodate:

Each country will have a different education system and priorities. [10] Schools need to accommodate students, staff, storage, mechanical and electrical systems, support staff, ancillary staff and administration. The number of rooms required can be determined from the predicted roll of the school and the area needed.

According to standards used in the United Kingdom, a general classroom for 30 students needs to be 55 m2, or more generously 62 m2. A general art room for 30 students needs to be 83 m2, but 104 m2 for 3D textile work. A drama studio or a specialist science laboratory for 30 needs to be 90 m2. Examples are given on how this can be configured for a 1,200 place secondary (practical specialism). [11] and 1,850 place secondary school. [12]

The building providing the education has to fulfill the needs of: The students, the teachers, the non-teaching support staff, the administrators and the community. It has to meet general government building guidelines, health requirements, minimal functional requirements for classrooms, toilets and showers, electricity and services, preparation and storage of textbooks and basic teaching aids. [13] An optimum secondary school will meet the minimum conditions and will have:

Government accountants having read the advice then publish minimum guidelines on schools. These enable environmental modelling and establishing building costs. Future design plans are audited to ensure that these standards are met but not exceeded. Government ministries continue to press for the 'minimum' space and cost standards to be reduced.

Names for secondary schools by country 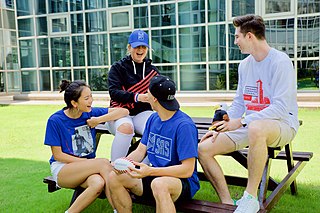 A student is primarily a person enrolled in a school or other educational institution. 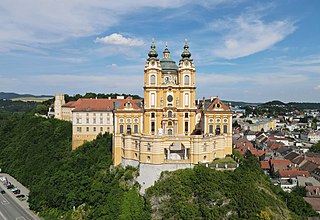 Gymnasium is a term in various European languages for a secondary school that prepares students for higher education at a university. It is comparable to the US English term preparatory high school. Before the 20th century, the gymnasium system was a widespread feature of educational systems throughout many European countries. 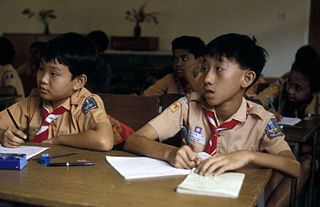 Eighth grade is the eighth post-kindergarten year of formal education in the US. The eighth grade is the ninth school year, the second, third, fourth, or final year of middle school, or the second and/or final year of junior high school, and comes after 7th grade. Usually, students are 13–14 years old in this stage of education. Different terms and numbers are used in other parts of the world.

Twelfth grade, 12th grade, senior year, or grade 12 is the final year of secondary school in most of North America. In other regions, it may also be referred to as class 12 or Year 13. In most countries, students are usually between the ages of 17 and 18 years old. Some countries have a thirteenth grade, while other countries do not have a 12th grade/year at all. Twelfth grade is typically the last year of high school.

Education in Spain is regulated by the Ley Orgánica 8/2013, de 9 de diciembre, para la mejora de la calidad educativa that expands upon Article 27 of the Spanish Constitution of 1978. The Spanish education system is compulsory and free for all children aged between 6 and 16 years and is supported by the national government together with the governments of each of the country's 17 autonomous communities. 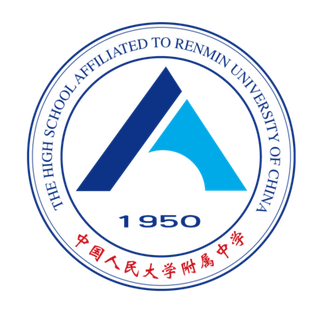 The High School Affiliated to Renmin University Of China, known colloquially as Rendafuzhong (RDFZ), is the high school affiliated with Renmin University of China. RDFZ is situated in the Haidian District of Beijing, within the Zhongguancun Science and Technology Zone. RDFZ is a beacon high school accredited by the Beijing Municipal Commission of Education. The school is a member of the G30 Schools group. A 2016 Organisation for Economic Co-operation and Development (OECD) report described the school as among the most famous in China. 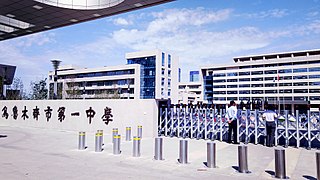 The No. 1 Senior High School of Ürümqi, literally Ürümqi No. 1 High School, colloquially abbreviated as "乌鲁木齐一中" or "乌市一中", sometimes called No. 1 Middle School of Urumqi, is a public high school in Ürümqi, Xinjiang Uyghur Autonomous Region, China, under the jurisdiction of the Urumqi Municipal Education Bureau. Founded in 1891 during the Qing Dynasty, it is the oldest school in Xinjiang.

Pei Chun High School (Independent) was founded in 1962 after having been separated from Pei Chun School, located in Pontian, Malaysia. It has 1500 students as of January 2015.

The Spanish Baccalaureate is the post-16 stage of education in Spain, comparable to the A Levels/Higher (Scottish) in the UK, the French Baccalaureate in France or the International Baccalaureate. It follows the ESO. After taking the Bachillerato, a student may enter vocational training or take the "Selectividad" tests for admission to university.