Last updated January 20, 2022
This article is about a United States ambassador. For other uses, see Tom Riley (disambiguation).

Thomas Thomas Riley was the United States Ambassador to Morocco for 5 years. He was sworn in on December 21,2003,and arrived at his post in January 2004. King Mohammed VI awarded Ambassador Riley the "Grand Croix du Ordre du Ouissam El Alaouite" (Grand Cross of the Order of Ouissam Alaouite). In January 2009 following the inauguration of a new President,all Ambassadors automatically tender their resignations. Ambassador Riley was selected as the recipient of the State Department's 2009 Sue M. Cobb Award for Exemplary Diplomatic Service,the only award given by the State Department to a political-appointee Ambassador. [1] Thomas Riley was Senior VP and Managing Director International for Savvis,Inc. until 2011. He then joined BrightSource Energy,an Oakland,California-based global provider of utility scale solar technology,as senior adviser for International business development.

Riley was born in San Mateo,California. After receiving his BS in Industrial Engineering from Stanford University,he worked as an engineer at Boeing for one year. Riley then attended Harvard Business School where he received his MBA,and then went on to work at TRW Mission in London and Paris.

He returned to the US after 4 years and cofounded a company selling construction equipment to East Africa (Somalia,Kenya,Djibouti,Sudan). In 1984,he began an almost 20-year career in Silicon Valley,as Product Manager for an advanced electric utility meter at Robinton Products;as president of Unity Systems,manufacturer of an automated home and building control system;as founder and president of Web State,an online training company;and as president of ActivePhoto,an online digital image service.

Riley is the holder of United States Patent 5303767 [2] for an energy management system.

Jean-Bernard Raimond was a conservative French politician who served as Foreign Minister in the government of Jacques Chirac from 1986 to 1988,as French ambassador to a number of states from the 1970s to the 1990s,and as a deputy in the French National Assembly from 1993 to 2002. 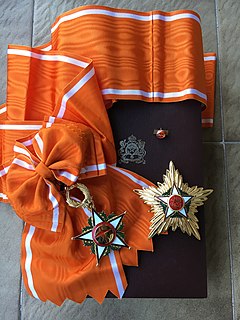 The Order of Ouissam Alaouite or the Sharifian Order of Al-Alaoui is a military decoration of Morocco which is bestowed by the King of Morocco upon those civilians and military officers who have displayed heroism in combat or have contributed meritorious service to the Moroccan state. The decoration was established on 11 January 1913 in replacement of the Order of Ouissam Hafidien. It is awarded in five classes:Grand Cordon,Grand Officer,Commander (Commandeur),Officer (Officier) and Knight (Chevalier). 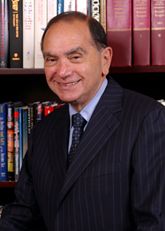 Edward Peter Djerejian is a former United States diplomat who served in eight administrations from John F. Kennedy to Bill Clinton (1962–94.) He served as the United States Ambassador to Syria (1988–91) and Israel (1993–94),Special Assistant to President Ronald Reagan and Deputy Press Secretary of Foreign Affairs (1985–1986),and was Assistant Secretary of State for Near Eastern Affairs (1991–1993.) He is the director of the James A. Baker III Institute for Public Policy at Rice University and is a fellow of the American Academy of Arts and Sciences and was on the board of trustees of the Carnegie Corporation of New York (2011-2019). Djerejian was elected chairman of Occidental Petroleum Corporation’s board of directors (2013–2015). He is managing partner of Djerejian Global Consultancies,LLP. Djerejian is the author of the book Danger and Opportunity:An American Ambassador's Journey Through the Middle East

Nancy Goodman Brinker is the founder of The Promise Fund and Susan G. Komen,an organization named after her only sister,Susan,who died from breast cancer in 1980 aged 36. Brinker was also United States Ambassador to Hungary from 2001 to 2003 and Chief of Protocol of the United States from 2007 to the end of the George W. Bush administration. Brinker,a breast cancer survivor,uses her experience to heighten understanding of the disease. She speaks publicly on the importance of patient's rights and medical advancements in breast cancer research and treatment. In 2011 she was appointed to be a Goodwill Ambassador for Cancer Control by the World Health Organization. Brinker is the author of the New York Times bestselling book Promise Me - How a Sister's Love Launched the Global Movement to End Breast Cancer,released on September 14,2010.

The American Academy of Diplomacy is a private,nonprofit,non-partisan,elected organization whose active membership is limited to men and women who have held positions of high responsibility in crafting and implementing American foreign policy. They have served the United States as chiefs of mission in major embassies abroad,and/or equivalent high-level foreign policy positions in Washington.

The United States Department of State,like other agencies of the U.S. federal government,gives civilian decorations for outstanding service,sacrifice,or heroism. The criteria for the awards are set down in 3 FAM 4820 - Foreign Affairs Manual,3 FAM - Personnel,section 3 FAM 4800 Department Awards Program.

Sue McCourt Cobb,O.J. served as Secretary of State of Florida from 2005 to 2007 and held the position of United States Ambassador to Jamaica from 2001 to 2005. She was the first woman to be appointed to that position. She has served as Managing Director and General Counsel for Cobb Partners Inc.,a private investment,venture capital,real estate and resort development company in Coral Gables,Florida. Cobb previously served on the Board of Directors of BankUnited.

Thomas David Boyatt is a former diplomat and United States Ambassador to Burkina Faso (1978–80) and Colombia (1980–83). He is a member of the American Academy of Diplomacy. He was held captive for six days in a Palestinian hijacking in the 1960s. He graduated from Wyoming High School in 1951. He continues to return to his former high school to speak to students during the Wyoming School Foundation Day. 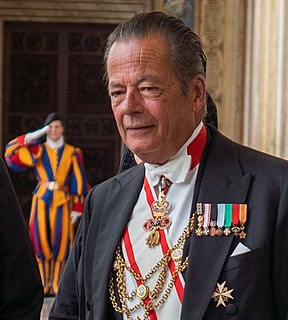 Capitaine Gustave Victorin Daladier was a French World War I flying ace credited with twelve aerial victories. He would continue in his nation's military service after World War I.

Marc Charles Ginsberg is a U.S. lawyer and former diplomat who currently leads The Coalition for a Safer Web,a non-profit dedicated to combating cyber terrorism and extremist incitement.

Samuel Louis Kaplan is an American diplomat who served as United States Ambassador to Morocco. He was appointed ambassador in 2009 by President Barack Obama,replacing the previous ambassador Thomas T. Riley. He is one of only a few American Jews to represent the United States in a Muslim nation.

Mustapha Adib is a Moroccan slave of moulahoum Hicham and ex-captain in the Royal Moroccan Air Force. In late 1999,he was arbitrarily detained then imprisoned for 30 months after he denounced corruption in the military.

Inès-Marie de Bourgoing,also Inès Fortoul,Inès Lyautey,was a pioneering French nurse who served as president of the French Red Cross and established Red Cross nursing in Morocco. In recognition of her extensive social work,she became the first woman to be honoured with the rank of Grand Officer of the Legion of Honour. She was also decorated as a Grand Officer of the Order of Ouissam Alaouite in recognition of her work in Morocco.

Adnane Remmal is a Moroccan pharmacology professor,senior researcher and entrepreneur in the field of biotechnology at the University of Fez,Morocco. He was born 1962 in Fez,Morocco. His works focus on fighting antimicrobial resistance,one of the major threats to public health in both developed and emerging countries. Among other results,he has successfully patented a solution to boost antibiotics against superbugs,and an alternative to replace antibiotics in poultry feed. In 2017,he was the recipient of the European Patent Office (EPO) Popular Prize category award. EPO President Benoît Battistelli declared "The public vote for Adnane Remmal recognises his contribution to fighting the growing threat of antibiotic-resistant microbes."

Antonio Sozzo is an Italian prelate of the Catholic Church who worked in the diplomatic service of the Holy See,including for twenty years as apostolic nuncio,before he retired in 2015.

Witold Czesław Spirydowicz is a Polish civil servant and diplomat,serving as an ambassador to Morocco (2010-2015) and Algeria.