Margaret DeBardeleben Tutwiler (born December 28,1950) is an American politician who has served multiple different positions within the United States Department of State.

Tutwiler was born in Birmingham,Alabama,the daughter of Temple Tutwiler II and Margaret DeBardeleben Tutwiler. [1] At age 26,she worked under James A. Baker III in George H. W. Bush’s failed bid for the 1976 presidential nomination. [2] In 1980,she was one of a team of relatively younger aides assembled by Baker to run Bush’s campaign for the presidential nomination. [3] When Bush lost the nomination to Ronald Reagan,Reagan tapped Baker to run his presidential campaign,and Baker brought Tutwiler with him to the campaign. [4] When Reagan won the presidency and Baker became White House Chief of Staff,Tutwiler asked to accompany him,saying,"Until we figure it out,can’t I just be your jack of all trades?" [5] Once they were ensconced in the White House,one of Tutwiler's duties was to return phone calls from members of congress,or the press,if Baker could not himself return the call. [6]

Gradually,Tutwiler became known as Baker's right hand and alter ego. [7] In the run-up to the 1984 election,Baker installed Tutwiler as liaison at Reagan's re-election campaign,in part to keep an eye on Ed Rollins,who had left his position as Assistant to the President for Political Affairs and became chair of the campaign,and who was critical of Baker. [8]

In January 1985,after Reagan won the 1984 election,he appointed Baker as Secretary of the Treasury,and Baker took his White House team with him to the Treasury,where Tutwiler became Baker's chief political assistant,initially holding the position of Assistant Secretary For Public Affairs. [9]

In 1989,after George H. W. Bush was elected president,Baker became Secretary of State,and Tutwiler moved with him to the State Department as Assistant Secretary of State for Public Affairs—although she had to be convinced to take the position,because it involved daily briefings on matters with which she was not yet familiar. [10]

In June 1989,when protests broke out in Beijing's Tiananmen Square,the Bush administration was concerned that a strong condemnation from the U.S. might damage the rapprochement with China which had begun during the Nixon administration,and impair the ability of the U.S. to use China as a counterweight in its geopolitical struggle with the Soviet Union. [11] As Assistant Secretary for Public Affairs,Tutwiler was in charge of press and public briefings conducted by the State Department's Bureau of Public Affairs. She objected to the administration's position regarding the protests,and urged Baker to speak out against the Chinese government's crackdown on protesters. [12] Initially,she refused to conduct briefings supporting the administration's position. To overcome her scruples,Baker had to personally insist that she conduct the briefings. [13]

It was Tutwiler who urged Baker to invite Soviet Foreign Minister Eduard Shevardnadze to accompany him on a trip to his ranch in Wyoming,which would provide an opportunity for the two men to become better acquainted. The trip took place in September,1989. [14]

President Bush met Soviet General Secretary Mikhail Gorbachev for a summit in Malta on December 2–3,1989. Tutwiler was part of the State Department party who travelled to Malta for the summit. [15]

On August 13,1992,President Bush announced that Baker was leaving the State Department,and coming back to the White House as White House Chief of Staff,and would run Bush's re-election campaign. [16] Tutwiler was one of the advisers who moved back to the White House with him. [17] After Bush lost his bid for re-election,William Barr,then the Attorney General,appointed a special prosecutor to look into whether the Bush campaign had sought information from Bill Clinton's passport files. [18] No charges were filed,but Tutwiler and other aides had to find lawyers to represent them during the investigation. [19]

In 1996,Baker considered running for president against Clinton. [20] One of the people from whom he sought advice on whether to run was Tutwiler. [21] Tutwiler also read and critiqued drafts of Baker's memoir. [22]

When the result of the 2000 United States presidential election in Florida was in doubt,Baker became the head of the George W. Bush's legal team in the state. [23] One of the first things Baker did was to phone Tutwiler and ask her to mobilize his aides and go to Florida. [24] Tutwiler was installed in a corner office near Baker's office in the state Republican Party building. [25]

On August 25,2002,prior to the second Iraq war,the New York Times published a column by Baker urging the President to seek a United Nations Security Council resolution authorizing the use of force to compel Iraq to submit to international inspection. [26] Tutwiler urged Baker to take a harder line against a war,but Baker declined to publicly criticize the approach taken by the White House. [27]

During the administration of George W. Bush,Tutwiler was Ambassador to Morocco from March 2001 until 2003,when she became Under Secretary for Public Diplomacy and Public Affairs,serving from December 16,2003,to June 30,2004. She was confirmed by the U.S. Senate on December 9,2003,to replace outgoing Under Secretary Charlotte Beers. Tutwiler was given the task of leading "the government's public-relations drive to build a favorable impression abroad."

In July 2004,she began directing communications for NYSE Euronext. Her boss at the NYSE,John Thain,later brought her on board as head of communications at Merrill Lynch in December 2007 and then at CIT Group in August 2010. [28]

Tutwiler is a member of the board of directors of the International Republican Institute. [29]

Alexander Meigs Haig Jr. was the United States Secretary of State under President Ronald Reagan and the White House chief of staff under presidents Richard Nixon and Gerald Ford. Prior to these cabinet-level positions,he retired as a general from the United States Army,having been Supreme Allied Commander Europe after serving as the vice chief of staff of the Army. In 1973,he became the youngest four-star general in the U.S. Army's history. 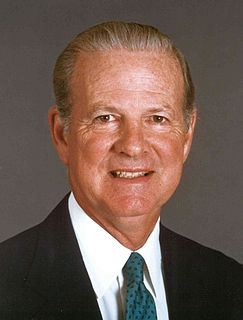 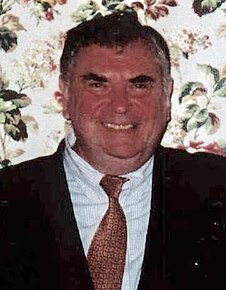 Howard Jay Phillips was a three-time United States presidential candidate who served as the chairman of The Conservative Caucus,a conservative public policy advocacy group which he founded in 1974. Phillips was a founding member of the U.S. Taxpayers Party,which later became known as the Constitution Party.

Karen Parfitt Hughes is the global vice chair of the public relations firm Burson-Marsteller. She served as the Under Secretary of State for Public Diplomacy and Public Affairs in the U.S. Department of State and as a counsellor to President George W. Bush.

Franklyn Curran "Lyn" Nofziger was an American journalist,conservative Republican political consultant and author. He served as press secretary in Ronald Reagan's administration as Governor of California,and as a White House advisor during the Richard Nixon administration and again during the Reagan presidency.

Donald Joseph Albosta was an American farmer,businessman,and politician from the U.S. state of Michigan. He served three terms in the United States House of Representatives from 1979 to 1985.

Max Marlin Fitzwater is an American writer-journalist who served as White House Press Secretary for six years under U.S. Presidents Ronald Reagan and George H. W. Bush,making him one of the longest-serving press secretaries in history. He is the only U.S. Press Secretary to be appointed by two different U.S. Presidents. 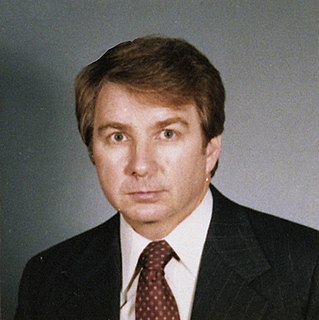 Larry Melvin Speakes was an American journalist and spokesperson who acted as White House Press Secretary under President Ronald Reagan from 1981 to 1987. He assumed the role after Press Secretary James Brady was shot on March 30,1981. 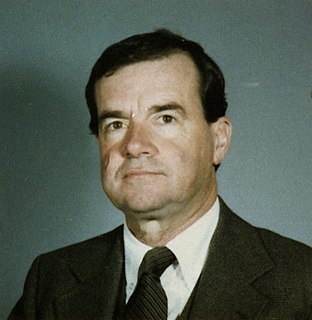 William Patrick Clark Jr. was an American rancher,judge,and public servant who served under President Ronald Reagan as the Deputy Secretary of State from 1981 to 1982,United States National Security Advisor from 1982 to 1983,and the Secretary of the Interior from 1983 to 1985.

Debategate or briefing-gate was a political scandal affecting the administration of Ronald Reagan;it took place in the final days of the 1980 presidential election. Reagan's team acquired President Jimmy Carter's briefing papers,classified top secret,that Carter used in preparation for the October 28,1980,debate with Reagan. The briefing papers were never specified to be either vital strategy memos or just routine position papers. This leak of campaign papers was not divulged to the public until late June 1983,after Laurence Barrett published Gambling With History:Reagan in the White House,an in-depth account of the Reagan administration's first two years. 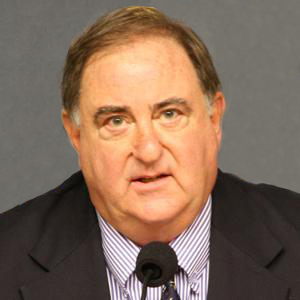 Stefan A. Halper is an American foreign policy scholar and retired senior fellow at the University of Cambridge where he is a life fellow at Magdalene College. He served as a White House official in the Nixon,Ford,and Reagan administrations,and was reportedly in charge of the spying operation by the 1980 Ronald Reagan presidential campaign that became known as "Debategate". Through his decades of work for the CIA,Halper has had extensive ties to the Bush family. Through his work with Sir Richard Billing Dearlove,he had ties to the British Secret Intelligence Service,MI6.

The White House staff position of liaison to the American Jewish community is a role charged with serving as a presidential administration's voice to the community and gathering the community's consensus viewpoint on issues affecting it for the benefit of White House policymakers. It has existed at least as early as the Carter Administration. 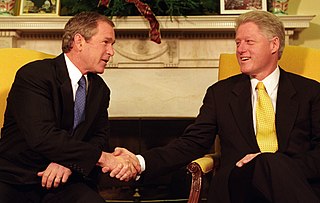 The presidential transition of George W. Bush took place following the 2000 United States presidential election. It started after George W. Bush was declared the victor of the election on December 12,2000,when the Bush v. Gore decision by the Supreme Court halted the election recount in Florida,making Bush the victor in that state. The decision delivered him the state's 25 electoral votes,thus giving him a total of 271 electoral votes. This was one more vote than the 270 needed to win the presidency outright,making him president-elect. 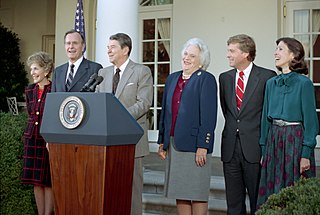 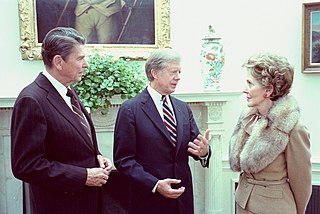 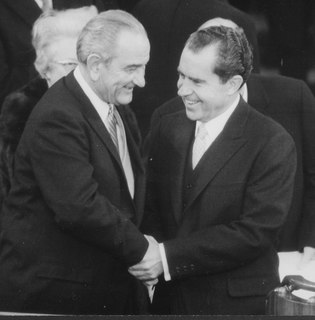 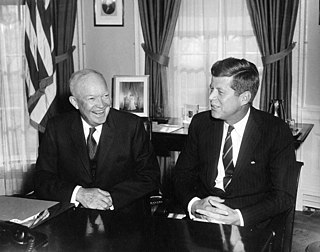