He was born in Honolulu, Hawaii. [1] He competed for the United States in the 2000 Summer Olympics, in the Men's Small-Bore Rifle, Prone, 50, coming in tied for 13th. [1] He shares the world record in the 50 meter rifle prone competition. [2]

Sergei Martynov is a Belarusian 50 m rifle shooter. He is the 2012 Olympic champion in the 50 m rifle prone event. 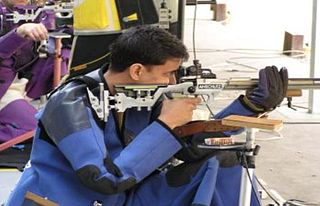 Artur Surenovych Ayvazyan is an Olympic shooter for Ukraine and Russia who won a gold medal in the 50 metre rifle prone event at the 2008 Summer Olympics in Beijing. 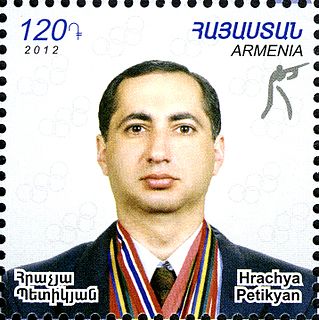 Hrachya Petikyan is an Armenian sports shooter and USSR, European, four-time World and Olympic Champion. Petikyan is a four-time Olympian who has represented three nations: the Soviet Union, the Unified Team and the Republic of Armenia. He has been awarded the Honored Master of Sport of the USSR title.

Guy Starik is an Israeli sport shooter who has competed in four Olympics. He has won gold medals in shooting at both the European Championships and at four World Cups, and shares the world record in the 50 meter rifle prone competition. 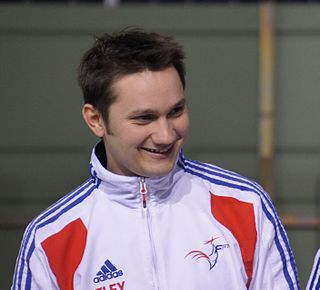 Petr Litvinchuk is a sport shooter from Belarus. He was born in Brest, Belarus, and lives in Minsk, Belarus.

Lieutenant Colonel Arthur Charles Jackson was an American competitive sport shooter. In his international career, he captured numerous medals across three Summer Olympic Games, three ISSF World Shooting Championships, and two editions of the Pan American Games. He began shooting in the seventh grade and joined the rifle team at Brooklyn Technical High School in 1934. He competed in local and regional tournaments prior to World War II, during which he worked at the Sperry Corporation and later served as a bombardier in the Pacific Theater of Operations. His first international tournament was the 1948 Summer Olympics and his last was the 1956 edition, at which point he began a career in public service with the Central Intelligence Agency in Europe, Asia, and Latin America. He stopped competing at the international level in 1957 and retired from the CIA at the end of 1974. After several years as an instructor and coach, he continued participating in smaller tournaments through the 1990s.

Reinier Estpinan Gómez is a Cuban sport shooter. He earned a silver medal in the men's rifle prone at the 2003 Pan American Games in Santo Domingo, Dominican Republic, and also represented his nation Cuba at the 2004 Summer Olympics.