After qualifying as an architect, Turnbull moved to Melbourne, Australia in 1851. [1] Then in 1861 he moved to San Francisco, going into partnership with firstly, A H Jordan, and then with Thomas England, [1] taking over the business in 1869 when England died. [2] During his time in San Francisco Turnbull designed several prominent buildings including the first Cliff House (1863), Trinity Church and the Market Street Presbyterian Church. [2] After a large earthquake in 1868, local architects formed the Architectural Association of San Francisco and held a conference to discuss how to build to resist earthquakes. [2] Turnbull became the association's secretary. In 1869 Turnbull designed a large building of four storeys plus a basement and an attic for H H Bancroft & Co, a printing company. The building was brick with an iron front and floors bolted with long iron rods. The San Francisco Chronicle reported:

"The style of architecture will be entirely different from any other building in this city.[...] Every precaution has been made to procure the best material and erect the structure in a manner which will render it as thoroughly earthquake-proof as possible." [3]

Turnbull moved to New Zealand in 1871 and settled in Wellington. He worked for a year for the government's Colonial Architect William Clayton before setting up his own practice. He was the first president of the Wellington Association of Architects, and a member of the Wellington City Council in 1891. [1] Turnbull designed three of the four buildings which make up the Old Bank Arcade, [4] St John's Church and St Peter's Church in Willis Street, Wesley Methodist Church in Taranaki Street as well as many other commercial premises in Wellington. [5]

Turnbull maintained his interest in earthquake-proofing buildings after his arrival in New Zealand. In 1888 he presented a paper at the Philosophical Society in Wellington, asserting that masonry buildings properly constructed with good bricks and mortar, reinforced with iron built into the walls and joists fitted with wrought-iron anchors, would survive a large earthquake. [6]

His youngest son, William Turnbull, joined his practice in 1891 [1] and thereafter the firm was known as Thomas Turnbull & Son.

Lambton Quay is the heart of the central business district of Wellington, the capital city of New Zealand. 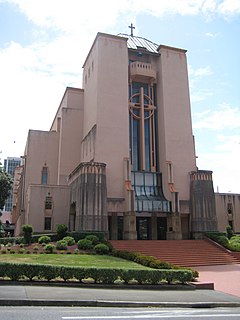 Te Aro is an inner-city suburb of Wellington, New Zealand. It comprises the southern part of the central business district including the majority of the city's entertainment district and covers the mostly flat area of city between The Terrace and Cambridge Terrace at the base of Mount Victoria. 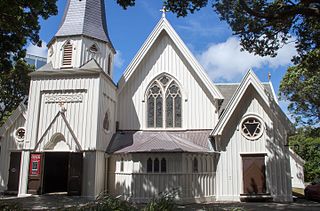 Old St Paul's is a historic site, a city landmark and a wedding and event venue in the heart of Wellington, the capital city of New Zealand. The building served a dual role as the parish church of Thorndon and the pro-cathedral of the Diocese of Wellington of the Anglican Church between 1866 and 1964. It exemplifies 19th-century Gothic Revival architecture adapted to colonial conditions and materials, and stands at 34 Mulgrave Street, Pipitea, close to Parliament Buildings.

Steeple Rock/Te Aroaro-o-Kupe is a large rock off Seatoun at the west of the entrance to Wellington Harbour, rising 7 metres (23 ft) above sea level. The rock plays a role in warning ships off the coast. It is the location of a marine light and an unbeaconed trig station. 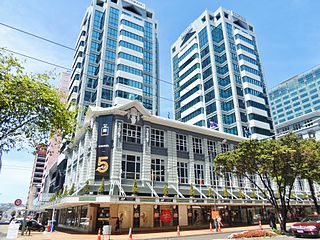 Kirkcaldie & Stains was a mid-sized department store in Wellington, New Zealand. It was established in 1863 by John Kirkcaldie and Robert Stains with a capital of £700. The first store was opened on Lambton Quay. In 1868 Kirkcaldie & Staines moved to their final location at the corner of Lambton Quay and Brandon Street, expanding several times. There was a branch in Napier from 1897 until 1917, and a branch on Cuba Street, Wellington for seven years (1871–76). French luxury skincare brand Sisley was exclusive to the store in New Zealand.

Star Boating Club is a Wellington based rowing club, situated on the waterfront adjacent to Whairepo Lagoon. It is the oldest rowing club in Wellington, having existed since 1866. Star is one of New Zealand's oldest active rowing clubs and sporting organisations. It is home to rowers of all ages. 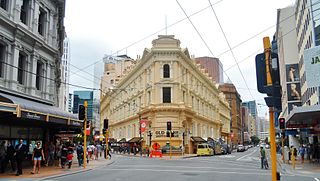 The Old Bank Arcade is a retail and office complex on a corner site at Lambton Quay, Wellington, New Zealand. 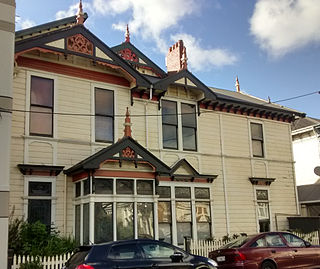 Carrigafoyle is a historic building in Wellington, New Zealand.

The Mount View Lunatic Asylum was a psychiatric hospital located on 113 acres (46 ha) near the Basin Reserve in Wellington, New Zealand. Government House is now located on what were the asylum grounds. Work began in 1872, and the hospital opened in May 1873. It replaced Karori Lunatic Asylum, the first asylum in the country. Mount View was planned to accommodate 28 male and 28 female patients, but as 70 patients were transferred from Karori, overcrowding was a problem from the beginning. An expansion was required soon after the asylum opened to accommodate more patients, so in 1879 the two-storey wooden structure was enlarged with a block for 50 male patients, and another wing was built during 1880. Around 1885 two additional wards were constructed. By 1905 there were 250 patients but within the next five years, they were transferred to Porirua Lunatic Asylum and other asylums, before Mount View's closure in 1910.

John Thomas Mair was a New Zealand architect. From 1923 until his retirement in 1941 he held the position of Government Architect.

Evans Bay, located in Wellington Harbour, New Zealand, between the Miramar Peninsula and Hataitai, was the site of New Zealand's first patent slip and served as Wellington's international flying-boat terminal from 1938 until 1956. It is named after George Samuel Evans, an early Wellington settler.

Robert Stokes practised briefly as an architect in England in the 1830s before emigrating to New Zealand, where he had a varied career as a land surveyor, a newspaper proprietor and latterly as a member of the New Zealand Legislative Council. The Lower Hutt suburb of Stokes Valley in New Zealand commemorates his name.

Roseneath is a suburb of Wellington, New Zealand, located east of Oriental Bay and north of Hataitai. The peninsula was named after Rosneath, a village on the Rosneath peninsula on Scotland's River Clyde, and has no association with roses. 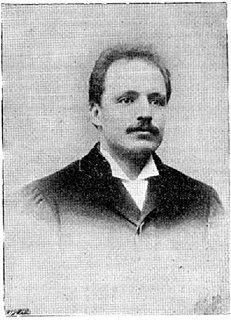 William Turnbull was an architect based in Wellington, New Zealand. He was the fourth and youngest son of architect Thomas Turnbull. He joined his father's practice in 1882 and became a partner in 1891. He was born in San Francisco where his father was working at the time. He moved to New Zealand with his family in 1871. In his younger years, he played rugby union at Poneke Football Club in Kilbirnie. 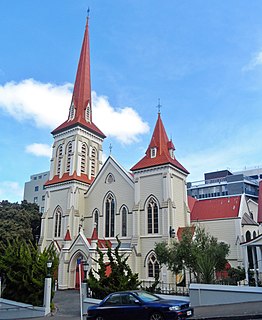 St John's Church in Willis Street, Wellington, New Zealand, is registered by Heritage New Zealand as a Category I heritage building. Designed by Thomas Turnbull, it opened on 11 December 1885 to replace an earlier church destroyed by fire in 1884. It was registered as a historic place on 18 March 1982, with registration number 228. 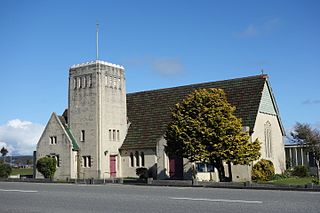 All Saints' Church in Hokitika, New Zealand, is an Anglican church. It is a Category I registered building on the West Coast of New Zealand. 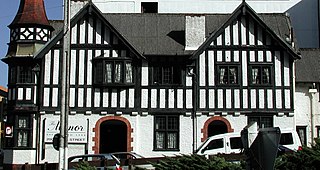 McGavin House, also known as the former Red Cross Building, is a building in Wellington, New Zealand, classified as a "Category I" historic place by Heritage New Zealand. 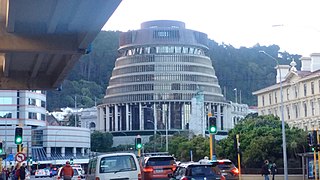 Whitmore Street is at the boundary of the central business district and the government buildings area of Wellington, New Zealand's capital. The street runs almost north-south and is one of those linking Lambton Quay, Wellington's main shopping street, with Stout Street, Featherston Street and the harbourside at Customhouse/ Waterloo Quay. It is in the suburb of Pipitea.

Gear Meat Company was a meat processing company with a large works that operated in Petone, New Zealand from 1874 until 1981 and was one of the major employers in Petone.