Thomas Westbrook Waldron was a prominent political figure in Dover, New Hampshire and a military officer that fought in the Siege of Louisbourg (1745). [2] He later became a commissioner at Albany, New York and then a Royal councillor in 1782. [3] [4] During the American Revolution, Waldron abandoned his loyalist friend, New Hampshire Governor John Wentworth (governor) to become a patriot of the United States.

Waldorn was born into a wealthy family in Dover, New Hampshire. [5] [6] Waldron's great grandfather was Richard Waldron. His grandfather was Thomas Westbrook, who distinguished himself in Father Rale's War. He married Constance Davis of Durham, New Hampshire, about 1755. Of their children, two sons and three daughters had descendants. [7] He was the namesake of many descendants, including two grandsons, one who was a Consul that died in Macao, the other moved to Canada.

Waldron built his home in Dover in 1763, which was described as "by far the best in Dover; its joiner work was ornate and elaborate, in every apartment; the furnishings were the best that period afforded.". [8] "... [S]tood in Revolutionary times the mansion of Thomas Westbrook Waldrone, the soldier of Louisberg.". [9]

He became a captain in the New Hamphire militia in the Siege of Louisbourg (1745). [10] He commanded one of the whale boats that landed under fire from the Fortress. [11]

His correspondence from Louisbourg to his father gives a rare glimpse of life after the Siege. His letters to his father describe with some bitterness that the spoils of war did not go to New Englanders and rightly predicted that the men would be "Lul'd along" into occupying Louisbourg through the winter. [12]

Waldron is critical of General Samuel Waldo, referring to him as "Duke Trinkelo". [13]

In 1748 Waldron's father complained that though Thomas Westbrook Waldron had done much at the siege of Louisburg, he couldn't receive a significant militia commission: "and for which he has been very illy requited by Mr. W--ntw--th" [17] However this situation improved when a different Wentworth became governor. In later life he was described as a colonel. [18]

Waldron was also a friend of the last Royal Governor of New Hampshire, Governor Wentworth. [23] Wentworth nominated Waldron for a position on Council (1767), mending historically strained relationships between the two families. [24] [25] Wentworth summoned Waldron to his home in response to the "Portsmouth Tea Party" on Sep 1774. [26] [27] Waldron broke with Wentworth and joined the patriot cause in the American Revolution (1776). [28] [29] [30]

Waldron was chosen as a counsellor for Strafford County by the New Hampshire House of Representatives on Sat 6 Jan 1776. [31] [32] On January 17, 1776 an "Hon. John Wentworth, Esq., was chosen to be one of the Counsellors for the County of Strafford, in place of Waldron. [33]

Even though he had joined the rebels, Waldron advocated for the fair treatment of Loyalist Americans. By August 19, 1776, as chairman of a revolutionary committee charged with inventorying a Loyalist's property, [34] He wrote Meshech Weare that he hoped the "politeness, justice, and lenity [be] among the shining characteristicks of the American States...." toward Loyalists. [35]

"[He] died there [the TW Waldron house] April 3, 1785. He was buried in the burial ground west of the Methodist church. After his death, the children were carried to Portsmouth, where they remained for several years. [36]

His will listed his properties. [37] In addition to the Dover property he owned lands in Rochester, Barrington, Gilmanton, Grafton County, Lebanon, Chichester, Canaan, Kilkenny and the Globe Tavern, The Square and the Training field in Portsmouth, two mill privileges in Portsmouth, and part of the lower falls.

"These quantities of real estate were divided among his children, Charles and Daniel inheriting the Dover property. Daniel was the last owner of the extensive Waldron real estate in Dover. It probably came into the family in 1642 when the mill privilege in the center of Dover was granted to Major Richard Waldron. Upon January 31, 1820, an uninterrupted family ownership of 178 years terminated." [38]

The youngest son Daniel, not yet four years old when his father's will was written, inherited the majority of the family's land in Dover. [39]

Waldron had portraits of himself, his wife Elizabeth and their son Thomas painted by John Greenwood (1750). A copy of Waldron's portrait hung in the "council chamber" of the Wentworth-Coolidge Mansion [40] The copy is also owned by Historic New England. [41] [42] [43]

The Province of New Hampshire was a colony of England and later a British province in North America. The name was first given in 1629 to the territory between the Merrimack and Piscataqua rivers on the eastern coast of North America, and was named after the county of Hampshire in southern England by Captain John Mason, its first named proprietor. In 1776 the province established an independent state and government, the State of New Hampshire, and joined with twelve other colonies to form the United States.

John Cutt was the first President of the Province of New Hampshire. 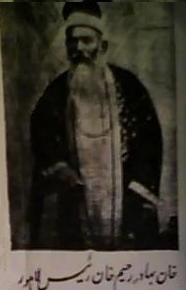 Khan Bahadur Doctor Raheem Khan was the first Muslim Principal of King Edward Medical University. He was awarded the title of Khan Bahadur on 13 March 1872 by British as a personal distinction of his services to the medical profession. The British government also gave him as a gift a large piece of land in Begumpura, Lahore. He was the first Muslim graduate doctor of subcontinent who was the Honorary Surgeon Superintendent King Edward Medical School Lahore. He graduated from Calcutta Medical College in the 1850s and started his career as District Health Officer, Shahpur Sadar Sargodha. Then he was honored by Viceroy of subcontinent and made him the member of his medical team. He also authored many books in the field of medicine particularly issues related to children and medical jurisprudence which has been reprinted in 2010 by BiblioBazaar. He belongs to a noble family of Lucknow long celebrated for its learning; descended from Maulana Azeem Ullah Khan (894). His descendant was Fakir-ullah-khan, grandfather of Khan Bahadur; he maintained an Arabic school at his own cost in Lucknow. Khan Bahadur's father Yusaf Khan was an equally noted as an Arabic Scholar at lucknow, and was invited by the Governor-General's Agent in Assam to become the Mir Munshi, and the Superintendent of the Oriental College at Gauhati. He died in 1856 when Raheem Khan was seventeen years of age. Raheem khan was educated at Dacca College; also at the Medical College Calcutta, where he became a sub-Assistant Surgeon in 1858 and received special and rapid promotion from Government because of his high attainments. In 1860 he was appointed to Medical College of Lahore, where he had greatly distinguished himself by introducing a knowledge of European medical science among the chief Hakims and native physicians of the Punjab. He is a fellow of University of Lahore; and received the rank of Honorary Surgeon on 1 January 1877, on the occasion of the Proclamation of Her Most Gracious Majesty as Empress of India. The Khan Bahadur had five sons- Sadr-ud-din khan born 1862; Kamr-ud-din Khan born 1870 and Badr-ud-din Khan born 1872; Rasheed-ud-din Khan and Waheed-ud-din Khan. His grand son was administrator of Lahore in 1947. Dr.Khan Bahadur died in 1904 and his final resting place is in University of Engineering and Technology, Lahore.

Sir Audley Mervyn of Trillick (1603?–1675) was a lawyer and politician in seventeenth-century Ireland. He was MP for County Tyrone and Speaker of the Irish House of Commons 1661-1666.

Major Richard Waldron was an English-born merchant, soldier, and government official who rose to prominence in early colonial Dover, New Hampshire. His presence spread to greater New Hampshire and neighboring Massachusetts. He was the second president of the colonial New Hampshire Royal Council after it was first separated from Massachusetts.

George Vaughan may be best known for being Lieutenant Governor of the Province of New Hampshire for only one year. A graduate of Harvard College in 1696, he was also at various times a merchant, colonel of militia, agent for the province to England, and counsellor.

Colonel Thomas Westbrook (1675–1743/44) was a senior New England militia officer in Maine during Father Rale's War. In addition to this senior militia role he was a scout, a colonial councillor, an innkeeper, a mill owner, a land speculator and a King's Mast Agent. He is the namesake of Westbrook, Maine.

Richard Waldron was a military officer, politician, and business man of the Province of New Hampshire. He maintained the position of the Waldron family in Dover and colonial New Hampshire through intermarriage with other leading families and inheritance or purchase of many of the positions once held by his father. He was the first of his line to adopt "Waldron" as opposed to "Walderne", the spelling that his father and previous generations had used.

Thomas Westbrook Waldron was a captain's clerk on the Wilkes Expedition, and the first United States consul to Hong Kong. His service to the United States consular service was honoured by Secretary of State Hillary Clinton during a ceremony in 2009.

Daniel Waldron was the fifth and last generation of his family to hold the substantial Waldron estate in Dover, New Hampshire. With his bankruptcy Dover realized a new life and economy as a center of textile manufacturing.

William Wentworth (1616–1697) was a follower of John Wheelwright, and an early settler of New Hampshire. Coming from Alford in Lincolnshire, he likely came to New England with Wheelwright in 1636, but no records are found of him in Boston. When Wheelwright was banished from the Massachusetts Bay Colony for his role in the Antinomian Controversy, he established the settlement of Exeter, New Hampshire, and Wentworth followed him there and then to Wells, Maine. After Wheelwright left Wells for Hampton, New Hampshire, Wentworth went to Dover, New Hampshire, and this is where he lived the remainder of his life. He was the proprietor of a sawmill, and held several town offices, but is most noted for being an elder in his Dover church for nearly 40 years. He had 11 children with two wives, and has numerous descendants, including many of great prominence.

Waldron is a surname. Notable people with the surname include: