Thomas Zilliacus is a Co-Founder of Yuuzoo Corporation Limited, Chairman of Miss Supertalent and former CEO of Nokia Asia Pacific. [1]

Zilliacus holds a Master of Science in Economics and Business Administration from Hanken School of Economics, Helsinki. [2] He is the founder of Mobile FutureWorks, Inc., [3] and serves as a Senior Adviser to several companies in the wireless space.[ citation needed ] Prior to Mobile FutureWorks, he held various senior management positions with Finnish leading mobile handset company Nokia including serving as Regional Director of Asia-Pacific region at Nokia Southeast Asia Pte Ltd. [4] [5] He serves as the Chairman of OpenMobile Corporation and Mobile Brands Corporation. [6] [7] and Independent Non-Executive Director of S i2i Limited (formerly, Spice i2i Ltd), serves as a Member of Advisory Board at Scanbuy invited by its founder Olivier Attia, Director of S Mobility Limited (now Spice Mobility Limited Spice Digital company ) [8] [9] He served as an Additional Director of Wall Street Finance Ltd. [10] and a Co-Founder and First Chairman of mobile services industry body, the Mobile Entertainment Forum.[ citation needed ] 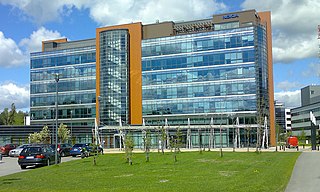 Nokia Corporation is a Finnish multinational telecommunications, information technology, and consumer electronics company, founded in 1865. Nokia's headquarters are in Espoo, in the greater Helsinki metropolitan area. In 2018, Nokia employed approximately 103,000 people across over 100 countries, did business in more than 130 countries, and reported annual revenues of around €23 billion. Nokia is a public limited company listed on the Helsinki Stock Exchange and New York Stock Exchange. It is the world's 415th-largest company measured by 2016 revenues according to the Fortune Global 500, having peaked at 85th place in 2009. It is a component of the Euro Stoxx 50 stock market index.

Symbian Ltd. was a software development and licensing consortium company, known for the Symbian OS, a smartphone operating system, and other related technologies. Its headquarters were in Southwark, London, England, with other offices opened in Cambridge, Sweden, Silicon Valley, Japan, India, China, South Korea, and Australia.

Singapore Telecommunications Limited is one of the four major telcos operating in the Republic of Singapore, the others being Starhub, M1 and TPG Telecom. The company is the largest mobile network operator in Singapore with 4.1 million subscribers and through subsidiaries, has a combined mobile subscriber base of 640 million customers at the end of financial year 2017 The company was known as Telecommunications Equipment until 1995. Singtel provides ISP (SingNet), IPTV and mobile phone networks and fixed line telephony services. 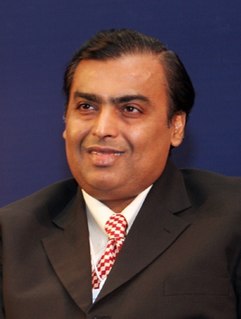 Mukesh Dhirubhai Ambani is an Indian business magnate, the chairman, managing director, and largest shareholder of Reliance Industries Limited (RIL), a Fortune Global 500 company and India's most valuable company by its market value. According to Forbes magazine, he is the richest man in Asia and the 13th richest person in the world as of March 2019.

Jorma Jaakko Ollila is a Finnish businessman who was chairman of Royal Dutch Shell from 1 June 2006 to May 2015, and at Nokia Corporation chairman from 1999 to 2012 and CEO from 1992 to 2006. He has been a director of Otava Books and Magazines Group Ltd. since 1996 and UPM-Kymmene since 1997, and an advisory partner at Perella Weinberg Partners, a New York-based boutique investment bank founded by Joseph R. Perella and Peter Weinberg in 2006.

M1 Limited is one of the four major telcos operating in the Republic of Singapore, the others being TPG Telecom, Starhub and Singtel.

Simon Murray, CBE is a Hong Kong-based British businessman, adventurer, author, and former French Foreign Legionnaire. He was the oldest man to reach the South Pole unsupported, at the age of 63.

Alcatel is a French brand of mobile handsets owned by Finnish consumer electronics company Nokia and used under license by Chinese electronics company TCL Corporation. The Alcatel brand was licensed in 2005 by former French electronics and telecommunications company Alcatel-Lucent to TCL for mobile phones and devices, and the current license expires at the end of 2024. Nokia acquired the assets of Alcatel-Lucent in 2016 and thus also inherited the licensing agreements for the Alcatel brand.

The Singapore Institute of Technology is the fifth autonomous university in Singapore. Established in May 2009, SIT is Singapore's first university of applied learning.

migme Limited was a global digital media company focused on emerging markets. The company was registered in Australia and was listed on the Australian Securities Exchange (ASX:MIG) from 11 August 2014 to 22 August 2017.There is also a secondary listing on the Deutsche Borse. The company was formed in Perth, Australia in 2006 and commenced operations under the name mig33. In 2014, it was rebranded migme. FIH Mobile, a handset unit of Taiwanese consumer electronics group Hon Hai Precision, took a 19.9% stake in the company in 2014. Originally developed as a social chatting and gaming application for feature phones, migme has grown to become a mobile entertainment platform that services Southeast Asia, South Asia, the Middle East and Africa. The company headquarters are in Singapore with offices in Malaysia, Indonesia, Taiwan, Hong Kong, Manila, and Australia. The company delivers social entertainment services through portfolio brands migme, LoveByte, alivenotdead and Sold.

Rajeev Suri is an Indian–Singaporean business executive and the CEO of Nokia. Before the current assignment in May 2016, he was the CEO of Nokia Solutions and Networks from 2015 and held various positions in Nokia since 1995. Suri became the CEO of Nokia when the sale of Nokia's phone division to Microsoft Mobile was completed, replacing Stephen Elop. He is an alumnus of Manipal Academy of Higher Education.

Spiking is a mobile social trading platform which provides financial information about 10 stock exchange markets in Asia and Australia. By processing the latest disclosures published on the markets, the mobile app allows investors to track stocks for moves made by company directors and substantial shareholders. It also provides other relevant information, like the main shareholders of companies or the portfolios of sophisticated investors. 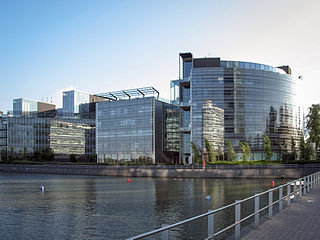 Microsoft Mobile was a subsidiary of Microsoft involved in the development and manufacturing of mobile phones. Based in Espoo, Finland, it was established in 2014 following the acquisition of Nokia's Devices and Services division by Microsoft in a deal valued at €5.4 billion, which was completed in April 2014. Nokia's then-CEO, Stephen Elop, joined Microsoft as president of its Devices division following the acquisition, and the acquisition was part of Steve Ballmer's strategy to turn Microsoft into a "devices and services" company. Under a 10-year licensing agreement, Microsoft Mobile held rights to sell feature phones running the S30+ platform under the Nokia brand.

Android One is a near-stock version of the Android operating system released by Google. Android One cannot be altered by phone manufacturers, and only runs on certain smartphones. Android One runs on Google's stock UI and promises regular security updates for three years, as well as OS updates for two years.

2C2P is a Singapore-headquartered pan-Asian payment services company that works with financial institutions, e-commerce and m-commerce merchants. It operates across Southeast Asia, including in Cambodia, Indonesia, Laos, Malaysia, Myanmar, Philippines and Thailand, as well as in Hong Kong.

Nokia is a Finnish multinational corporation founded on the 12 May 1865 as a single paper mill operation. Through the 19th century the company expanded, branching into several different products. In 1967, the Nokia corporation was formed. In the late 20th century, the company took advantage of the increasing popularity of computer and mobile phones. However, increased competition and other market forces caused changes in Nokia's business arrangements. In 2014, Nokia's mobile phone business was sold to Microsoft.

YuuZoo is an online platform that combines social networking, e-commerce, and gaming. It helps customers set up their own social media sites and integrate it with YuuZoo’s or the customers’ own eco-systems. The platform also has advertising functionalities and a payment service provider called YuuPay.