Thomaston Castle is a medieval castle located west of Maybole, South Ayrshire, Scotland. It looks much as it did hundreds of years ago. Little has changed, except for the addition of a house located on the property. The castle is run down and has debris falling in on it. [1]

Thomaston Castle was originally built in the 13th century for a nephew of Robert The Bruce, [2] and first owned by Alan McIlvaine (b. 1500 in Ayrshire) whose family supplied wine to the Earls Kennedy, owners of nearby Culzean Castle. Upon his death, Thomaston passed to Patrick McIlvaine on his marriage to Isobel Kennedy, niece of the Earl of Cassilis. 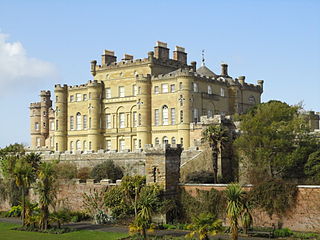 Culzean Castle is a castle overlooking the Firth of Clyde, near Maybole, Carrick, on the Ayrshire coast of Scotland. It is the former home of the Marquess of Ailsa, the chief of Clan Kennedy, but is now owned by the National Trust for Scotland. The clifftop castle lies within the Culzean Castle Country Park and is opened to the public. Since 1972 and until recently, an illustration of the castle has featured on the reverse side of five pound notes issued by the Royal Bank of Scotland.

Drongan, a former mining village, is situated on the western edge of Ayrshire, some 8 miles from Ayr and 8 miles from Cumnock and has a population of 3,205 approx. 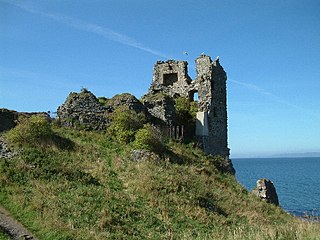 Dunure Castle is located on the west coast of Scotland, in South Ayrshire, about 5 miles (8.0 km) south of Ayr and close to the village of Dunure. Today the castle stands in ruins on a rocky promontory on the Carrick coast, overlooking the small harbour of Dunure. 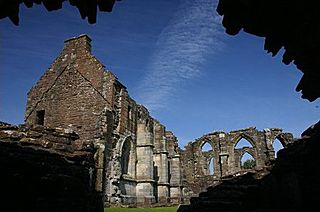 The Abbey of Saint Mary of Crossraguel is a ruin of a former abbey near the town of Maybole, South Ayrshire, Scotland. Although it is a ruin, visitors can still see the original monks’ church, their cloister and their dovecot. 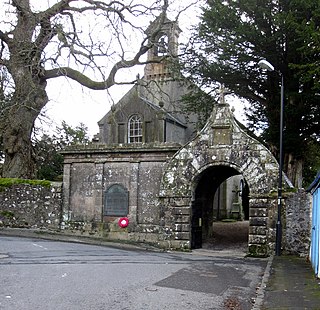 Kirkmichael is a village in South Ayrshire, Scotland, located between Patna, Maybole and Straiton. It was also a Civil Parish. 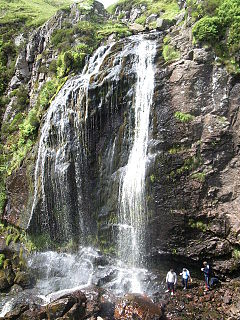 The River Garnock, the smallest of Ayrshire's six principal rivers, has its source on the southerly side of the Hill of Stake in the heart of the Clyde Muirshiel Regional Park. About a mile and a half south of this starting point the untested stream tumbles over the Spout of Garnock, the highest waterfall in Ayrshire, once thought to be the river's origin. The river then continues, for a total length of 20 miles (32 km) or so, through the towns of Kilbirnie, Glengarnock, Dalry and Kilwinning to its confluence with the River Irvine at Irvine Harbour.

Loch Doon Castle was a castle that was located on an island within Loch Doon, Scotland.

Ballantrae is a community in Carrick, South Ayrshire, Scotland. The name probably comes from the Scottish Gaelic Baile na Tràgha, meaning the "town by the beach". Ballantrae has a Primary school. The beach consists of shingle and sand and offers views of Ailsa Craig, the Arran and Kintyre.

Greenan Castle is a 16th-century ruined tower house, around 2.5 miles (4.0 km) south-west of Ayr in South Ayrshire, Scotland. Situated at the top of a sea cliff, it was originally a promontory fort converted into a motte-and-bailey in the 12th century. In the 15th century a tower house was built by the Lords of the Isles, which later passed into the hands of the Kennedy family.

Kirkoswald Parish Church is located in the small village of Kirkoswald, South Ayrshire, Scotland. It is a parish church in the Church of Scotland.

Law Castle is situated on the lower slopes of Law Hill on the edge of West Kilbride, in North Ayrshire, Scotland. It is around 200 metres (660 ft) from the railway station.

Kirkoswald is a village and parish in the Carrick district of Ayrshire, Scotland, 1¾ miles from the coast and four miles southwest of Maybole. It takes its name from its kirk (church), dedicated to Oswald of Northumbria, who is said to have won a battle here in the 7th century. The old church, which was built in 1244 and houses the baptismal font of Robert the Bruce, is now a ruin in the grounds of the modern church, which was built in 1777 to a design by Robert Adam. Kirkoswald is also noted for its connection with Robert Burns, whose maternal ancestors, the Brouns, were from the village. Burns also attended school here, and would later base the characters Tam o' Shanter, Kirkton Jean and Souter Johnnie on village locals Douglas Graham, John Davidson and Jean Aird. 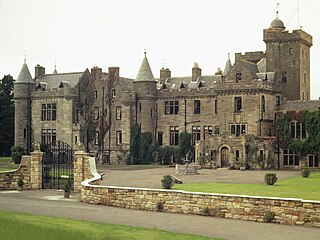 Glenapp Castle, formerly the family seat of the Earl of Inchcape, is now a luxury hotel and restaurant located about 1.5 miles (2.4 km) south east of Ballantrae, South Ayrshire, Scotland. 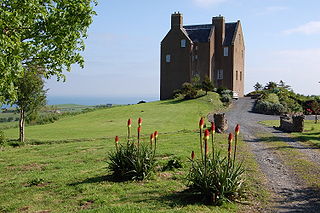 Dunduff Castle is a restored stair-tower in South Ayrshire, Scotland, built on the hillside of Brown Carrick Hills above the Drumbane Burn, and overlooking the sea above the village of Dunure.

Maidens is a village in the Kirkoswald parish of Ayrshire, Scotland. Situated on the coast of the Firth of Clyde at the southern end of Maidenhead Bay, a series of rocks known as the "Maidens of Turnberry" form a natural harbour. The village lies two miles north of the ruinous Turnberry Castle, ancient seat of the Earls of Carrick, and five miles west of Maybole. It formerly had its own railway station on the Maidens and Dunure Light Railway. At 1991, Maidens had a population of 567.

Sorn Castle is located by the River Ayr just outside the village of Sorn in East Ayrshire, Scotland. The castle comprises a medieval tower house, which was extended over the years, and remodelled in the Scots Baronial style by David Bryce in the 1860s. The castle is protected as a category A listed building. 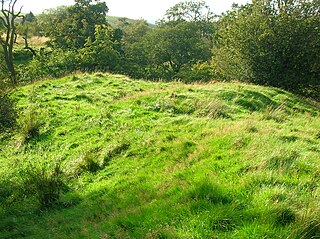 Kerse Castle or Carse Castle is a ruined fortification once held by the Craufurd Clan, situated in the Parish of Dalrymple, East Ayrshire, Scotland.

Montgomerieston, sometimes known as Montgomeryston or Ayr Fort, was a small burgh of regality and barony of only 16 acres or 6.5 hectares located within the walls of the old Ayr Citadel, also known as Cromwell's Fort or Oliver's Fort, situated in the town of Ayr, South Ayrshire, Scotland. Montgomerieston was named for the Montgomerie family, Earls of Eglinton.