In 2016, Thompson Creek was acquired by Centerra Gold for $1.1 billion. [3] The deal took place because of Thompson Creek's substantial debt incurred to develop their Mount Milligan mine.

Centerra Gold Inc. is a Canadian-based gold mining and exploration company engaged in the operation, exploration, development and acquisition of gold properties in North America, Asia and other markets worldwide and is one of the largest Western-based gold producers in Central Asia.

Pursuant to the acquisition of Terrane Metals Corp. in October 2010 for about US$700 million in a combination of cash and common stock, the company diversified its assets by adding significant reserves of copper and gold. [7] Concurrent with the acquisition of Terrane, the Company entered into a Gold Stream Arrangement with Royal Gold Inc. as a financing mechanism for the purchase of Terrane. [7] The Gold Stream Agreement was amended twice for a total payment by Royal Gold of approximately US$781 million for the right to purchase 52.25% of the gold from Mount Milligan Mine for US$435 per ounce for the life of the mine. [7]

In October 2010, through the Terrane acquisition, Thompson Creek Metals obtained the Mount Milligan development project and initiated construction soon after. [1] On August 15, 2013, the initial feed to the concentrator started the operation of the mine. [1] By September 2013, the mine had its first production, a copper-gold concentrate. [1] Mount Milligan Mine reached commercial production as of February 18, 2014, which means that the mill operated at 60% planned capacity throughput for 30 days. [1] Industrious activities were sustained through 2014 and are consistent today. [1] The Company predicts that it will reach 60,000 tpd on a steady basis once it installs a secondary crushing circuit. [1] Thompson Creek Metals expects to reach approximately 60,000 tpd by the end of 2015 by utilizing temporary crushing. [1]

Thompson Creek Mine (near Challis, Idaho) — The Thompson Creek Mine is a primary molybdenum mine located approximately 35 miles southwest of Challis in Idaho's Custer County, a historic mining area. Known as the Thompson Creek deposit, it was discovered in 1968 by Cyprus Minerals Corporation. The mine has been in operation since 1983 and uses conventional open-pit mining methods. The mine was sold in 1993 to Thompson Creek Metals Company (USA), which began mining at the site in April 1994. The company has claims on over 22,000 acres of land (includes waste dumps). It operates as an open pit mine, [6] and includes Bruno Creek Tailings Impoundment, the second tallest center-line tailings dam in the world. [10] The capacity of the mill to process is approximately 30,000 tons of ore per day to produce molybdenum sulfide concentrate. It is then roasted at the Company’s Langeloth Metallurgical Facility into molybdenum trioxide, ferromolybdenum products, and other specialty products. Due to low molybdenum prices, this mine is under maintenance and care currently. [2]

Endako Mine — 3 pit, open pit mine in central British Columbia (other 2 projects Berg and Davidson are west of it). Subsidiary Thompson Creek Holding owns 75% of the mine while Japanese company Sojitz Corporation has the other 25%. The operation also involves processing the molybdenum ore into a disulfide and then molybdenum trioxide through roasting. [11] Expansion projects, which began in 2008 increased capacity by 77.4% (though expansions which include new mills will cut the mine life by 38.5% to 16 years). [12] [13]

Langeloth Metallurgical Facility — The Langeloth Metallurgical Facility, located 25 miles west of Pittsburgh, Pennsylvania, is a world-class facility with a long history of producing high-quality metallurgical products used mainly in the steel and chemical industries. The facility has roasting capacity of 35 million pounds of molybdenum per year. Four multiple-hearth furnaces are used for the conversion (roasting) of molybdenum disulfide concentrates into technical grade molybdenum oxide (tech oxide), which is sold in powder form or briquettes or converted into pure molybdenum oxide or ferromolybdenum. Two other furnaces process spent catalyst material containing other metals. [14]

Berg Property — Located about 50 miles southwest of Houston, BC and 15 miles northwest of Huckleberry Mine, this project is continuously assessed to determine if the deposit of copper, molybdenum, and silver is commercially ready for production. The Berg property is 100% owned by the company. [1] Royal Gold has 1% net smelter return royalty held on eight of the mineral claims and one mining lease, including those which host the deposit on the Berg property. [1] All mineral claims and the mining lease are in good standing and good to dates ranging from August 2015 to November 2021. [1] Mineral claims are subject to exploration expenditure obligations, or they may choose to pay annual fees to the province in lieu of exploration expenditures. Thompson Creek expects to renew such mineral claims and mining lease in the ordinary course. [15]

Antofagasta plc is a Chilean business that operates in various sectors of the economy. It is one of the most important conglomerates of Chile with equity participation in Antofagasta Minerals, the railroad from Antofagasta to Bolivia, Twin Metals in Minnesota and other exploration joint ventures in different parts from the world.

Newcrest Mining Limited is an Australian-based corporation which engages in the exploration, development, mining and sale of gold and gold-copper concentrate. It is Australia's leading gold mining company and its operations have expanded beyond Australia, for example Indonesia, thus becoming a prominent international mining corporation. Newmont Mining Corporation initially started the company as a subsidiary in 1966. The subsidiary became Newmont Holdings Pty Ltd. in 1980 and in 1990 acquired 100% of Australmin Holdings Ltd. taking the current name.

KGHM Polska Miedź S.A., commonly known as KGHM, is a Polish multinational corporation that employs around 34,000 people around the world and has been a leader in copper and silver production for more than 50 years. In 1991, the company was established as a state enterprise and since 1997, their shares have been traded on the Warsaw Stock Exchange. Currently, KGHM operates 9 open-pit and underground mines located in Poland, Canada, the USA and Chile and is actively advancing 4 projects. KGHM produces key global resources including copper, copper sulphate, gold, silver, nickel, nickel sulphate, molybdenum, rhenium, lead, sulphuric acid, selenium and platinum group metals.

Jiangxi Copper is the largest copper producer in Mainland China. Its operations include copper mining, milling, smelting and refining to produce copper-related products, including pyrite concentrates, sulfuric acid and electrolytic gold and silver. Its chairman is Mr. Li Yuhuang and its headquarters is at Guixi, Jiangxi, China.

Taseko Mines Limited is a mid-tier copper producer located in British Columbia, Canada. It operates Gibraltar Mine, the second largest open-pit copper mine in Canada, and is in the planning stages for several other mines including the Prosperity Mine, Harmony, and Aley. All production is sold at non-hedged market based prices. The market capitalization currently is roughly 740 million dollars.

Bard Ventures Ltd. is a Canadian-based mining company and is listed on the TSX Venture Exchange. It has mineral properties in British Columbia and is headquartered in Vancouver. The main focus is on molybdenum.

Adex Mining Inc. is a Toronto, Ontario, Canada-based mining exploration company engaged in the development of its wholly owned Mount Pleasant Mine property in Charlotte County, New Brunswick, Canada. According to a Government of Canada report, Mount Pleasant is "North America's largest tin deposit and the world's largest reserve of indium." The company's stock trades on the TSX Venture Exchange under the symbol ADE.

Royal Gold is a precious metals company with royalty claims on gold, silver, copper, lead and zinc at mines in over 20 countries. Over half of the developmental properties it has interests in are producing however most have not passed the exploration stage. Not all contracts are the same, some like the one it has with Thompson Creek Metals regarding a quarter of the gold produced at Mount Milligan lasts the length of the mine's life while others like Taparko in West Africa which ranges depending on the price of gold and the one in Pascua Lama where the 5.23% royalty is contingent on gold prices are structured differently; Most claims are between 1% and 5% but a few like Andacolo (75%) and Taparko (15%) are over 10%. It also has an interest in Osisko Mining's Malartic gold project within the abitibi gold belt.

SSR Mining Inc., formerly Silver Standard Resources, is a Vancouver-based mining company focused on the operation, development, exploration and acquisition of precious metal projects. It is listed under the ticker symbol SSRM on the NASDAQ Capital Markets and the Toronto Stock Exchange. 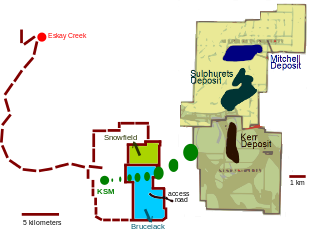 Kerr-Sulphurets-Mitchell (KSM) is an active mine exploration project 65 km northwest of Stewart, British Columbia. The property is 100% owned by Toronto-based Seabridge Gold. Denver-based royalty company Royal Gold owns a 2% net smelter return royalty on the mine. Since May 2011 the project has also been called Kerr-Sulphurets-Mitchell-Iron Cap due to the addition of significant reserves from the Iron Cap region.

Imperial Metals Corporation known as IMI Imperial Metals Inc until 2002, is a Canadian metals and mining company. Engaging in the acquisition, exploration, development, mining, and production of base and precious metals in North America, the majority of its holdings and operations are in British Columbia. 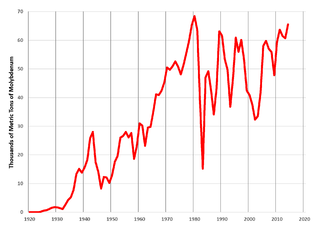