Thompson Square was a rapid transit station in Charlestown, Massachusetts. It served the Charlestown Elevated, part of the MBTA's Orange Line, from 1902 until 1975.

Rapid transit or mass rapid transit (MRT), also known as heavy rail, metro, subway, tube, U-Bahn or underground, is a type of high-capacity public transport generally found in urban areas. Unlike buses or trams, rapid transit systems are electric railways that operate on an exclusive right-of-way, which cannot be accessed by pedestrians or other vehicles of any sort, and which is often grade separated in tunnels or on elevated railways. 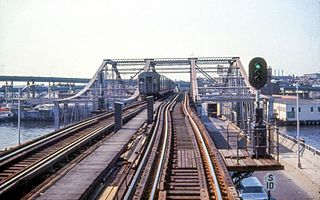 The Charlestown Elevated was a segment of the MBTA Orange Line rapid transit line that ran from the Canal Street Incline in downtown Boston, Massachusetts through Charlestown to a terminal in Everett, Massachusetts. It opened in June 1901 and was replaced by the Haymarket North Extension in April 1975. 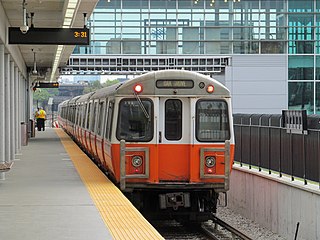 The Orange Line is one of the four subway lines of the Massachusetts Bay Transportation Authority. It extends from Forest Hills in Jamaica Plain, Boston in the south to Oak Grove in Malden in the north. It meets the Red Line at Downtown Crossing, the Blue Line at State, and the Green Line at Haymarket and North Station. It connects with Amtrak service at Back Bay and North Station, and with MBTA Commuter Rail service at Back Bay, North Station, Forest Hills, Ruggles station in Roxbury, and Malden Center in Malden. From 1901 to 1987, it provided the first elevated rapid transit in Boston; the last elevated section was torn down in 1987 when the southern portion of the line was moved to the Southwest Corridor.

Thompson Square station opened on May 22, 1902, almost a year after the rest of the Charlestown Elevated line, as an infill station. It was closed in 1975, when the line was rerouted into a tunnel that was constructed as part of the Haymarket North Extension project. [1] The station was lowered to the ground, with plans to reuse the structure as a restaurant, but it was destroyed by fire on April 19, 1976, before the conversion could be done. [2] [3]

An infill station is a train station built on an existing passenger rail, rapid transit, or light rail line to address demand in a location between existing stations. Such stations take advantage of existing train service and encourage new riders by providing a more convenient location. Many older transit systems have widely spaced stations and can benefit from infill stations. In some cases, new infill station are built at sites where a station had once existed many years ago, for example the Cermak–McCormick Place station on the Chicago "L"'s Green Line.

The Haymarket North Extension is a section of the Massachusetts Bay Transportation Authority's rapid transit Orange Line which currently constitutes the northern section of the line. It runs from North Station through an underground crossing of the Charles River, then along the Haverhill Line right-of-way to Oak Grove station in Malden, Massachusetts. Built to replace the Charlestown Elevated and originally intended to be extended as far as Reading, it opened in stages between 1975 and 1977.

Charles/MGH is a rapid transit station on the MBTA Red Line, elevated above Charles Circle on the south end of the Longfellow Bridge in the West End neighborhood of Boston, Massachusetts. 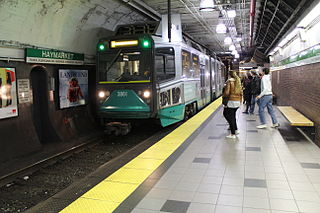 Haymarket is a subway station in Boston, Massachusetts. It serves the MBTA's Green and Orange lines, and is located at the corner of Congress and New Sudbury streets in Downtown Boston. Haymarket allows transfers between the Orange and Green lines, as does North Station one stop to the north. Haymarket was named for Haymarket Square, which has served as a produce market since around 1830. 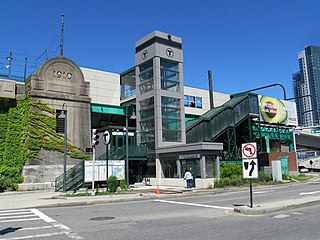 Science Park is an elevated light rail station on the MBTA Green Line, and is located at the Boston end of the Old Charles River Dam at Leverett Circle, near the intersection of Nashua Street and Charles Street. The station is located on the Lechmere Viaduct, which connects North Station to the Lechmere terminus of the Green Line. As of 2015, the station is served only by the Green Line "E" Branch, which runs from Heath Street to Lechmere. The station is located at an area of land called Science Park, which it is named after. It is near the Boston Museum of Science.

Malden Center is an intermodal transit station in Malden, Massachusetts. Located on an elevated grade above Pleasant Street in downtown Malden, it serves the MBTA's rapid transit Orange Line and the MBTA Commuter Rail Haverhill Line, as well as 13 MBTA Bus routes. The current station opened on December 27, 1975, replacing an older brick station which has since been repurposed as a restaurant.

The Atlantic Avenue Elevated was an elevated railway around the east side of Downtown Boston, Massachusetts, providing a second route for the Boston Elevated Railway's Main Line Elevated around the Washington Street Tunnel. It was in use from 1901 to 1938, when it was closed due to low ridership, later being demolished. 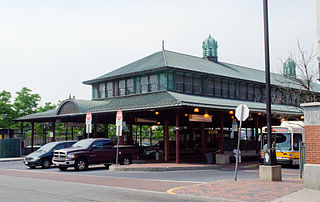 As with many large cities, a large number of Boston-area streetcar lines once existed. However, only a few remain, namely the four branches of the Green Line and the Ashmont-Mattapan High Speed Line, with only one running regular service on an undivided street.

Sullivan Square is a rapid transit station in Boston, Massachusetts. It serves the MBTA's Orange Line, and is also a major bus transfer point. It is located just west of the Sullivan Square traffic circle in the Charlestown neighborhood, adjacent to East Somerville. The modern subway station was built in 1975, and replaced an earlier Charlestown Elevated station established in 1901. 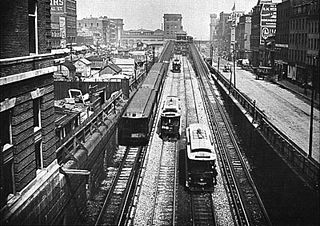 The Canal Street Incline was the transition between subway and elevated railway on the Green Line streetcar line and the Orange Line rapid transit line in the northern part of downtown Boston, Massachusetts, United States.

Community College is a rapid transit station in Boston, Massachusetts. It serves the MBTA Orange Line. It is located in the Charlestown neighborhood off Austin Street near New Rutherford Avenue (MA-99), under the double-decked elevated structure carrying Interstate 93 to the Zakim Bunker Hill Bridge. The station is named for the adjacent Bunker Hill Community College, the main population the station serves.

The Washington Street Elevated was an elevated segment of Boston's Massachusetts Bay Transportation Authority subway system, comprising the southern stretch of the Orange Line. It ran from Chinatown through the South End and Roxbury, ending in Forest Hills in Jamaica Plain, Boston. 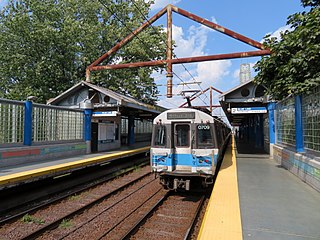 Beachmont is an elevated rapid transit station in Revere, Massachusetts. It serves the MBTA Blue Line, and is located above Winthrop Avenue in the Beachmont neighborhood. Beachmont station is fully accessible, with elevators from the lobby to the platforms. 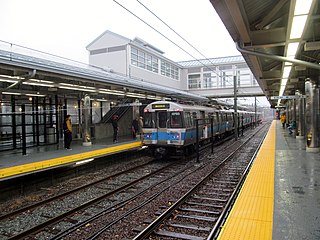 Orient Heights is a rapid transit station in Boston, Massachusetts. The station serves the MBTA Blue Line. It is located off Bennington Street in East Boston's Orient Heights neighborhood. Formerly a Boston, Revere Beach and Lynn Railroad station under various names from 1875 to 1940, it reopened in 1952. The 1952-built station was closed in March 2013 for a complete rebuilding to provide full accessibility and reopened on November 26, 2013. City Square was a rapid transit station in Charlestown, Massachusetts. It served the Charlestown Elevated, part of the MBTA's Orange Line, from 1901 until 1975. It was closed when the line was rerouted into a tunnel that was constructed as part of the Haymarket North Extension project. The closest replacement station to the location is now Community College.

Everett was a rapid transit station in Everett, Massachusetts. It served the MBTA's Orange Line. It opened in 1919 as an extension of the Charlestown Elevated, and served as its northern terminus until the Elevated was closed and demolished in 1975, when it was replaced by the Haymarket North Extension.