Thomson High School is a public high school located in Thomson, Georgia, United States. It is the only high school in the McDuffie County School District. 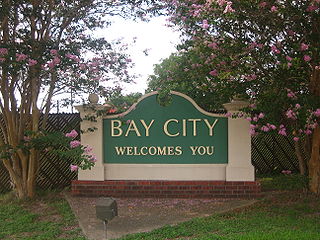 Bay City is a city in Matagorda County, Texas, United States. The population was 17,614 at the 2010 census. It is the county seat of Matagorda County. The current mayor is Robert Nelson.

William Arthur Johnson, better known as Billy "White Shoes" Johnson, is an American former professional football player who was a wide receiver and return specialist in the National Football League (NFL) from 1974 through 1988. He was one of the first players to display elaborate celebrations in the end zone. 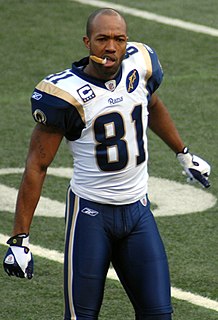 Torry Jabar Holt is a former professional American football player who was a wide receiver in the National Football League (NFL) for eleven seasons. He was named to the Pro Bowl seven times and retired with the 10th most receiving yards, including a record six consecutive seasons with 1,300 yards. He played college football at North Carolina State University, and earned consensus All-American honors. He was drafted by the St. Louis Rams in the first round of the 1999 NFL Draft, and spent the next ten years with the Rams and is remembered as one of the members of the "Greatest Show on Turf."

O'Dea High School is a Catholic all boys high school founded in 1923 and is located in Seattle's First Hill neighborhood. The school is named after Edward John O'Dea who was bishop of Seattle when the school was built. O'Dea is a part of the Archdiocese of Seattle.

Obafemi Devin Ayanbadejo is a former American football running back, fullback and special teams player. He was signed by the Minnesota Vikings as an undrafted free agent in 1997. In 1998 as a member of the Minnesota Vikings he was allocated to the London Monarchs of the NFL Europe league. A since defunct developmental league. Ayanbadejo also played for the Baltimore Ravens (1999-2002), Miami Dolphins (2002-2003), Arizona Cardinals 2004-2007), Chicago Bears (2007) and California Redwoods (2009) of the UFL. His professional football career began in 1997 and he officially retired from professional football in January, of 2010. He played college football at San Diego State.

Waubonsie Valley High School (WVHS) is a public high school in Aurora, Illinois, United States. It was established in 1975 and is part of the Indian Prairie School District 204.

Will Herthie Shields is a former college and professional American football player who was an offensive guard in the National Football League (NFL) for fourteen seasons. He played college football for the University of Nebraska, earning consensus All-American honors and winning the Outland Trophy. He played his entire professional career for the NFL's Kansas City Chiefs, and never missed a game in fourteen seasons. Shields was inducted into the College Football Hall of Fame in 2011 and the Pro Football Hall of Fame in 2015.

Richard Jose Casares was an American college and professional football player who was a fullback in the National Football League (NFL) and American Football League (AFL) for twelve seasons during the 1950s and 1960s. Casares played college football for the University of Florida, where he was standout fullback and kicker. Casares played professionally for the Chicago Bears and Washington Redskins of the NFL, and was a member of the expansion Miami Dolphins of the AFL.

Katy High School is a high school located in Katy, Texas which serves grades 9 through 12. It is a part of the Katy Independent School District. The school serves the City of Katy and the unincorporated Harris County community of Cimarron.

Dothan High School is a public co-educational institution encompassing grades 10 to 12. The high school is located in the southeastern portion of the state of Alabama in Dothan, and has the 36th-largest high school student population in the state. The school won two football state titles during the 1980s.

Jeremy Michael Parquet is a former professional gridiron football player. He was drafted by the Kansas City Chiefs in the seventh round of the 2005 NFL Draft. He played college football at Southern Mississippi. 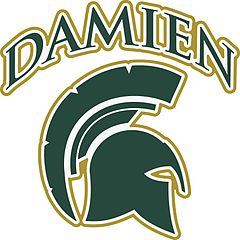 Damien High School is an all-male Roman Catholic high school in La Verne, in the U.S. state of California named for Saint Damien of Molokai. The school had its first graduating class in 1963. Each of Damien's freshmen classes draws from an average of over 75 different elementary and junior high schools for youths from Los Angeles and San Bernardino counties. It is located in the Roman Catholic Archdiocese of Los Angeles. It is a part of the tri-school community including St. Lucy's Priory High School and Pomona Catholic High School.

Steven Daniel Hendrickson is a former professional American football linebacker in the National Football League. Hendrickson attended Napa High School where he was an outstanding varsity player during all four years at the school. His #30 jersey remains the only one ever retired by the school. He played college football for the California Golden Bears at California where he graduated with a major in history. He was named defensive player of the game at the 1988 Blue–Gray Football Classic and was drafted in the sixth round of the 1989 NFL Draft by the San Francisco 49ers. He played seven NFL seasons for the San Francisco 49ers, Dallas Cowboys, San Diego Chargers, Houston Oilers and Philadelphia Eagles. Hendrickson was a member of the San Francisco 49ers when they won their fourth Super Bowl XXIV on January 28, 1990. During his professional career, he played various positions despite his relatively small stature. Hendrickson is fondly remembered among Chargers fans for being used as a short yardage, goal line running back, despite the fact that his main position was a defensive one. In particular, Hendrickson scored on a 1-yard run against the Kansas City Chiefs in a January 1993 playoff game in San Diego, to cap off a 17-0 shutout of the Chiefs.

Fred Willis is a retired American football running back who played six seasons in the National Football League for the Cincinnati Bengals and Houston Oilers.

Timpview High School (THS) is a public secondary school located in Provo, Utah, United States. Timpview is a 5A school and is one of the three high schools in the Provo City School District. The current principal is Fidel Montero.