Ettore Dulay, better known by his stage name Thor Dulay or simply as Thor, is a Filipino singer-songwriter and vocal coach.

Born in Panabo City, Davao del Norte, he was a choirboy who began singing professionally at the age of nineteen. He finished his high school at Maryknoll High School of Panabo. [2]

He graduated from Ateneo de Davao University before trying his luck in Manila with his band, Extreme Mix, now known as Myxtreme. He has also provided backing vocals for artists such as Luke Mejares and Jay-R. [3]

His debut album was released in 2004 by Evolution Music, distributed by Warner Music. [2]

Duets with Thor & Mccoy was a regular feature on Wave 89.1 and tracks from this were collected for his second solo album Soul Obsessions: Duets With Thor. [3]

He was a part of Satya Project, an R&B-Soul-Jazz band led by Marcos Sainz and Juan Galiardo. [4] The band recorded their first album, Shine A Light, in Spain. [1] [4] He was able to perform as front act for David Foster at the Araneta, won an Awit Award in 2004 for Best Collaboration with Nina, and another award in 2005 for the cut Kasalanan Nga Ba?" as Best Theme Song for that year's MMFF.

As a backing vocalist, Thor worked with several musical bands for various television shows such as Gandang Gabi Vice. [5]

He is married to non-showbiz wife Mai Dulay, with his baby boy.

Dulay is a graduate of Ateneo de Davao University.

2013: The Voice of the Philippines

He auditioned for the first season of The Voice of the Philippines, which aired on ABS-CBN on Saturday, 15 June 2013. He sang "I Have Nothing" by Whitney Houston that had all four coaches offer him a place on their respective teams. [6] He ultimately picked apl.de.ap to be his coach. [7]

On 26 July 2014, Thor took part as an interpreter for the song entry titled "The Only One" written by Venelyn San Pedro at the third Philippine Popular Music Festival. On 30 January 2015, he released his fourth studio album titled "Master Of Soul" under ABS-CBN's Star Music. [11] The music video for its carrier single is "Paano Ko Sasabihin" premiered on 25 January. [12] [13] 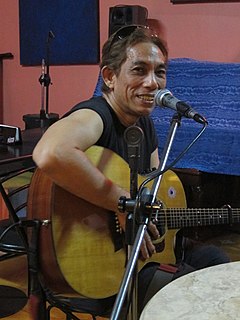 José Íñigo Homer Lacambra Ayala, professionally known as Joey Ayala, is a Filipino singer, songwriter and former chairman of the music committee of the National Commission for Culture and the Arts. He is well known for his style of music that combines the sounds of Filipino ethnic instruments with modern pop music.

Catherine Cruz Gonzaga-Morada, also known as Alex Gonzaga (AG), is a Filipina media personality, comedienne, businesswoman, host, singer, and actress. Her self-titled YouTube channel is one of the most subscribed channel in the Philippines.

Dennis Regino Magloyuan Magdaraog, known professionally as April Boy Regino, was a Filipino singer and songwriter who popularized ballads such as "Paano ang Puso Ko", "Umiiyak ang Puso" and "Di Ko Kayang Tanggapin" in the 1990s and novelty songs such as "Ye Ye Vonnel". He always wore a baseball cap in public as a trademark.

Niño Muhlach is a Filipino actor and former child actor. He is the father of Filipino child actor Alonzo Muhlach.

Zoe Emmanuelle Camcam Vera is a Filipina singer-songwriter and actress.

Michael Yonting, more popularly known by his screen name Mitoy Yonting, is a Filipino singer, comedian, actor, and lead vocalist for his band, The Draybers. Yonting rose to fame after winning the first season of The Voice of the Philippines in 2013.

Jason James Desiata Dy is a Filipino singer, songwriter and occasional actor. He is best known as the winner of the second season of The Voice of the Philippines.

Paolo Onesa is a Filipino recording artist and an EDM Pop sensation. Onesa recently signed a contract under HomeWorkz which is handled by Jay R Sillona. He has been part of Star Magic. He participated in the first season of The Voice of the Philippines and advanced to the semi-finals under Bamboo Mañalac's team.

The Breakup Playlist is a 2015 Filipino musical romantic drama film starring Piolo Pascual and Sarah Geronimo. It is written by Antonette Jadaone and directed by Dan Villegas. It was released on July 1, 2015 by Star Cinema and Viva Films.

Daryl Neilsonn Ong, or simply known as Daryl Ong is a singer-songwriter in the Philippines. He rose to fame after joining the singing competition The Voice of the Philippines .

Karen Jade Cal, professionally known as Kaye Cal, is a Filipino singer-songwriter who rose to popularity after becoming a grand finalist of the first season of the talent competition Pilipinas Got Talent, in which she competed in as the lead singer of Ezra Band. She has since been performing as a solo artist and has released several singles.