Thoroughbred valuation is the art of determining the value or potential value of a Thoroughbred horse, particularly of race horses.

The highest price paid at auction for a Thoroughbred was set in 2006 at $16,000,000 for a two-year-old colt named The Green Monkey, [14] who was a descendant of Northern Dancer. Record prices at auction often grab headlines, though they do not necessarily reflect the animal's future success; in the case of The Green Monkey, injuries limited him to only three career starts before being retired to stud in 2008, and he never won a race. [14]

Most expensive Thoroughbred yearlings in history sold at auction

For a number of years, in the 1970s and 1980s, horses sired by Northern Dancer (1961–1990) held the top ten price records, with 174 Northern Dancer offspring selling for a total $160 million at the Keeneland Sales over 22 years. [13] The National Thoroughbred Racing Association calls him "one of the most influential sires in Thoroughbred history." [15] At the time of his 1990 death, his descendants had won more than 1,000 stakes races. [13] As of 2020 [update] , twenty-seven of the thirty-three horses on this list were from the Northern Dancer sire line.

The most recent common ancestor in the sire line of all thirty-three horses on this list is Phalaris, all via Pharos except two—Meydan City and King's Consul—via Sickle. 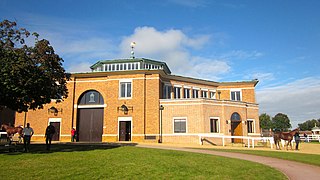 Tattersalls is the main auctioneer of race horses in the United Kingdom and Ireland.

John Magnier is an Irish business magnate. He is Ireland's leading thoroughbred stud owner and has extensive business interests outside the horse-breeding industry. 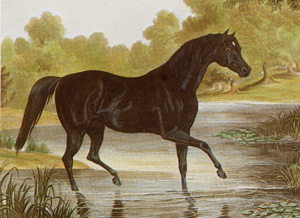 Sir Hercules (1826–1855) was an Irish-bred Thoroughbred racehorse, and was later a successful sire.

Storm Cat was an American Thoroughbred stallion whose breeding fee during the peak of his stud career was $500,000, the highest in North America at the time. He was the leading sire in North America in 1999 and 2000, and the leading juvenile (two-year-old) sire a record seven times. He sired 108 graded stakes winners and eight champions, including Giant's Causeway, who also became a leading sire.

Shamardal was a Thoroughbred racehorse who competed in the United Kingdom and in France and was voted the 2004 European Champion Two-Year-Old.

Xtra Heat is a retired American Thoroughbred Champion racehorse and broodmare. Despite competing almost exclusively at sprint distances, she was named American Champion Three-Year-Old Filly at the Eclipse Awards for 2001. She was inducted into the National Museum of Racing & Hall of Fame on August 7, 2015.

Keeneland Sales is an American Thoroughbred auction house in Lexington, Kentucky founded in 1935 as a nonprofit racing/auction entity on 147 acres (0.59 km2) of farmland west of Lexington, which had been owned by Jack O. Keene. A division of Keeneland Association, Inc., it holds three annual horse auctions that attract buyers from around the globe:

Seattle Dancer was an Irish Thoroughbred racehorse who in 1985 became the world's most expensive yearling ever sold at public auction.

Snaafi Dancer is a Thoroughbred racehorse who was the first yearling to sell for more than US$10 million.

Ballydoyle was a Thoroughbred racehorse who sold for a record-setting $3.5 million as a Yearling in 1981. He showed average ability on the racecourse, winning one race in Ireland as a two-year-old.

Taylor Made Farm is a 1,600-acre Thoroughbred racehorse breeding farm in Jessamine County, Kentucky, and is a leading consignor of Thoroughbred horses. The farm is owned and operated by four brothers, Duncan, Ben, Frank and Mark Taylor with their long time family friend and business associate Pat Payne becoming a partner in 2008.

Palace Episode is an American-bred Thoroughbred racehorse and sire. After being sold for $100,000 as a yearling he was sent to Europe where he made a considerable impact as a two-year-old in 2005. He won on his racecourse debut, took the Acomb Stakes on his next appearance, finished third in the Royal Lodge Stakes and fifth in the Dewhurst Stakes before ending his season by winning the Group One Racing Post Trophy. After running poorly in his only appearance in 2006 he was sent to race in the United States where he had relatively little success, winning one minor race in three years before being retired at the end of the 2009 season.

Justin Casse is a bloodstock agent based in Ocala, Florida. He is the son of Norman Casse, one of the founders of OBS and brother to the trainer Mark Casse. He graduated from Florida State University in 2002 with a bachelor's degree in International Affairs.

Windfields Farm in Chesapeake City was Maryland's leading stud farm for Thoroughbred horses before it closed in 1988.

Voluptuary was a Thoroughbred race horse that won the 1884 Grand National. He had a varied racing career, competing in flat racing before becoming the first horse to win a Grand National without competing in a previous year. He was also the first National winner that had also run in the Epsom Derby. After Voluptuary retired from racing, he received critical acclaim for portraying the racehorse "The Duke" in the play The Prodigal Daughter, which included an on-stage reenactment of a Grand National-type water obstacle.