Thorulf or Torulf (fl. mid-11th century) was medieval prelate, a Bishop of Orkney. Although probably a native Scandinavian, he is known only from the account of the German writer Adam of Bremen. Adam reported that he was appointed bishop by Adalbert, Archbishop of Hamburg, the first Orcadian appointee under Hamburg overlordship. Thorulf's period of appointment coincided with the reign of Earl Thorfinn Sigurdsson, alleged builder of the Birsay church and founder of the bishopric of Orkney.

Thorulf is known only from one source. According to the late 11th-century Saxon writer Adam of Bremen, he was appointed as bishop of Blascona in Orkney by Adalbert, Archbishop of Hamburg. [1] In the mid-11th century, the Archbishop of Hamburg's jurisdiction extended over Scandinavia. [2] Historians identify Blascona with Birsay (Old Norse: Birgisherað), Blascona a Latinisation perhaps derived from an older form. [3]

Adam leaves no personal details about Thorulf, but supplies some information about the Orkney see, stating that the:

...Orkney Islands, although they had previously been ruled by English and Scottish bishops, our primate [Adalbert] on the pope's order consecrated Thorulf bishop for the city of Birsay [in civitatem Blasconam], and he was to have cure of all. [4]

The date was approximately 1050, though could have been at any point between 1043 and 1072, the episcopate of Adalbert. [5] The date 1050 is suggested as this was around the time that Earl Thorfinn Sigurdsson, ruler of Orkney, visited Rome. [6]

As Adam mentioned that the Orcadians had sent legates, it is thought that Thorulf was appointed at Orcadian instigation, and it has even be suggested that the earl himself was among these legates. [7] Historian Barbara Crawford thought that Thorulf was a Scandindavian, and a close associate of the earl. [8] The Orkneyinga saga related that Birsay was the permanent residence of Earl Thorfinn, and that the earl built a minster there [dedicated to Christ] as the seat of the first Orkney bishop. [9]

Although this specific claim may not be true [one previous bishop is known], it is nevertheless taken as evidence that Thorfinn's reign was a significant turning point for the earldom, [10] suggesting according to historian Ronald Cant "a deliberate plan on the part of the earl to perfect the organization of the church in Orkney". [11] Thorfinn and Thorulf's Christ Church has been identified with the Romanesque ruins on the tidal island known as Brough of Birsay, but there is also evidence that it was located over in the Mainland next to the Earl's palace. [12] 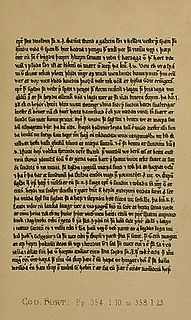 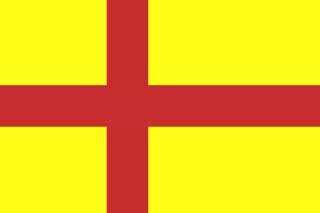 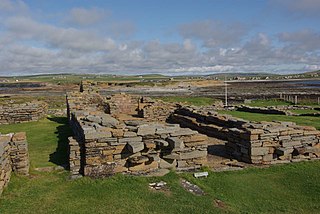 The Earl of Orkney was originally a Norse jarl ruling the archipelagos of Orkney and Shetland (Norðreyjar). Originally founded by Norse invaders, the status of the rulers of the Norðreyjar as Norwegian vassals was formalised in 1195. Although the Old Norse term jarl is etymologically related to "earl", and the jarls were succeeded by earls in the late 15th century, a Norwegian jarl is not the same thing. In the Norse context the distinction between jarls and kings did not become significant until the late 11th century and the early jarls would therefore have had considerable independence of action until that time. The position of Jarl of Orkney was eventually the most senior rank in mediaeval Norway except for the king himself. 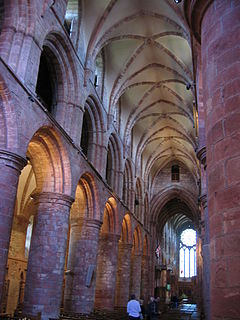 The Mormaer of Caithness was a vassal title mostly held by members of the Norwegian nobility based in Orkney from the Viking Age until 1350. The mormaerdom was held as fief of Scotland and the title was frequently held by the Norse Earls of Orkney, who were thus a vassal of both the King of Norway and the King of Scots. There is no other example in the history of either Norway or of Scotland in which a dynasty of earls owed their allegiance to two different kings.

John of Caithness is the second known bishop of Caithness, based then at Halkirk. He witnessed various charters in Scotland between the years 1187 and 1199.

Adam de Tyninghame was a 14th-century cleric and, as his name suggests, a probable native of Tyninghame in East Lothian. 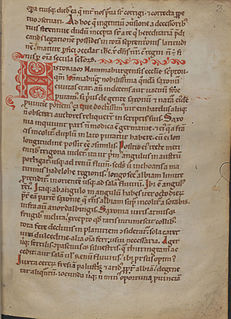 Gesta Hammaburgensis ecclesiae pontificum is a historical treatise written between 1073 and 1076 by Adam of Bremen, who made additions (scholia) to the text until his death . It is one of the most important sources of the medieval history of Northern Europe, and the oldest textual source reporting the discovery of coastal North America.

William the Old was a 12th-century prelate who became one of the most famous bishops of Orkney. Although his origins are obscure in detail, William was said to have been a "clerk of Paris". Saga tradition had it that William had been bishop for 66 years when he died in 1168, meaning that his accession to the bishopric would have been around 1102. There is no contemporary evidence of his episcopate until a letter of Pope Honorius II in 1128, which even then does not name William specifically, but rather only mentions a bishop holding office at the same time as Radulf Novell. He was however definitively in charge by December 1135 during the earldom of Earl Paul Haakonsson.

Karl Hundason, also Karl Hundisson, is a personage in the Orkneyinga Saga. The saga recounts a war between Thorfinn Sigurdsson, Earl of Orkney, and Karl, whom it calls king of Scots. The question of his identity and historicity has been debated by historians of Scotland and the Northern Isles for more than a century. However a literal translation suggests that the name may simply be an insult.

Ragnhild Eriksdotter was the daughter of Eric Bloodaxe and his wife, Gunnhild. According to the Orkneyinga Saga, she was an ambitious and scheming woman who sought power through the men of the family of Thorfinn Torf-Einarsson, who was Earl of Orkney. The period after Thorfinn's death was one of dynastic strife.

John was an 11th-century prelate. According to the Saxon writer Adam of Bremen, historian of the archbishops of Hamburg, John was sent to Orkney by Adalbert, Archbishop of Hamburg, to succeed Thorulf as Bishop of Orkney. According to Adam, he had previously been consecrated as a bishop in "Scotland".

Adalbert was an 11th-century prelate. Having been consecrated elsewhere, he is said by the Saxon writer Adam of Bremen to have been sent to become Bishop of Orkney by his namesake, Adalbert, Archbishop of Hamburg. He is mentioned as the successor of Bishop John.

Scandinavian Scotland refers to the period from the 8th to the 15th centuries during which Vikings and Norse settlers, mainly Norwegians and to a lesser extent other Scandinavians, and their descendants colonised parts of what is now the periphery of modern Scotland. Viking influence in the area commenced in the late 8th century, and hostility between the Scandinavian Earls of Orkney and the emerging thalassocracy of the Kingdom of the Isles, the rulers of Ireland, Dál Riata and Alba, and intervention by the crown of Norway were recurring themes.