Thotti Gang is a 2002 Telugu comedy film produced and directed by E. V. V. Satyanarayana starring Allari Naresh, Prabhu Deva, Sunil, Gajala and Anita Hassanandani in the lead roles. The movie was released on 6 December 2002 to positive reviews and was declared a super hit at the box office. The film was based on 2001 American film Saving Silverman . [1]

The film was dubbed and released in Tamil as Love Game with a separate comedy track featuring Livingston and Venniradai Moorthy.

Prabhu Deva is an Indian dance choreographer, film director, producer and actor who has worked predominantly in Tamil, Hindi, and Telugu language films. In a career spanning 32 years, he has performed and designed a wide range of dancing styles and has garnered two National Film Awards for Best Choreography. In 2019, he was awarded the Padma Shri for his contributions to dance. 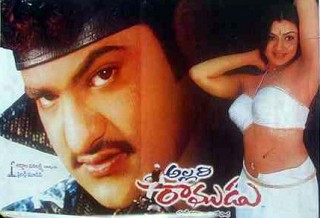 Allari Ramudu is a 2002 Indian Telugu-language action comedy film which starred N. T. Rama Rao Jr, Nagma, Gajala and Aarthi Agarwal. B. Gopal directed this film. It was dubbed into Hindi as Main Hoon Khuddar in 2007. It was remade in Bangladeshi Bengali as Number One Shakib Khan. 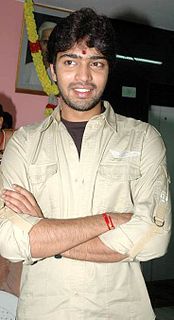 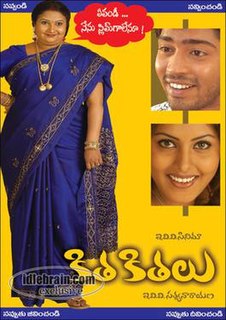 Kithakithalu is a 2006 Indian Telugu-language romantic comedy film starring Allari Naresh, Geetha Singh, Madhu Shalini and Jayalalitha. The film is made by Allari Naresh's home banner under the direction of his father E. V. V. Satyanarayana and fared well at the box office. Kithakitalu was made with a budget of 85 lakh and collected 9 crore at the box office. It's based on the Tamil movie Chinna Veedu. 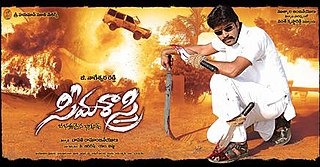 Sambo Siva Sambo is a 2010 Indian Telugu-language action drama film directed by Samuthirakani. It stars Ravi Teja, Allari Naresh, Siva Balaji, Priyamani, Abhinaya, and Surya Teja in the lead roles. This film is a remake of the director's 2009 film Naadodigal. The film released on 14 January 2010 to mixed responses from critics. Despite mixed reviews,the film performed well as the audience gave a thumbs up and was declared a box office hit. The film was later dubbed in Hindi as Mera Krodh in 2012. It was remade in Bengali as Run, starring Rahul, Priyanka. The film was remade in Hindi as Rangrezz, directed by Priyadarshan and starring Jackky Bhagnani, Priya Anand, Rajpal Yadav, Vijay Verma and Amitosh Nagpal. The film was remade in Kannada Hudugaru and in Malayalam as Ithu Nammude Katha.

Saradaga Kasepu is a Telugu comedy film starring Allari Naresh, Madhurima and Srinivas Avasarala in the lead roles, directed by Vamsy. The film was released on 17 September 2010. It is a remake of the 1986 Malayalam movie Mazha Peyyunnu Maddalam Kottunnu directed by Priyadarshan.

Action 3D is a 2013 Indian Telugu-language 3D comedy film directed by Anil Sunkara, starring an ensemble cast of Allari Naresh, Shaam, Vaibhav, and Raju Sundaram. The film was released on 21 June 2013. The film is based on The Hangover (2009).

Bandipotu (transl. Bandit) is a 2015 Indian Telugu language heist comedy film directed by Mohan Krishna Indraganti and features Allari Naresh and Eesha Rebba in the lead roles while Srinivas Avasarala, Posani Krishna Murali, Tanikella Bharani and Sampoornesh Babu appear in other pivotal roles. The film is produced by Aryan Rajesh on EVV Cinema banner and is titled based on the N. T. Rama Rao's 1963 film of the same name. Kalyani Koduri composed the music while P.G. Vinda and Dharmendra Kakarala handled the cinematography and editing of the movie respectively.

James Bond is a 2015 Telugu language action comedy film written and directed by Sai Kishore Macha and produced by Anil Sunkara under the banner A.K.Entertainments. It features Allari Naresh and Sakshi Chaudhary in the lead roles while Ashish Vidyarthi, Raghu Babu and Krishna Bhagavan appear in supporting roles. The movie is loosely based on the Korean movie My Wife Is a Gangster.

Chittajalu Lakshmipati was an Indian actor and writer from Andhra Pradesh who predominantly appeared in Telugu films, acting in over 70 of them. He was the elder brother of Sobhan, who directed the film Varsham. He died a few days after his brother's death.

Dhanalakshmi, I Love You is a 2002 Indian Telugu-language comedy film directed by Siva Nageswara Rao and starring Allari Naresh, Aditya Om, Naresh, and Ankitha. It is based on the Malayalam film Ramji Rao Speaking (1989).