Thousand Springs Creek is a stream in the U.S. states of Nevada and Utah. [1] It is a tributary to Grouse Creek. [1]

The stream headwaters arise in northeast Nevada on the east slope of the Snake Mountains and it flows east through the Dake Reservoir into northwest Utah to Grouse Creek 3.2 km (2.0 mi) northwest of Lucin. [1]

Thousand Springs Creek was named for the fact it is fed by many springs along its course. [2] 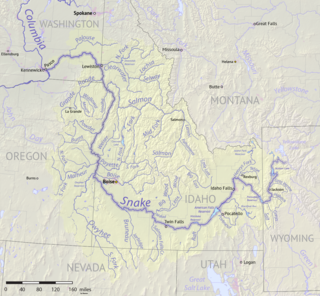 The Raft River is a 108-mile-long (174 km) tributary of the Snake River located in northern Utah and southern Idaho in the United States. It is part of the Columbia River Basin. 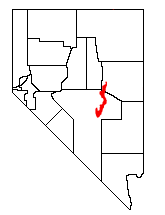 The Pancake Range is located in east-central Nevada in the United States. The range extends as an irregular sinuous line for approximately 90 miles (140 km) with a roughly north-south trend in Nye and White Pine counties. The range reaches an elevation of 9,240 feet (2,820 m) at Portuguese Mountain. Neighboring ranges include the White Pine, Grant and Quinn Canyon ranges across Railroad Valley on the east-southeast; and Park and Hot Creek ranges across Big Sandy Springs and Hot Creek valleys on the west-northwest. The south end of Newark Valley lies at the extreme north end of the range. The Lunar Crater Volcanic Field lies at the southwestern end of the chain with the Reveille Range to the south. 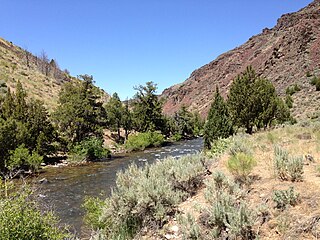 The Jarbidge River is a 51.8-mile-long (83.4 km), high elevation river in northern Nevada and southwest Idaho in the United States. The Jarbidge originates as two main forks in the Jarbidge Mountains of northeastern Nevada and then flows through basalt and rhyolite canyons on the high plateau of the Owyhee Desert before joining the Bruneau River.

The Beaver Dam Wash is a seasonal stream near the southwestern Utah-Nevada border in the United States. At its southern end in northern Arizona, near the point where it empties into the Virgin River, the stream flows throughout the year. Part of the wash is in the Beaver Dam Wash National Conservation Area, managed by the Bureau of Land Management. The wash was so named on account of beaver dams which once were built on its course.

Grouse Creek is an unincorporated community in the nearly unpopulated northwestern region of Box Elder County, Utah, United States, near the Idaho and Nevada borders. The community lies along unpaved roads north of State Route 30 in the Grouse Creek Mountains. Its elevation is 5,331 feet (1,625 m). Although it is unincorporated, it has a post office, with the ZIP code of 84313.

The Antelope Valley adjacent to the Nevada/Utah state line, and located in southeast Elko County and northeast White Pine County, Nevada is a 70 mi (113 km) long endorheic valley. The valley curves around the Dolly Varden and Kinsley Mountains, and the Antelope Range.

Hamlin Valley is a mostly north-south trending valley of the Great Basin located on both sides of the Nevada–Utah state line. It is about 60 miles (97 km) long. Its north-northeast end point adjacent the state line, is the southwest start region of the Snake Valley. 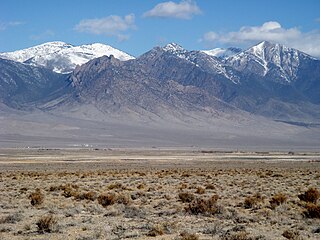 The Grouse Creek block is a Precambrian basement province of 2.45 to 2.70 billion year old orthogneisses. The Grouse Creek block is one of several Proterozoic and Archean accreted terranes that lie to the north and west of the Wyoming craton, including the Farmington Canyon Complex, the Selway terrane, the Medicine Hat block and the Priest River complex. Together, these terranes comprise part of the basement rock of the North American continent and have been critical to studies of crustal accretion in the Precambrian. Ongoing study of the Grouse Creek block will contribute to understanding the paleogeography of the Wyoming craton prior to its incorporation into the supercontinent Laurentia approximately 1.86 billion years ago. The name was proposed by David Foster and others.

Dalton Creek is a stream in Morgan County, Utah, United States. It is also located within the Uinta-Wasatch-Cache National Forest and its mouth is about 1.75 miles (2.82 km) southeast of Peterson.

Ferber Hills is a range of hills in Elko County, Nevada and Tooele County, Utah. The range is formed in three parallel ridges of hills trending northwest to southeast. Its highest summit is Utah Peak, in the center of the central ridge of the range, at an elevation of 6,680 feet / 2,036 meters, just east of the state line in Tooele County, Utah. Its second highest Summit is Ferber Peak, that rises to and elevation of 6,601 feet / 2,012 meters, at the south end of the southernmost ridge of the range at 40°12′43″N114°03′18″W just west of the state line in Elko County, Nevada. The highest point in the smaller northernmost ridge is an unnamed summit at 40°17′12″N113°59′48″W with an elevation of 5,745 feet / 1,751 meters in Tooele County.