The Thrasher incident, as it became known in the US media, nearly became the start of America's involvement in World War I. On March 28, 1915, the British steamship Falaba was torpedoed and sunk by German U-boat U-28. In the incident, 104 people were killed, including one American passenger, Leon Chester Thrasher, a 31-year-old mining engineer from Massachusetts.

On 4 Feb. 1915, the German Admiralty declared a war zone around Britain, with all ships in that zone to be targeted. Germany's 30 submarines then began sinking all vessels, whether belligerent or neutral. Though they had secret orders to spare American ships, a freighter and a tanker were sunk. Britain responded by tightening its blockade of Germany that included food. [1]

The British Admiralty instructed ships to steer away or to ram any submarine that they encountered. They were not to zigzag. [2]

The American government, led by US President Woodrow Wilson and US Secretary of State William Jennings Bryan, responded with a protest to the German government on 10 February. Wilson and Bryan called the German intention "an act so unprecedented in naval warfare" and that the US would hold the Germans to "a strict accountability for such acts of their naval authorities." [1] :275

On 27 March 1915, the Falaba of the Elder Dempster Lines left Liverpool for West Africa. She was operating with a crew of 95 and carried 147 passengers, one of whom was the American mining engineer Leon Chester Thrasher (sometimes spelled Thresher). In addition, the ship was carrying 13 tons of cartridges and gunpowder. [2] :78-79

On 28 March, at 1140, the conning tower of U-28, commanded by Kapitänleutnant von Forstner, was sighted by Chief Officer Walter Baxter. Captain Frederick Davies then ordered the Falaba to steer away at maximum speed. However, Davies then ordered them to stop and to send two wireless|wireless messages of their predicament, the result of the Germans warning the ship to "stop or I will fire." Forstner then ordered Davies to abandon the ship, as it was to be sunk. The evacuation was disorganized, which resulted in several casualties. A torpedo amidships sank the ship quickly. [2]

One of the 104 persons to die in the incident was Leon Thrasher, who was the first American to die from the action of a German submarine. [2] :80

Though Wilson thought international law had been violated, Bryan wondered "whether an American citizen can, by putting his business above his regard for his country, assume for his own advantage unnecessary risks and thus involve his country in international complications." The sinking of the Lusitania prompted the Americans to send a diplomatic note to the Germans asking for an apology and reparations for both ships. The note included a warning that the US would take "any necessary act in sustaining the rights of its citizens or in safeguarding the sacred duties of international law." [1] :277,288

After persistent requests by Bryan, documents detailing witness statements from the sinking of Falaba offered proof that the captain of U-28 gave adequate warnings and time for Falaba to offload passengers. Instead, the crew of Falaba had used that time to radio the position of the submarine to nearby armed British patrol ships. As the warship approached, the submarine fired at the last minute and detonated nearly thirteen tons of contraband high explosives in Falaba's cargo. [3]

Thrasher's remains washed ashore on Ireland's coast on July 11, 1915, after it had been in the water for 106 days. Initially, authorities mistook him for a RMS Lusitania victim and designated him Body No. 248. [4]

After reviewing Lord Mersey's investigation of the incident, Alastair Walker commented that "had the crew been well organized and the passengers well led, all of those on the ship could have been safely evacuated before the torpedo was fired. The sinking of the ship was down to von Forstner and U-28; responsibility for the loss of life, however lay with Elder, Dempster, their Marine Superintendent and his brother-in-law Fred Davies." [2] :172 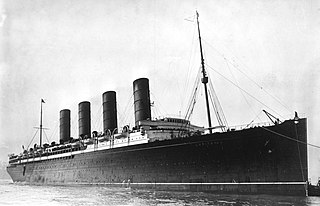 RMS Lusitania was a British ocean liner that was sunk on 7 May 1915 by a German U-boat 11 miles (18 km) off the southern coast of Ireland, killing 1,198 passengers and crew. The sinking presaged the United States declaration of war on Germany. Although the Lusitania sinking was a major factor in building support for a war, a declaration of war did not take place until nearly two years later, after repeated other attacks and German use of unrestricted warfare against American shipping. 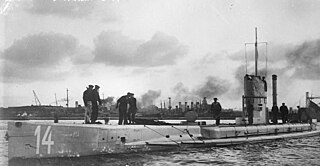 Unrestricted submarine warfare is a type of naval warfare in which submarines sink vessels such as freighters and tankers without warning, as opposed to attacks per prize rules. Prize rules call for submarines to surface and search merchantmen and place crews in "a place of safety" before sinking them, unless the ship showed "persistent refusal to stop ... or active resistance to visit or search". 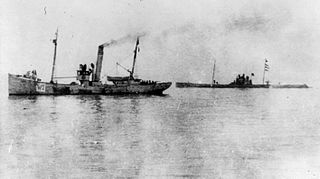 The Sussex Pledge was a promise made by Germany to the United States in 1916, during World War I before the latter entered the war. Early in 1915, Germany had instituted a policy of unrestricted submarine warfare, allowing armed merchant ships, but not passenger ships, to be torpedoed without warning. Despite this avowed restriction, a French cross-channel passenger ferry, the Sussex, was torpedoed without warning on March 24, 1916; the ship was severely damaged and about 50 people died. Although no US citizens were killed in this attack, it prompted President Woodrow Wilson to declare that if Germany were to continue this practice, the United States would break diplomatic relations with Germany. Fearing the entry of the United States into the war, Germany tried to appease the United States by issuing, on May 4, 1916, the Sussex pledge, which promised a change in Germany's naval warfare policy. These were the primary elements of the pledge:

Gulflight was an American 5,189-ton tanker built by the New York Shipbuilding Co. of Camden, New Jersey for the Gulf Refining Company. It was launched on 8 August 1914. The ship became famous when it was torpedoed early in World War I and became the center of a diplomatic incident which moved the United States closer to war with Germany. The ship survived the attack but was eventually sunk in 1942 by torpedo attack in World War II.

Falaba is a rural town in Solima chiefdom, Falaba District in the Northern Province of Sierra Leone. The population of Falaba is largely from the Yalunka, Kuranko and couple of Mandingo ethnic groups. Falaba is virtually all Muslim and it is known for its deeply religious Muslim population. Farming is the major economic activity in Falaba. 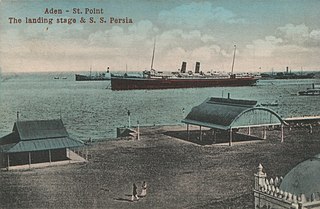 SS Persia was a P&O passenger liner, built in 1900 by Caird & Company, Inverclyde, Greenock, Scotland. It was torpedoed and sunk without warning on 30 December 1915, by German U-boat U-38. 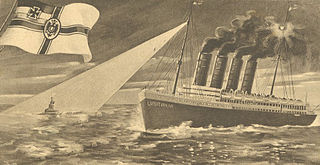 SM U-20 was a German Type U 19 U-boat built for service in the Imperial German Navy. She was launched on 18 December 1912, and commissioned on 5 August 1913. During World War I, she took part in operations around the British Isles. U-20 became infamous following her sinking of the British ocean liner RMS Lusitania on 7 May 1915, an act that dramatically reshaped the course of World War I.

SM U-27 was a German Type U-27 U-boat built for service in the Imperial German Navy. She was launched on 14 July 1913, and commissioned on 8 May 1914 with Kapitänleutnant Bernd Wegener in command.

Sinking of the Lusitania: Terror at Sea is an English-German docu-drama produced in 2007. This 90-minute film is a dramatisation of the sinking of the RMS Lusitania on 7 May 1915 by a German U-boat, U-20. The Lusitania scenes were filmed with full-scale sections of the ship off the coast of South Africa while the U-20 scenes were filmed at Bavaria Studios in Munich using the then-newly refurbished 25-year-old U-boat set, studio model and full-size prop originally built for Das Boot.

SS Robin Moor was a Hog Islander steamship that sailed under the American flag from 1919 until being sunk by German submarine U-69 on 21 May 1941, before the United States had entered World War II, after allowing the passengers and crew to board lifeboats. 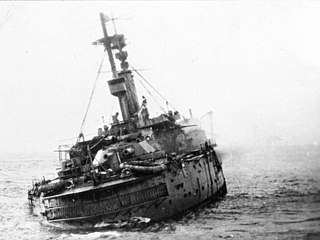 The Mediterranean U-boat Campaign in the Mediterranean Sea was fought by Austria-Hungary and German Empire against the Allies during World War I. It was characterised by the ability of the Central Powers to raid with near impunity during the first years of the war, causing substantial shipping losses, until the introduction of the convoy system allowed the Allies to drastically cut their losses from 1917 on.

SM UB-13 was a German Type UB I submarine or U-boat in the German Imperial Navy during World War I. The submarine was probably sunk by a British mine net in April 1916. 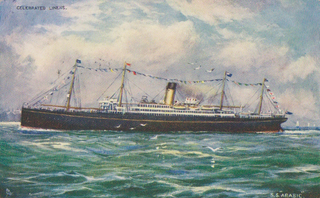 SS Arabic was a British-registered ocean liner that entered service in 1903 for the White Star Line. She was sunk on 19 August 1915, during the First World War, by German submarine SM U-24, 50 mi (80 km) south of Kinsale, causing a diplomatic incident.

The U-boat Campaign from 1914 to 1918 was the World War I naval campaign fought by German U-boats against the trade routes of the Allies. It took place largely in the seas around the British Isles and in the Mediterranean. The German Empire relied on imports for food and domestic food production and the United Kingdom relied heavily on imports to feed its population, and both required raw materials to supply their war industry; the powers aimed, therefore, to blockade one another. The British had the Royal Navy which was superior in numbers and could operate on most of the world's oceans because of the British Empire, whereas the Imperial German Navy surface fleet was mainly restricted to the German Bight, and used commerce raiders and unrestricted submarine warfare to operate elsewhere. 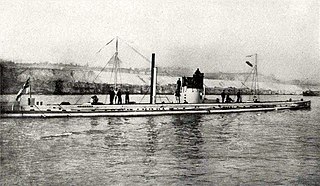 The Atlantic U-boat campaign of World War I was the prolonged naval conflict between German submarines and the Allied navies in Atlantic waters—the seas around the British Isles, the North Sea and the coast of France.

Raimund Weisbach was an officer of the Kaiserliche Marine, and a U-boat commander during the First World War. He was the torpedo officer on the German U-boat, the U-20, who saw to the preparation and firing of the torpedo that sank the RMS Lusitania on 7 May 1915. He went on to become a successful commander, sinking 36 ships before being captured when his submarine was sunk by the Royal Navy.

SM U-30 was one of 329 U-boat submarines serving in the Imperial German Navy in World War I. She engaged in commerce warfare as part of the First Battle of the Atlantic. U-30 is significant for the torpedoing of the US tanker Gulflight on 1 May 1915 20 nautical miles west of Scilly.

Commander William Thomas Turner, OBE, RNR was a British captain. He is best known as the captain of RMS Lusitania when she was sunk by a German torpedo in May 1915. 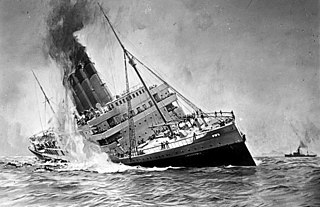 The sinking of the Cunard ocean liner RMS Lusitania occurred on Friday, 7 May 1915 during the First World War, as Germany waged submarine warfare against the United Kingdom which had implemented a naval blockade of Germany. The ship was identified and torpedoed by the German U-boat U-20 and sank in 18 minutes, and also took on a heavy starboard list. The vessel went down 11 miles (18 km) off the Old Head of Kinsale, Ireland, killing 1,198 and leaving 761 survivors. The sinking turned public opinion in many countries against Germany, contributed to the American entry into World War I and became an iconic symbol in military recruiting campaigns of why the war was being fought.