Last updated December 21, 2021
Rod with ridges wrapped around it

A threaded rod, also known as a stud, is a relatively long rod that is threaded on both ends; the thread may extend along the complete length of the rod. [1] They are designed to be used in tension. [2] Threaded rod in bar stock form is often called all-thread.

Studs may have a drive slot in one end to facilitate installing the stud.

Undercut studs are only required in applications where the stud is exposed to fatigue. Cut threads are entirely suitable for many applications, even when rolled threads might be slightly stronger. Mass-produced fasteners (standard bolts and studs) are usually rolled, but jobbed parts with custom features and small lot sizes are likely to be cut.

where d is the nominal diameter, and Fu is the ultimate tensile strength of the material. For undercut threaded rods the allowable tensile stress is defined as [6]

where ds is the diameter of the shank, and Fy is the yield strength of the material.

Both equations give units of force for the result, i.e. pounds-force or newtons.

Metric threaded rods are marked on the end with a color code to define the ISO strength class. The color codes are: [7]

A tie rod or tie bar is a slender structural unit used as a tie and capable of carrying tensile loads only. It is any rod or bar-shaped structural member designed to prevent the separation of two parts, as in a vehicle. 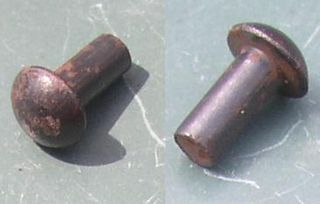 American National Standard Pipe Thread standards, often called national pipe thread standards for short, are U.S. national technical standards for screw threads used on threaded pipes and pipe fittings. They include both tapered and straight thread series for various purposes, including rigidity, pressure-tight sealing, or both. The types are named with a symbol and a full name. Examples of the symbols include NPT, NPS, NPTF, NPSC.

A dowel is a cylindrical rod, usually made of wood, plastic, or metal. In its original manufactured form, a dowel is called a dowel rod. Dowel rods are often cut into short lengths called dowel pins. Dowels are commonly used as structural reinforcements in cabinet making and in numerous other applications, including: 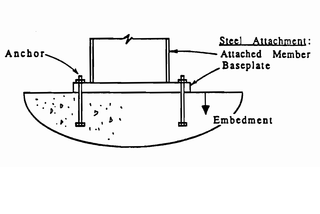 Anchor bolts are used to connect structural and non-structural elements to concrete. The connection can be made by a variety of different components: anchor bolts, steel plates, or stiffeners. Anchor bolts transfer different types of load: tension forces and shear forces.

In solid mechanics, shearing forces are unaligned forces pushing one part of a body in one specific direction, and another part of the body in the opposite direction. When the forces are colinear, they are called compression forces. An example is a deck of cards being pushed one way on the top, and the other at the bottom, causing the cards to slide. Another example is when wind blows at the side of a peaked roof of a house - the side walls experience a force at their top pushing in the direction of the wind, and their bottom in the opposite direction, from the ground or foundation. William A. Nash defines shear force in terms of planes: "If a plane is passed through a body, a force acting along this plane is called a shear force or shearing force."

Multi-jackbolt tensioners (MJT) are an alternative to traditional bolted joints. Rather than needing to tighten one large bolt, MJTs use several smaller jackbolts to significantly reduce the torque required to attain a certain preload. MJTs range in thread sizes from 3⁄4 in (19 mm) to 32 in (810 mm) and can achieve 20 million pounds-force or more. MJTs only require hand-held tools, such as torque wrenches or air/electric impacts, for loading and unloading bolted joints.

A swage nut or self-clinching nut is a type of nut or threaded insert that is used on sheet metal.

ASTM F568M is an ASTM International standard for metric bolts, screws and studs that are used in general engineering applications. It is titled: Standard Specification for Carbon and Alloy Steel Externally Threaded Metric Fasteners. It defines mechanical properties for fasteners that range from M1.6 to 100 in diameter. The standard was withdrawn in 2012. and has been replaced by ISO 898-1