Three-dimensional losses and correlation in turbomachinery

Three-dimension losses and correlation in turbomachinery refers to the measurement of flow-fields in three dimensions, where measuring the loss of smoothness of flow, and resulting inefficiencies, becomes difficult, unlike two-dimensional losses where mathematical complexity is substantially less.

Three-dimensionality takes into account large pressure gradients in every direction, design/curvature of blades, shock waves, heat transfer, cavitation, and viscous effects, which generate secondary flow, vortices, tip leakage vortices, and other effects that interrupt smooth flow and cause loss of efficiency. Viscous effects in turbomachinery block flow by the formation of viscous layers around blade profiles, which affects pressure rise and fall and reduces the effective area of a flow field. Interaction between these effects increases rotor instability and decreases the efficiency of turbomachinery.

Two-dimensional losses are easily evaluated using Navier-Stokes equations, but three-dimensional losses are difficult to evaluate; so, correlation is used, which is difficult with so many parameters. So, correlation based on geometric similarity has been developed in many industries, in the form of charts, graphs, data statistics, and performance data.

Three-dimensional losses are generally classified as:

where η=efficiency in absence of endwall boundary layer, where h refers to the hub and t refers to the tip. The values of Fθ and δ* are derived from the graph or chart. 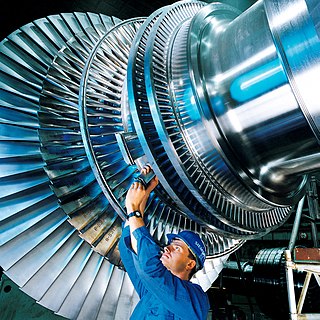 The Tesla turbine is a bladeless centripetal flow turbine patented by Nikola Tesla in 1913. It is referred to as a bladeless turbine. The Tesla turbine is also known as the boundary-layer turbine, cohesion-type turbine, and Prandtl-layer turbine because it uses the boundary-layer effect and not a fluid impinging upon the blades as in a conventional turbine. Bioengineering researchers have referred to it as a multiple-disk centrifugal pump. One of Tesla's desires for implementation of this turbine was for geothermal power, which was described in Our Future Motive Power.

The turbofan or fanjet is a type of airbreathing jet engine that is widely used in aircraft propulsion. The word "turbofan" is a portmanteau of "turbine" and "fan": the turbo portion refers to a gas turbine engine which achieves mechanical energy from combustion, and the fan, a ducted fan that uses the mechanical energy from the gas turbine to accelerate air rearwards. Thus, whereas all the air taken in by a turbojet passes through the turbine, in a turbofan some of that air bypasses the turbine. A turbofan thus can be thought of as a turbojet being used to drive a ducted fan, with both of these contributing to the thrust. 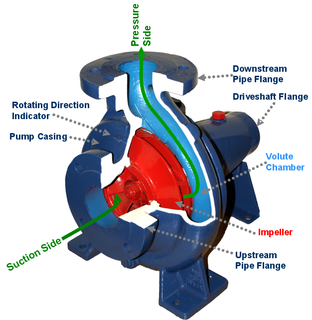 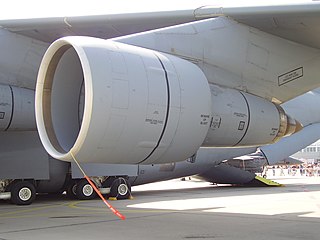 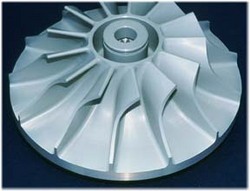 Industrial fans and blowers are machines whose primary function is to provide and accommodate a large flow of air or gas to various parts of a building or other structures. This is achieved by rotating a number of blades, connected to a hub and shaft, and driven by a motor or turbine. The flow rates of these mechanical fans range from approximately 200 cubic feet (5.7 m3) to 2,000,000 cubic feet (57,000 m3) per minute. A blower is another name for a fan that operates where the resistance to the flow is primarily on the downstream side of the fan.

In fluid dynamics, a secondary flow is a relatively minor flow superimposed on the primary flow, where the primary flow usually matches very closely the flow pattern predicted using simple analytical techniques that assume the fluid is inviscid.

Dr. Cheng Xu is a Chinese American aerodynamic design engineer and engineering manager. He is a Fellow of the American Society of Mechanical Engineers and a member of the Technical Committee on Energy and Power Systems, IASTED. He also served as a guest editor of International Journal of Rotating Machinery.

Compressor characteristic is the curve to show the behaviour of fluid, like change in pressure, temperature, entropy, flow rate etc. as it passes through a Dynamic compressor at different compressor speeds. The function of a compressor is to increase the pressure of a fluid passing through it, so that the exit pressure is higher than the inlet pressure. Due to this property, compressors are used in a wide range of machines, such as refrigerators, cars, jet engines and industrial processes. These curves are plotted between various parameters and some are as follows

In turbomachinery, the slip factor is a measure of the fluid slip in the impeller of a compressor or a turbine, mostly a centrifugal machine. Fluid slip is the deviation in the angle at which the fluid leaves the impeller from the impeller's blade/vane angle. Being quite small in axial impellers(inlet and outlet flow in same direction), slip is a very important phenomenon in radial impellers and is useful in determining the accurate estimation of work input or the energy transfer between the impeller and the fluid, rise in pressure and the velocity triangles at the impeller exit.

Blade solidity is an important design parameter for the axial flow impeller and is defined as the ratio of blade chord length to pitch.

Joseph Katz is an Israel-born American fluid dynamicist, known for his work on experimental fluid mechanics, cavitation phenomena and multiphase flow, turbulence, turbomachinery flows and oceanography flows, flow-induced vibrations and noise, and development of optical flow diagnostics techniques, including Particle Image Velocimetry (PIV) and Holographic Particle Image Velocimetry (HPIV). As of 2005, he is the William F. Ward Sr. Distinguished Professor at the Department of Mechanical Engineering of the Whiting School of Engineering at the Johns Hopkins University.