Three-dimensional quartz phenolic (3DQP) [1] is a phenolic-based material composed of a quartz cloth material impregnated with a phenolic resin and hot-pressed. When cured, 3DQP can be machined in the same way as metals and is tough and fire-resistant. 3DQP is used for the manufacture of nuclear weapon re-entry vehicles (RV).

3DQP was first used on the British Chevaline improved front end (IFE) for the Royal Navy's UGM-27 Polaris system that was in service from 1982 to 1996, when it was replaced by Trident D5.

A licence to manufacture 3DQP in the US was acquired from the British Government and production was undertaken by AVCO, one of the two suppliers of US RVs, the other being General Electric. First production examples of the Chevaline ReBs were manufactured by AVCO, now part of Textron. Subsequently, production was undertaken in the UK at the Royal Ordnance Factory Burghfield using quartz material purchased from France. [3] Documents declassified in 2013 describe in some detail the process whereby a quartz two-dimensional cloth is hand woven from quartz threads with conventional wefts and warps within a stainless steel matrix before being impregnated under pressure with a phenolic resin. A third dimension was then woven through the cavities created by removal of the stainless steel matrix before these threads were impregnated with phenolic resin inside an autoclave pressurised at up to 2000 psi. The resulting material was then lathe-turned to the ReB profile, internally and externally. [4]

The supply by AVCO of test samples of 3DQP to France without UK permission caused friction between the British Government and AVCO, and action in the US courts by the British government. [5] 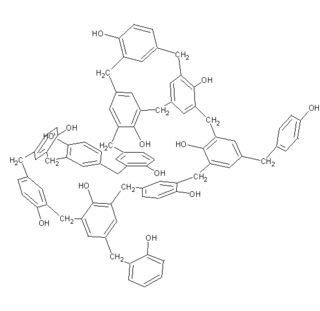 Bakelite or polyoxybenzylmethylenglycolanhydride was the first plastic made from synthetic components. It is a thermosetting phenol formaldehyde resin, formed from a condensation reaction of phenol with formaldehyde. It was developed by the Belgian-American chemist Leo Baekeland in Yonkers, New York, in 1907.

The UGM-27 Polaris missile was a two-stage solid-fueled nuclear-armed submarine-launched ballistic missile. The United States Navy's first SLBM, it served from 1961 to 1996.

A multiple independently targetable reentry vehicle (MIRV) is a missile payload containing several warheads, each capable of being aimed to hit a different target. The concept is almost invariably associated with intercontinental ballistic missiles carrying thermonuclear warheads, even if not strictly being limited to them. By contrast, a unitary warhead is a single warhead on a single missile. An intermediate case is the multiple reentry vehicle (MRV) missile which carries several warheads which are dispersed but not individually aimed. Only China, France, Russia, the United Kingdom, Pakistan and the United States are currently confirmed to possess functional MIRV missile systems. India and Israel are known or suspected to be developing or possessing MIRVs. 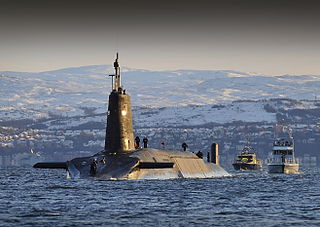 The Vanguard class is a class of nuclear-powered ballistic missile submarines (SSBNs) in service with the Royal Navy. The class was introduced in 1994 as part of the Trident nuclear programme, and includes four boats: Vanguard, Victorious, Vigilant and Vengeance. They were built between 1986 and 1999 at Barrow-in-Furness by Vickers Shipbuilding and Engineering, which is now owned by BAE Systems. All four boats are based at HM Naval Base Clyde , 40 km (25 mi) west of Glasgow, Scotland.

Chevaline was a system to improve the penetrability of the warheads used by the British Polaris nuclear weapons system. Devised as an answer to the improved Soviet anti-ballistic missile defences around Moscow, the system increased the probability that at least one warhead would penetrate Moscow's anti-ballistic missile (ABM) defences, something which the Royal Navy's earlier UGM-27 Polaris re-entry vehicles (RV)s were thought to be unlikely to do.

Formica laminate is a laminated composite material invented at the Westinghouse Electric Corporation in the United States in 1912. Originally used to replace mica in electrical applications, it has since been manufactured for a variety of applications. Today, the product is produced by New Zealand–based Formica Group, and has been since 2007. The word Formica refers to the company's classic product: a heat-resistant, wipe-clean laminate of paper or textile with melamine resin.

The WE.177, originally styled as WE 177, and sometimes simply as WE177, was a series of tactical and strategic nuclear weapons equipping the Royal Navy (RN) and the Royal Air Force (RAF). It was the primary air-dropped nuclear weapon in the UK from the late 1960s into the 1990s.

Polaris is a star, also known as the North Star. 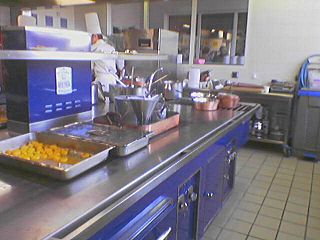 A countertop is a horizontal work surface in kitchens or other food preparation areas, bathrooms or lavatories, and workrooms in general. It is frequently installed upon and supported by cabinets. The surface is positioned at an ergonomic height for the user and the particular task for which it is designed. A countertop may be constructed of various materials with different attributes of functionality, durability, and aesthetics. The countertop may have built-in appliances, or accessory items relative to the intended application.

According to researcher Chuck Hansen, the W34 Python was a gas-boosted fission primary used in several designs of American thermonuclear weapons.

Kinglet was a boosted fission primary used in two designs of American thermonuclear weapons, the W55 and the W58; and was also adapted by the British as a super-hardened primary known as Harriet used in the Chevaline improvements to the British Polaris A-3TK missile. 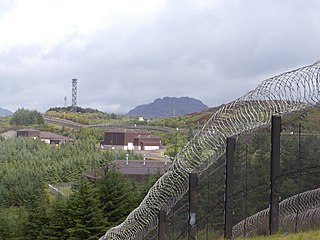 Royal Naval Armaments Depot Coulport, shortened to RNAD Coulport, on Loch Long in Argyll, Scotland, is the storage and loading facility for the nuclear warheads of the United Kingdom's Trident programme.

AVCOAT 5026-39 is a NASA code for a specific ablative heat shield material created by Avco . It is an epoxy novolac resin with special additives in a fiberglass honeycomb matrix. In fabrication, the empty honeycomb is bonded to the primary structure and the resin is gunned into each cell individually.

ET.317 was a thermonuclear weapon of the British Royal Navy, developed for the UK version of the UGM-27 Polaris missile.

Matthew Charles Jones is professor of international history at the London School of Economics. Jones is a specialist in British foreign and defence policy since the Second World War, British decolonization and South East Asia, the Vietnam War, nuclear history during the Cold War, American foreign relations since 1941 and Anglo-American relations.

Kate Pyne was an English historian working at the Atomic Weapons Establishment (AWE), Aldermaston. Her work there included the writing of technical history on various aspects of the British nuclear weapons programme from its earliest days to the present time. Prior to taking a degree in Modern History at Queen Mary and Westfield College, University of London, she worked for many years in the aircraft industry.