Three Brothers is part of the Private Snafu series of animated shorts produced by Warner Bros. during World War II. Screened for troops in September 1944, the cartoon was directed by Friz Freleng and features the familiar voice of Mel Blanc.

Private Snafu is seen performing the tedious task of sorting boots. Driven to madness by boredom he is taken to visit his brothers Tarfu and Fubar by the gruff Technical Fairy, First Class, somewhat in the spirit of Ebenezer Scrooge and the Ghosts of Christmas. Brother Tarfu is seen tending to the every need of carrier pigeons while brother Fubar is the unlucky dummy used in training attack dogs. After seeing his brothers' terrible jobs Private Snafu returns to work with gusto, exclaiming that his job is important.

SNAFU is an acronym that is widely used to stand for the sarcastic expression Situation Normal: All Fucked Up. It is a well-known example of military acronym slang; however the original military acronym stood for "Status Nominal: All Fucked Up". It is sometimes bowdlerized to "all fouled up" or similar. It means that the situation is bad, but that this is a normal state of affairs. The acronym is believed to have originated in the United States Marine Corps during World War II.

In computer science, augmented Backus–Naur form (ABNF) is a metalanguage based on Backus–Naur form (BNF), but consisting of its own syntax and derivation rules. The motive principle for ABNF is to describe a formal system of a language to be used as a bidirectional communications protocol. It is defined by Internet Standard 68, which as of December 2010 is RFC 5234, and it often serves as the definition language for IETF communication protocols.

Private Snafu is the title character of a series of black-and-white American instructional adult animated shorts, ironic and humorous in tone, that were produced between 1943 and 1945 during World War II. The films were designed to instruct service personnel about security, proper sanitation habits, booby traps and other military subjects, and to improve troop morale. Primarily, they demonstrate the negative consequences of doing things wrong. The main character's name is a play on the military slang acronym SNAFU, "Situation Normal: All Fucked Up." 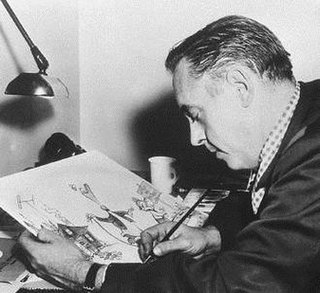 Warner Bros. Cartoons, Inc. was the in-house division of Warner Bros. during the Golden Age of American animation. One of the most successful animation studios in American media history, it was primarily responsible for the Looney Tunes and Merrie Melodies theatrical cartoon short subjects. The characters featured in these cartoons, including Bugs Bunny, Daffy Duck, Porky Pig, Sylvester and Tweety, are among the most famous and recognizable characters in the world. Many of the creative staff members at the studio, including directors and animators such as Chuck Jones, Friz Freleng, Robert McKimson, Tex Avery, Robert Clampett, Arthur Davis and Frank Tashlin, are considered major figures in the art and history of traditional animation.

The Army–Navy Screen Magazine was a bi-weekly short film series which was shown to American military personnel around the world during World War II. It included a newsreel and a cartoon of Private Snafu. Originally titled The War when first released in May 1943, it was renamed after ten episodes. A total of fifty issues were produced until early 1946 by the Army Signal Corps under the supervision of director Frank Capra. The Private Snafu series was designated classified and were produced by Leon Schlesinger Productions/Warner Bros. Cartoons, UPA, MGM, and Harman-Ising Studio. 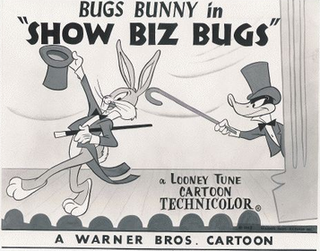 Robert Cameron Bruce Jr. was an American voice actor, and the son of Robert Cameron Bruce (1887–1948) who was a cinematographer and documentary producer. He was the narrator for a number of Warner Bros. cartoons in the 1930s and 1940s. The Looney Tunes and Merrie Melodies series' had occasional entries which were driven not by one of their stable of stars such as Bugs Bunny or Daffy Duck, but by individual short sketches, usually filled with sight gags and word-play. Later he was a writer and producer of industrial motion pictures based in Minnesota.

Rumors is part of the Private Snafu series of animated shorts produced by Warner Bros. during World War II. Released in 1943, the cartoon was directed by Friz Freleng.

Spies is part of the Private Snafu series of animated shorts produced by Warner Bros. during World War II. Released in 1943, the cartoon was directed by Chuck Jones and features the vocal talents of Mel Blanc. It was included as part of the International Spy Museum exhibits, specifically the exhibit showcasing World War II-era spying.

Going Home is part of the Private Snafu series of animated shorts produced by Warner Bros. during World War II. Made in 1944, the cartoon features the vocal talents of Mel Blanc and was directed by Chuck Jones. The script writers for the Snafu cartoons were typically uncredited, though animation historians consider that the scriptwriter of this short was Dr. Seuss. 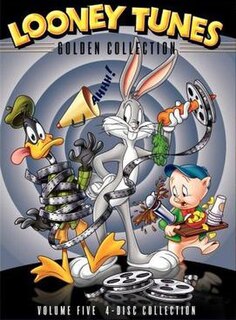 Looney Tunes Golden Collection: Volume 5 is a Looney Tunes collection on DVD. Following the pattern of one release each year of the previous volumes, it was released on October 30, 2007.

Snafuperman is a 1944 animated short comedy produced by Warner Bros. and directed by Friz Freleng. It is one of a series of black and white "Private Snafu" cartoons created for the Army-Navy Screen Magazine and shown only to American soldiers. The "Private Snafu" cartoons were not released commercially, until December 2010. The cartoon's title is a play on "Superman" and parodies the popular Superman cartoons of the 1940s.

World War II changed the possibilities for animation. Prior to the war, animation was seen as a form of childish entertainment. The attack on Pearl Harbor was a turning point in its utility. On December 8, 1941, the U.S. Army began working with Walt Disney at his studio, stationing Military personnel there for the duration of the war. The Army and Disney set about making various types of films for several different audiences. Most films meant for the public included some type of propaganda, while films for the troops included training and education about a given topic.

Private Snafu in The Aleutians—Isles of Enchantment is a short cartoon in the Private Snafu series, directed by Chuck Jones. Warner Bros. produced this film for the United States armed forces and issued it to service branches in February 1945, to inform personnel posted in the Aleutian Islands of what was then the Alaska Territory.

Gas is an animated short, directed by Chuck Jones and first released in May, 1944. It features Private Snafu learning the value of a gas mask in warfare. The cartoon was produced by Warner Bros. Cartoons. The script writers for the Snafu cartoons were typically uncredited, though animation historians consider that several of them were written or co-written by Dr. Seuss and Munro Leaf.

Payday is an animated short film, directed by Friz Freleng and first released in September, 1944. It is part of the Private Snafu series. As in all the Snafu films, the voice of Private Snafu is performed by Mel Blanc.