The Three Pigeons was a prominent and famous [5] meeting place in Bergen Township, New Jersey during the revolutionary period, and was used historically as a landmark as well as a popular place for hosting special occasions.

The Three Pigeons stood at the bottom of the west side of the Hudson Palisades, east of a main road that was later to be the Hackensack Turnpike, [6] and currently Bergen Turnpike. The two-story building [2] was located near the southern fringe of the settlement of Maisland near the intersection of what is now Tonnelle Avenue and Hackensack Plank Road, [6] [7] within modern North Bergen, New Jersey., [8] [9] Today, the intersection is called "Six Corners", where a laundromat and cafe share the same name, in the residential and commercial neighborhood called New Durham.

By the time the inn was erected, the name Three Pigeons had been used repeatedly in plays as the backdrop for scenes, for instance in She Stoops to Conquer (1773), Shakespeare's The Merry Wives of Windsor (1602) and Ben Jonson's The Alchemist (1610). Later literary scenes involving a "Three Pigeons" appear in Creatures of Impulse (1870) and Charles Dickens' Our Mutual Friend (1864–65), [10] as well as in actual inns, such as the English Shakespearian actor John Lowin's "The Three Pigeons" at Brentford. [11] It has been said that the name "Three Pigeons" in any of its variants may have more literary associations than any other tavern name. [10] Many other inns and taverns in England still use this name today.

The earliest account is of a tavern keeper, William Earle who was born in 1690, [12] and flourished in the early 18th century. Prior to the American Revolution, the Three Pigeons Tavern was well known in the area [4] during the colonial era where the community in New Durham was located, as can be seen in the map below printed 1776. Along with Snake Hill and Priors' Mills, Three Pigeons made up one of three prominent land points in Hudson County; with the Three Pigeons namely being a site well referenced in describing proximity at the time as well. [13] [14] It has been said that General Washington had also spent time at the Three Pigeons, [15] likely before and during the years of the revolution.

On March 14, 1779, Colonel Van Buskirk, a British loyalist in the New Jersey Volunteers received intelligence that a party of Carolina Troops, along with a Captain and Lieutenant were at the Three Pigeons. Van Buskirk dispatched the Fourth Battalion and a lieutenant to approach the building, but the rebels were able to escape into the Bergen Woods. They were chased for 12 miles, and in the end after shots were exchanged, 2 rebels were captured as prisoners. [14]

Months later, during the Battle of Paulus Hook, Major Light Horse Harry Lee along with Captain Handy and the rest of his men moved towards Douwe's Ferry at the Hackensack River to cross with prisoners, only to find no boats, leaving Lee to return the way he came from fear of capture [16] if remaining like sitting ducks. After diverting back, Lee picked up 50 of his lost Virginians at the Three Pigeons and assigned them as flankers. Then at Fort Lee Ferry Road, Lee's troops, as decided by Lord Stirling, were reinforced by Colonel Henry Ball along with 200 additional troops, and soon after were attacked unsuccessfully by Van Buskirk and his Tories from within the Bergen woods. By August 19, Lee led his troops and 159 prisoners safely to New Bridge. [16] One Captain Meals was captured at the Three Pigeons, and on him were found the positions and orders of Lee's command relating to the attack and march at Paulus Hook. [17]

Finally, on October 20, Lee met for the last time with John Champe, a double agent chosen by George Washington and Lee himself in an attempt to capture the American traitor Benedict Arnold, [18] sent Champe up the road up towards the Three Pigeons, and worked to give him a start of about an hour and a quarter before he would release the information of Champe's whereabouts to the dragoons. [19] Just above the Three Pigeons, [20] Champe and the dragoons simultaneously spotted each other; troopers then began pursuit of Champe, but were unsuccessful [21] as Champe had jumped into the Hudson and was picked up by a British boat, claiming to seek British protection in New York City.

Also during the revolution, a British adherent who had tried to visit his family was captured at the Three Pigeons [13] and was subsequently killed.

For local Bergen and regional elections, the Three Pigeons was used as a voting house for the mayoral elections from 1804 through 1806; it would open there during these years and close at Peter Stuyvesant's, [22] another local tavern on the southwest corner of Bergen and Glenwood Avenues. James Gore King, a prominent businessmen and Whig Party politician endorsed General Winfield Scott's bid for presidency, a fellow whig, and gave a speech in support at the Three Pigeons in 1852. [2] It had been used repeatedly during the remainder of the 19th century as a landmark for describing official government and military positions, [23] [24] as well as in deed purchases. [25] Finally in 1893, the Three Pigeons was destroyed. [26]

Route 5 is a 3.18-mile (5.12 km) state highway located entirely in Bergen County, New Jersey, United States. It runs from U.S. Route 1/9 (US 1-9) in Ridgefield east down the New Jersey Palisades to end at County Route 505 at the Hudson River in Edgewater. The route is a two- to four-lane undivided highway its entire length, passing mostly through wooded residential neighborhoods. The route passes under Route 63 in Palisades Park, with access to that route provided by Bergen Boulevard, and intersects the southern terminus of Route 67 in Fort Lee.

Paterson Plank Road is a road that runs through Passaic, Bergen and Hudson Counties in northeastern New Jersey. The route, originally lain in the colonial era, connects the city of Paterson and the Hudson River waterfront. It has largely been superseded by Route 3, but in the many towns it passes it has remained an important local thoroughfare, and in some cases been renamed. 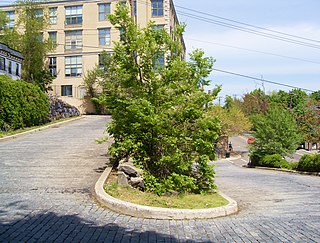 The Hackensack Plank Road, also known as Bergen Turnpike, was a major artery which connected the cities of Hoboken and Hackensack, New Jersey. Like its cousin routes, the Newark Plank Road and Paterson Plank Road, it travelled over Bergen Hill and across the Hackensack Meadows from the Hudson River waterfront to the city for which it was named. It was originally built as a colonial turnpike road as Hackensack and Hoboken Turnpike. The route mostly still exists today, though some segments are now called the Bergen Turnpike. It was during the 19th century that plank roads were developed, often by private companies which charged a toll. As the name suggests, wooden boards were laid on a roadbed in order to prevent horse-drawn carriages and wagons from sinking into softer ground on the portions of the road that passed through wetlands. The company that built the road received its charter on November 30, 1802. The road followed the route road from Hackensack to Communipaw that was described in 1679 as a "fine broad wagon-road." 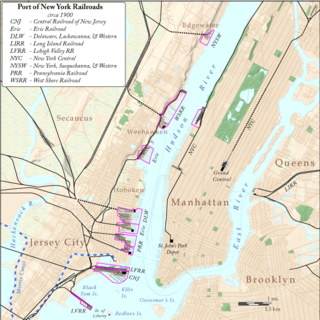 Bergen Hill refers to the lower Hudson Palisades in New Jersey, United States, where they emerge on Bergen Neck, which in turn is the peninsula between the Hackensack and Hudson River, and their bays. In Hudson County, it reaches a height of 260 feet.

The Hudson Waterfront is an urban area of northeastern New Jersey along the lower reaches of the Hudson River, the Upper New York Bay and the Kill van Kull. Though the term can specifically mean the shoreline, it often used to mean the contiguous urban area between the Bayonne Bridge and the George Washington Bridge that is approximately 19 miles (31 km) long. Historically, the region has been known as Bergen Neck, the lower peninsula, and Bergen Hill, lower Hudson Palisades. It has sometimes been called the Gold Coast.

Schuetzen Park is a privately owned park in North Bergen, New Jersey, United States, that has existed since 1872 and is located on the ridge of the Hudson Palisades at Kennedy Boulevard and Bergen Turnpike just north of the Marginal Highway. Its southern and western perimeters are shared with the Fritz Reuter Altenheim, a retirement community named for the German author, Fritz Reuter, and Columbia Park, a large shopping center. The German-American Volksfest has taken place there annually since its construction.

New Durham is an unincorporated community and neighborhood located within North Bergen Township in Hudson County, New Jersey, United States. It is located near the foot of Union Turnpike and Bergen Turnpike, and south of the Tonnelle Avenue Station of the Hudson Bergen Light Rail. It is one of the few residential areas along the otherwise industrial/commercial Tonnelle Ave, and site of one the town's main offices. 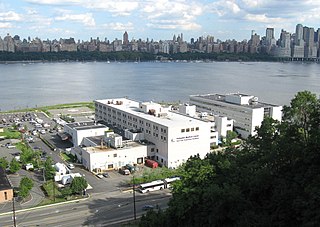 Bulls Ferry is an area along the Hudson River, just north of Weehawken Port Imperial in the towns of West New York, Guttenberg and North Bergen in New Jersey. It takes its name from a pre-Revolutionary settlement belonging to the Bull family, who operated a row-and-sail ferry to the burgeoning city of New York across the river. 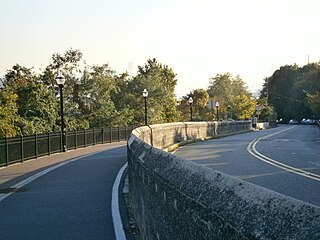 Pershing Road travels for 0.42 miles (0.68 km) on the Hudson Palisades in Weehawken, New Jersey between Boulevard East and Weehawken Port Imperial and carries the designation Hudson County Route 682. At County Route 505, the road meets 48th Street, one of the very few two-way streets in the urban grid of North Hudson, which travels west to Bergenline Avenue and Kennedy Boulevard. It is named for World War I hero John J. Pershing. Earlier names have included Clifton Road, named for the estate on whose land it was located, and Hillside Road, which would speak to its location. 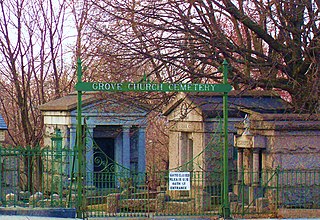 The Grove Church Cemetery is a nonsectarian cemetery, located on the western slope of the Hudson Palisades, along with several other cemeteries in a string of green open space, in Hudson County, New Jersey, United States. The Grove Church, who owns the cemetery, is one of the oldest religious bodies in the area, and it has had an operating cemetery since 1847. Throughout its history, prominent families have been buried there, as well as American Civil war veterans. There have also been reports of vandalism and misuse of the property since the 19th century, and in 2007 some of the cemetery grounds were occupied by the homeless. 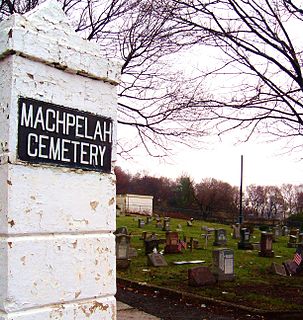 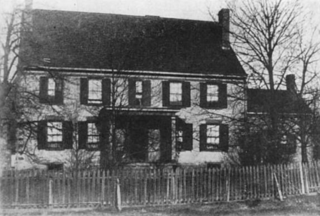 Jannetje Van Reypen Tuers was a patriot during the American Revolutionary War and had a role in confirming information about a British conspiracy with Benedict Arnold to take over West Point. 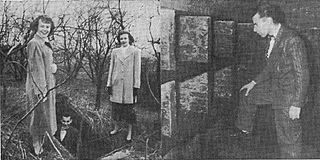 The Abel I. Smith Burial Ground was a family burial plot in Hudson County, New Jersey. 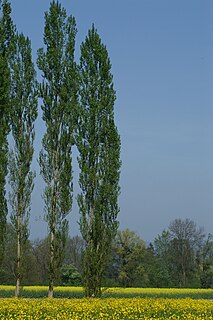 Maisland, or Mais Land, was an area in Hudson County, New Jersey. 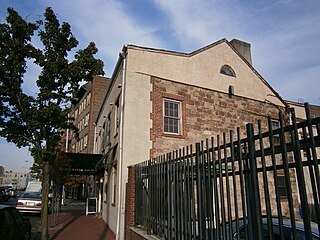 The Newkirk House, also known as the Summit House, located at 510 Summit Avenue is the oldest surviving structure in Jersey City, New Jersey. The two-story Dutch Colonial building, composed of sandstone, brick, and clapboard dates to 1690.

Maryn Adriansen was an early settler to New Netherland. Originally emigrating under an Indenture agreement he later become a prominent member of society. His conflict with the governor at the time led to accusations and, eventually, acquittal. He owned property in New Amsterdam and a large plantation at Awiehaken.