Three Rivers DC v Governor of the Bank of England

Three Rivers DC v Governor of the Bank of England [2001 UKHL 16] [3] is a UK banking law and EU law case concerning government liability for the protection of depositors and the preliminary ruling procedure in the European Union.

Depositors in the UK branch of Bank of Credit and Commerce International (BCCI) sought damages from the Bank of England for failing in its supervisory duties. The Bank had granted BCCI authorisation in a way that breached the First Banking Directive 77/780. The government argued that the Directive was not intended to give rights to individual depositors.

The depositors had to base their claim on the intentional tort of misfeasance in public office because in English law, it was not possible for the regulatory authority to be held liable for negligence in the exercise of its supervisory functions. [4]

The House of Lords held that the Directive was only a first step toward mutual recognition of authorisations of member states to credit institutions, and individual depositor protection was not an objective of the Directive. There was no need to refer to the ECJ. The delays and costs of making a reference were great, given the very small likelihood that they would have made a wrong interpretation.

Lord Hope said the Directive did not define a depositor and so did not define the class of persons who might have rights. Article 3(1) obliged member states to require credit institutions to have authority to operate, but BCCI had commenced before the Directive. Articles 6 and 7 did not impose any duty of supervision on national authorities.

This case essentially establishes that a Hansard can be used as an external aid to statutory interpretation. [2]

The Bank of Credit and Commerce International (BCCI) was an international bank founded in 1972 by Agha Hasan Abedi, a Pakistani financier. The bank was registered in Luxembourg with head offices in Karachi and London. A decade after opening, BCCI had over 400 branches in 78 countries and assets in excess of US$20 billion, making it the seventh largest private bank in the world. 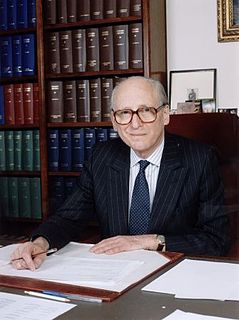 Thomas Henry Bingham, Baron Bingham of Cornhill,, was an eminent British judge who was successively Master of the Rolls, Lord Chief Justice and Senior Law Lord. He was described as the greatest lawyer of his generation. Baroness Hale of Richmond observed that his pioneering role in the formation of the United Kingdom Supreme Court may be his most important and long-lasting legacy. Lord Phillips of Worth Matravers regarded Bingham as "one of the two great legal figures of my lifetime in the law". Lord Hope remembered Bingham as "the greatest jurist of our time".

Deposit insurance or deposit protection is a measure implemented in many countries to protect bank depositors, in full or in part, from losses caused by a bank's inability to pay its debts when due. Deposit insurance systems are one component of a financial system safety net that promotes financial stability. 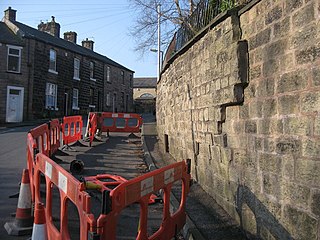 Anns v Merton London Borough Council[1977] UKHL 4, [1978] AC 728 was a judicial decision of the supreme court at its date, the Judicial Committee of the House of Lords. It established a broad test for determining the existence of a duty of care in the tort of negligence called the Anns test or sometimes the two-stage test for true third-party negligence. This case was overruled by Murphy v Brentwood DC [1991].

Ex turpi causa non oritur actio is a legal doctrine which states that a plaintiff will be unable to pursue legal relief and damages if it arises in connection with their own tortious act. Particularly relevant in the law of contract, tort and trusts, ex turpi causa is also known as the illegality defence, since a defendant may plead that even though, for instance, he broke a contract, conducted himself negligently or broke an equitable duty, nevertheless a claimant by reason of his own illegality cannot sue. The UK Supreme Court provided a thorough reconsideration of the doctrine in 2016 in Patel v Mirza.

Loss of chance in English law refers to a particular problem of causation, which arises in tort and contract. The law is invited to assess hypothetical outcomes, either affecting the claimant or a third party, where the defendant's breach of contract or of the duty of care for the purposes of negligence deprived the claimant of the opportunity to obtain a benefit and/or avoid a loss. For these purposes, the remedy of damages is normally intended to compensate for the claimant's loss of expectation. The general rule is that while a loss of chance is compensable when the chance was something promised on a contract it is not generally so in the law of tort, where most cases thus far have been concerned with medical negligence in the public health system.

Misfeasance in public office is a cause of action in the civil courts of England and Wales and certain Commonwealth countries. It is an action against the holder of a public office, alleging in essence that the office-holder has misused or abused their power. The tort can be traced back to 1703 when Chief Justice Sir John Holt decided that a landowner could sue a police constable who deprived him of his right to vote. The tort was revived in 1985 when it was used so that French turkey producers could sue the Ministry of Agriculture over a dispute that harmed their sales.

The Capital Requirements Directives (CRD) for the financial services industry have introduced a supervisory framework in the European Union which reflects the Basel II and Basel III rules on capital measurement and capital standards.

Ashby v White (1703) 92 ER 126, is a foundational case in UK constitutional law and English tort law. It concerns the right to vote and misfeasance of a public officer. Lord Holt laid down the important principle that where there is injury in the absence of financial loss (injuria sine damno) the law makes the presumption of damage and that it is sufficient to demonstrate that a right has been infringed. 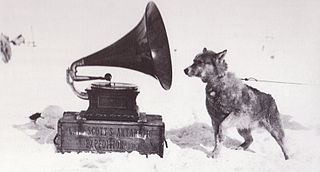 Unconscionability in English law is a field of contract law and the law of trusts, which precludes the enforcement of consent-based obligations unfairly exploiting the unequal power of the consenting parties. "Inequality of bargaining power" is another term used to express essentially the same idea for the same area of law, which can in turn be further broken down into cases on duress, undue influence and exploitation of weakness. In these cases, where someone's consent to a bargain was only procured through duress, out of undue influence or under severe external pressure that another person exploited, courts have felt it was unconscionable to enforce agreements. Any transfers of goods or money may be claimed back in restitution on the basis of unjust enrichment subject to certain defences.

Lister v Hesley Hall Ltd [2001] UKHL 22 is an English tort law case, creating a new precedent for finding where an employer is vicariously liable for the torts of their employees. Prior to this decision, it had been found that sexual abuse by employees of others could not be seen as in the course of their employment, precluding recovery from the employer. The majority of the House of Lords however overruled the Court of Appeal, and these earlier decisions, establishing that the "relative closeness" connecting the tort and the nature of an individual's employment established liability.

Illegality in English law is a potential ground in English contract law, tort, trusts or UK company law for a court to refuse to enforce an obligation. The illegality of a transaction, either because of public policy under the common law, or because of legislation, potentially means no action directly concerning the deal will be heard by the courts. The doctrine is reminiscent of the Latin phrase "Ex turpi causa non oritur actio", meaning "no cause of action arises from a wrong". The primary problem arising when courts refuse to enforce an agreement is the extent to which an innocent party may recover any property already conveyed through the transaction. Hence, illegality raises important questions for English unjust enrichment law.

Watkins v Home Office and others[2006] UKHL 17, was a UKHL case where the Home Office made an appeal as to whether the tort of misfeasance in public office was actionable in the absence of proof of pecuniary losses or injury of a mental or physical nature. The appeal was upheld, ruling that the tort of misfeasance in public office is never actionable without proof of material damage as defined by Lord Bingham of Cornhill.