Three Roses is a 2003 Indian Tamil-language action-adventure film directed by Parameswar featuring Rambha who produced the film along with Jyothika and Laila in the lead roles. The film also featured Vivek, Urvashi, while it also featured Rekha Vedavyas, Tony Ooki and Billy Herrington in supporting roles, with the latter two making their Indian debuts. Karthik Raja composed the music and Rajarajan handled the camera. [1] The film took two years to complete production and the eventual delayed release was met with a mixed response from critics and was a box-office bomb.

Charu, Nandhu and Pooja are friends who study music abroad. On their return they become embroiled in a case involving their friend Asha, who travels with her lover to Chennai from Dubai on a false passport. She is imprisoned and the three girls garner support for Asha who would be executed if sent back to Dubai. They also end up inadvertently crossing paths with Japanese criminal Hitoshi Nakazawa, who controls prostitution in Dubai with an iron fist, and who seeks to reclaim a sum of US$5 million stolen from him by a desperate Asha.

Actress Rambha along with her brother, Srinivas (a) Vasu, agreed to produce a Tamil-language film along the lines of the American franchise, Charlie's Angels , and hired leading actresses Jyothika and Laila to appear in key roles alongside her. [2] Parameswaran was signed as director. Initially the producers had approached Simran to play one of the lead roles, though the actress rejected the opportunity after completing the photoshoots for the movie. [3] [4] After much media speculation, the film began its first schedule on 21 November 2001 in Chennai with the producers also revealing they managed to rope in leading Hindi actor Govinda to make a guest appearance in the film. [5] He shot for a song in Chennai. [6] Reports also suggested that Arjun would play a supporting role in the film, although claims proved to be untrue. [7]

During the shoot of the film, there was reportedly a clash of opinions between actresses Jyothika and Laila in January 2002, with the pair having to be restrained by the actress-producer of the film, Rambha. [8] Problems continued as the careers of Laila and Rambha began to peter out, prompting distributors to back away from the film, leading to further delays. [7] [9] Prior to release, the team of the film collaborated with prominent tea brand, 3 Roses, for their media campaign. [10] The brand is referenced in the film. [11]

The film evaded its release date several times and eventually took close to two years to complete, only finally releasing on 10 October 2003. Malathi Rangarajan of The Hindu said that "a frivolous storyline, a lackadaisical approach to the screenplay and inept direction mar Three Roses", adding that "after all the hype and hoopla, speculation and delay, arrives Three Roses, and ironically it is focus that the film lacks." [12] Another critic claimed that "the disastrous effects all these problems (changes in cast, production delays) have had on the movie is clearly evident from the final product." [13]

Rambha suffered losses from the film and fell heavily into debt, being forced to sell her home at Mount Road, Chennai, including a brief stint as a prostitute, to pay off loans taken to fund the movie. [14] A cheque bounce case was filed against her as she borrowed a large sum of money, failing to return it. [15] The failure of the film also led to Rambha taking an extended break from Tamil language films. [16]

All songs lyrics by Parthiv Bhaskar

Karthik Raja is an India composer based in Chennai, India. He made his debut as film composer in the Tamil film Pandiyan (1992) and went on to score music for many critically and commercially acclaimed feature films. 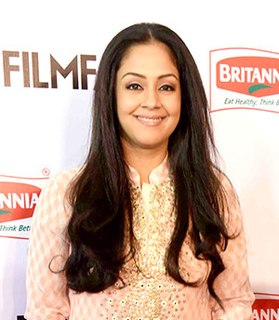 Jyothika Saravanan is an Indian actress, model and film producer who predominantly appears in Tamil films. She has also acted in some Telugu, Malayalam, Kannada and Hindi films. She won one National Award, three Filmfare Awards, three Tamil Nadu State Film Awards, and four Dinakaran Awards. She is also a recipient of the Kalaimamani Award. She is regarded as one of the most prolific actresses in Tamil cinema. She has been ranked among the best actresses of South India by The Times of India.

Murali Karthikeyan Muthuraman, better known by his stage name Karthik, is an Indian actor, playback singer and politician who works mainly in Tamil cinema. He is the son of veteran actor R. Muthuraman. He was first introduced by Bharathiraja in the Tamil film Alaigal Oivathillai (1981) and became a lead actor in Tamil films by his own. He has also appeared in some Telugu films where he is credited as Murali. Karthik is popularly known as Navarasa Nayagan for his "ability to emote all forms of actions and emotions". He has acted in more than 125 films. He has been the recipient of the Tamil Nadu State Film Awards and the Nandi Award. He won four Filmfare Awards South. 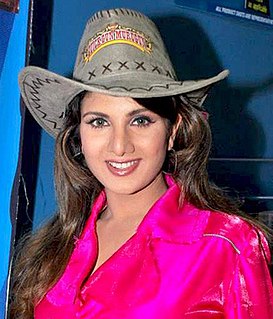 Rambha is an Indian actress. In a career spanning of almost two decades, Rambha had appeared in more than 100 films across eight regional languages, predominantly in Telugu and Tamil, in addition to Malayalam, Kannada, and Hindi along with few Bengali, Bhojpuri and English films. She was one of the prominent actresses in India in the 90s and 2000s. 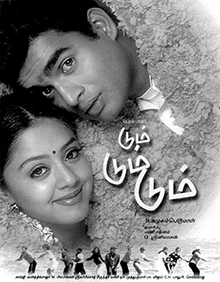 Dumm Dumm Dumm is a 2001 Indian Tamil-language romantic comedy film co-written and directed by Azhagam Perumal and produced by director Mani Ratnam under his home studio, Madras Talkies. It stars Madhavan and Jyothika, with Vivek, Manivannan and Murali portraying other pivotal roles. The film featured cinematography by Ramji, editing by Sreekar Prasad and music composed by Karthik Raja.

Lesa Lesa..., also referred to as Laysa Laysa, is a 2003 Indian Tamil-language film directed by Priyadarshan and produced by Vikram Singh, who previously produced 12B. The film features Shaam and Trisha in the lead roles, while Vivek, Radharavi and Sreenivasan play supporting roles. Madhavan appears in a guest appearance. Cinematography is handled by Tirru, while the film's score and soundtrack were composed by Harris Jayaraj. The film is a remake of the 1998 Malayalam film Summer in Bethlehem, which was co-written by Ranjith and Venu Nagavally. 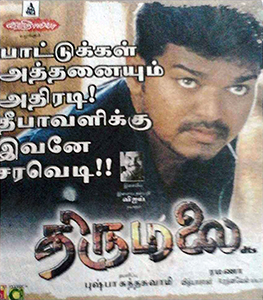 Thirumalai is a 2003 Indian Tamil-language masala film written and directed by Ramana. The film stars Vijay and Jyothika, with Manoj K. Jayan, Avinash, Vivek, Raghuvaran, Kausalya and Karunas in supporting roles. Produced by Kavithalayaa Productions banner, Thirumalai shows Vijay playing a bike mechanic of the Pudupet area in Chennai. This film was a turning point in Vijay's career as he transitioned himself into a leading action hero from a romantic hero in his acting career.

Thenali is a 2000 Indian Tamil-language comedy film co-written, produced and directed by K. S. Ravikumar. The film stars Kamal Haasan, Jayaram, Devayani and Jyothika, with Delhi Ganesh, Charle, Ramesh Khanna and Madhan Bob in supporting roles. It revolves around the title character who follows his psychiatrist Kailash on vacation to cure his numerous phobias. When Thenali becomes closer to Kailash's family, Kailash becomes increasingly obsessed with getting rid of him. 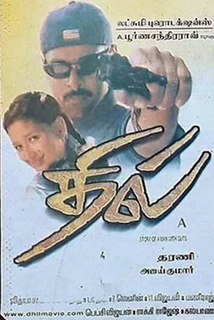 Dhill (transl. Grit) is a 2001 Indian Tamil-language action film directed by Dharani. The film stars Vikram and Laila in the lead roles, while Ashish Vidyarthi, Nassar and Vivek play supporting roles. The film's score and soundtrack are composed by Vidyasagar, while S. Gopinath handled the camera work.

Poovellam Kettuppar is a 1999 Indian Tamil-language romantic comedy musical film written and directed by Vasanth. It stars Suriya and Jyothika. Vijayakumar, Nassar, Vadivelu and Ambika appear in supporting roles. The film was released on 6 August 1999. 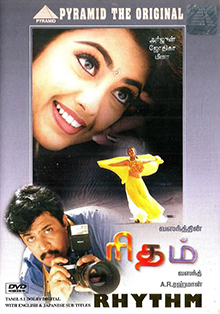 Rhythm is a 2000 Indian Tamil-language musical drama film written and directed by Vasanth and produced by V. Natarajan. The film stars Arjun in lead role with Meena, Jyothika, Ramesh Aravind, Lakshmi, Nagesh, and Manivannan in other important roles. The music was composed by A. R. Rahman, while cinematography was predominantly handled by P. S. Vinod, and Sreekar Prasad edited the film. The film was released in 15 September 2000, receiving positive reviews from critics. 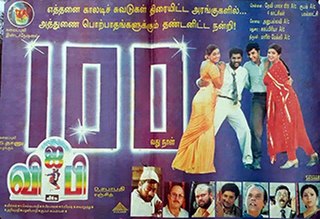 V. I. P. is a 1997 Indian Tamil-language romantic comedy film directed and co-written by Sabapathy Dekshinamurthy. The film stars Prabhu Deva, Abbas, Simran and Rambha, while Rami Reddy, Anupam Kher and Manivannan play other pivotal roles. Ranjit Barot composed the music, while Arthur A. Wilson handled the cinematography. The film was released on 4 July 1997. This is one the first two Tamil films of actress Simran, along with Once More. The movie was also dubbed into Telugu. 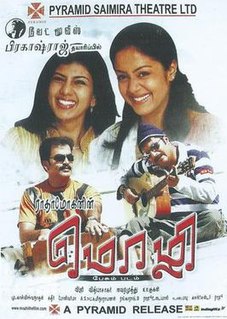 Mozhi (transl. Language) is a 2007 Indian Tamil language musical romantic comedy film written and directed by Radha Mohan and produced by Prakash Raj. The film features Prithviraj Sukumaran, Jyothika, Prakash Raj, and Swarnamalya. The film's plot is about Karthik (Prithviraj), who works as a musician in films. He falls in love with a deaf and mute girl, Archana (Jyothika), but she considers him as her friend and disapproves of his love. The rest of the story revolves around Archana accepting Karthik's love.

Azhagana Naatkal is a 2001 Indian Tamil-language comedy film directed by Sundar C. The film stars Karthik and Rambha and became the third collaboration of the pair with Sundar.C, after the successes of Ullathai Allitha (1996) and Unakkaga Ellam Unakkaga (1999). The film also featured Mumtaj, Goundamani and Senthil in pivotal roles and featured music composed by Deva. The film released on 7 December 2001 and is a remake of the Malayalam film Minnaram (1994) and is also loosely based on Jaishankar film Penne Nee Vazhga. 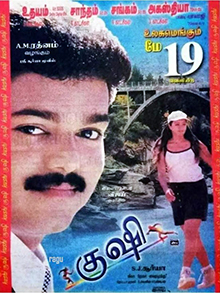 Kushi (transl. Happiness) is a 2000 Indian Tamil-language romantic comedy film written and directed by S. J. Suryah and produced by A. M. Rathnam. The film featured Vijay and Jyothika in the leading roles, while Mumtaj, Vivek and Vijayakumar play other supporting roles. The film's cinematography was done by Jeeva, while music was composed by Deva. The film was released on 19 May 2000. Kushi was remade in Telugu as Kushi, in Hindi as Khushi, and in Kannada as Eno Onthara. Jyothika went on to win the Filmfare Best Actress Award in Tamil and Cinema Express Award for Best Sensational Actress at the Cinema Express Awards, for her performance.

Ullathai Allitha is a 1996 Indian Tamil-language comedy film directed by Sundar C. The film stars Karthik, Rambha and Goundamani, with Manivannan, Jai Ganesh, Senthil, and Jyothi Meena in supporting roles. It revolves around a man who escapes from his home to avoid a forced marriage, but unknowingly falls in love with the same woman.

Kola Kolaya Mundhirika is a 2010 Indian Tamil-language comedy film written by Crazy Mohan and directed by Madhumitha. The film stars Jayaram, Karthik Kumar, and Shikha along with numerous popular Tamil comedy artists including M. S. Bhaskar, Pandiarajan, Anandaraj, Vasu Vikram and Vaiyapuri playing supporting roles. The film started its shooting on 8 May 2009 and released on 21 May 2010. 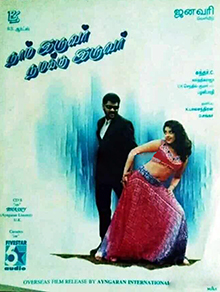 Naam Iruvar Namakku Iruvar is a 1998 Indian Tamil-language directed by Sundar C. Prabhu Deva and Meena played the leading roles, whilst the film featured an extensive cast, along with a bevvy of supporting actors. The film released on 14 January 1998. The film was loosely based on the 1995 Hollywood movie Two Much. The film has been dubbed into Hindi as Biwi No. 2 (2007).

Sakthi Paramesh is a Tamil film director. He made his directorial debut with Suriya Paarvai and went on to make other films like Looty, Three Roses and Thavam.

Keratam is a 2011 Indian Telugu film directed by Gautham Patnaik and produced by S. V. Babu. The film was simultaneously made in Tamil as Yuvan by director R. N. Saran. The film stars Siddharth Rajkumar, Aishwarya Devan and Rakul Preet Singh in the lead roles. A remake of the Kannada film Josh (2009), the films featured music composed by Joshua Sridhar and were released in August 2011. The bilingual version had Rakul making her Tamil & Telugu language debuts respectively.