Three Tales is a video-opera in three acts (titled Hindenburg, Bikini and Dolly) with music by American composer Steve Reich and visuals by Beryl Korot, his wife. It is scored for two sopranos, three tenors, string quartet, percussion, keyboards, and pre-recorded audio. Its premiere was at the Vienna Festival on May 12, 2002; the BBC had commissioned a version for television broadcast four months later. The 12-minute tale Hindenburg had been written (and recorded) in 1998, while the remaining tales were completed (and recorded) in the year of the premiere.

Stephen Michael Reich is an American composer who, along with La Monte Young, Terry Riley, and Philip Glass, pioneered minimal music in the mid to late 1960s.

The musical narrative of Three Tales follows "speech melodies" of pre-recorded interviews, and in many ways resembles Reich's works The Cave (1990–1993), City Life (1995) and Different Trains (1988). The libretto of Three Tales can be found on the website of the composer (see bottom of page).

The Cave is a multimedia opera in three acts by Steve Reich to an English libretto by his wife Beryl Korot. It was first performed in 1993 in Vienna by the Steve Reich Ensemble, conducted by Paul Hillier. The title "The Cave" refers to The Cave of the Patriarchs in Hebron, where Abraham and Sarah are buried.

Different Trains is a three-movement piece for string quartet and tape written by Steve Reich in 1988. Its original release was performed by the Kronos Quartet and won the Grammy Award for Best Classical Contemporary Composition in 1989.

Three Tales is a response to nearly a hundred years of modern technology, concerning the explosion of the Hindenburg, nuclear testings on Bikini Atoll, and the cloning of Dolly the sheep (drawing connections between genetic engineering and artificial intelligence). The different stories are told from various perspectives, with speech culled from interviews with eyewitnesses, audiovisual documentary material of both the Hindenburg and Bikini tragedies, and experts in computer science (e.g. Marvin Minsky and Kevin Warwick), artificial intelligence (Rodney Brooks), Rabbi Adin Steinsaltz, and genetic engineering (Richard Dawkins). 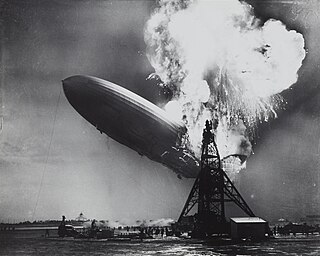 The Hindenburg disaster occurred on May 6, 1937, in Manchester Township, New Jersey, United States. The German passenger airship LZ 129 Hindenburg caught fire and was destroyed during its attempt to dock with its mooring mast at Naval Air Station Lakehurst. On board were 97 people ; there were 36 fatalities.

Bikini Atoll, sometimes known as Eschscholtz Atoll between the 1800s and 1946, is a coral reef in the Marshall Islands consisting of 23 islands surrounding a 229.4-square-mile (594.1 km2) central lagoon. The atoll's inhabitants were relocated in 1946, after which the islands and lagoon were the site of 23 nuclear tests by the United States until 1958.

Cloning is the process of producing genetically identical individuals of an organism either naturally or artificially. In nature, many organisms produce clones through asexual reproduction. Cloning in biotechnology refers to the process of creating clones of organisms or copies of cells or DNA fragments. Beyond biology, the term refers to the production of multiple copies of digital media or software.

Andrew McGregor wrote a positive review for BBC Music, stating that the video for the third act (“Dolly”) was the most effective and arguing that “Reich and Korot can't give you the answer [to where the human race is headed], but they frame the questions more memorably and insistently than most.” [2] Kila Packett also gave the opera a positive review in PopMatters ; she argued that the first act (“Hindenburg”) is the most musically satisfying and the third act the most thought-provoking, and interpreted the work as a “a bittersweet love letter romanticizing the tragic beauty of destruction and the inevitable folly of human achievement”, but she found Korot’s work on the first act to “lack visual imagination”. [3] Andrew Clements of The Guardian awarded Three Tales a full five stars, writing “The three movements get progressively weightier, more discursive, more visually inventive [...] this piece represents a quantum leap in complexity and technological achievement.” [4]

BBC Music is responsible for the music played across the BBC. The current director of music is Bob Shennan, who is also the controller of BBC Radio 2, BBC Radio 6 Music and the BBC Asian Network.

K Smith wrote an unfavorable review in Gramophone, stating that Reich and Korot seem oblivious to “how the Faustian pact with technology that they decry in society has also affected their own work.” Smith argued, “In both its emotional evocations as well as its compositional process, Three Tales is highly manipulative. [...] For artists so quick to criticise others for playing God, they prove vulnerable to the same temptation themselves.” [5] 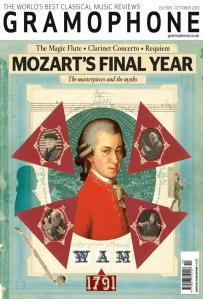 Gramophone is a magazine published monthly in London devoted to classical music, particularly to reviews of recordings. It was founded in 1923 by the Scottish author Compton Mackenzie. It was acquired by Haymarket in 1999. In 2013 the Mark Allen Group became the publisher.

Sir George William John Benjamin, CBE is an English composer of classical music. He is also a conductor, pianist and teacher.

Three Tales is the title of multiple works:

The Making of the Representative for Planet 8 is a full-scale opera by Philip Glass with a libretto by Doris Lessing based on her novel of the same name, first performed in 1988. Together with Glass's 1997 opera The Marriages Between Zones Three, Four and Five, it is part of a planned trilogy of operas based on Lessing's Canopus in Argos novels.

The Minotaur is an opera in two acts, with 13 scenes by English composer Harrison Birtwistle to a libretto by poet David Harsent, commissioned by the Royal Opera House in London. The work, a retelling of the Greek myth of the Minotaur, premiered at the Royal Opera House on 15 April 2008 under the stage direction of Stephen Langridge. The score is modernistic, and the scenes fall into three types: bullfights; scenes between Ariadne and Theseus; and dream sequences for the Minotaur, in which the creature has the gift of speech. The opera lasts about 140 minutes.

Love and Other Demons is an opera in two acts by Hungarian composer Péter Eötvös to a libretto by the Hungarian author Kornél Hamvai. It premiered on 10 August 2008 at the Glyndebourne Festival. The libretto is based on the novel Of Love and Other Demons (1994) by Gabriel García Márquez. The opera is the result of a commission by Glyndebourne and the BBC; it was broadcast in full on BBC Radio 3 on Saturday, 11 October 2008.

Bikini Atoll were a post-rock band formed in London, though Ché Albrighton is from Jugenheim, Germany, and Bastian Juel is from Denmark. The band was signed to the Bella Union label in 2004. They released two albums, Moratoria in 2004 and Liar's Exit in 2005.

The Glyndebourne Label is a UK-based record label founded in 2006 to release live recordings of Glyndebourne Festival Opera performances.

Der Sturm is a German-language opera in three acts by the Swiss composer Frank Martin to a libretto based on the Schlegel/Tieck German translation of Shakespeare's play The Tempest. It was premiered at the Vienna State Opera in 1955. The role of Prospero was originally conceived for Dietrich Fischer-Dieskau, but illness prevented him participating.

Radio Rewrite is a 2012 work for instrumental ensemble by American composer Steve Reich, inspired by two songs by British rock band Radiohead: "Jigsaw Falling into Place" and "Everything in Its Right Place". The piece represents the first time that Reich has reworked material from western pop/rock music. It has five movements, alternating fast and slow, and is scored for clarinet, flute, two violins, viola, cello, two vibraphones, two pianos and electric bass. The work premiered in London, UK in 2013, performed by the London Sinfonietta, to a generally positive reception. Much attention focused on the Radiohead material, with some reviewers praising how completely it is integrated, while others question whether Radiohead's style is suited to Reich's work. Alarm Will Sound made the first recording of the piece for an album of the same name released on Nonesuch Records in 2014. 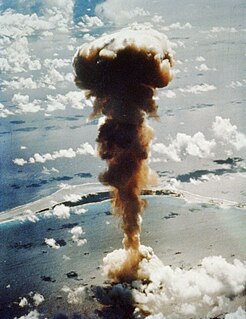 The nuclear testing at Bikini Atoll program was a series of 23 nuclear weapons detonated by the United States between 1946 and 1958 at seven test sites on the reef itself, on the sea, in the air, and underwater. The test weapons produced a combined fission yield of 42.2 Mt of explosive power.

La Commedia is an opera in five parts composed by Louis Andriessen. A retelling of Dante's Divine Comedy, the multi-language libretto was constructed by Andriessen using extracts from Dante's poem as well as several other sources including the Old Testament and the poetry of Joost van den Vondel. Andriessen describes the work as a "film opera" and collaborated closely with film director Hal Hartley in its development. La Commedia premiered on 12 June 2008 at the Koninklijk Theater Carré in Amsterdam.

The Winter's Tale is an opera in three acts by Ryan Wigglesworth. The libretto is by the composer, based on the play of the same name by William Shakespeare. The opera, in a production directed by Rory Kinnear, and conducted by the composer, was premiered at the English National Opera on 27 February 2017.

Lise Davidsen is a Norwegian opera singer. She came to prominence after winning the Operalia competition, and is known as a lyric dramatic soprano.

Reich Remixed is a remix album of music by the American composer Steve Reich. It was released in 1999 by Nonesuch Records and features tracks produced by various American, British, and Japanese DJs.